A Look Inside a Successful Composting Pilot in Charlottesville, Va.

Tucked in a rolling luggage carrier, frozen in 13-gallon compostable bags and layered in buckets, Charlottesville residents have been creatively toting their food waste to the popular City Market every Saturday since April in a collaborative composting pilot that has diverted nearly 5,500 pounds of waste from landfills.

The Virginia collective, which includes the city of Charlottesville, GreenBlue and Black Bear Composting, has grown from seven participants the first week to most recently, 53 participants dropping off their kitchen waste at the market.

“Before the program began, all waste generated at the City Market was collected as one waste stream and brought to a regional dirty MRF,” said Maya Kumazawa, public works program coordinator for the city of Charlottesville. “As other cities had demonstrated, establishing a composting component at the farmers market could be a springboard for increased composting awareness and participation.”

The city was awarded a grant from the Environmental Protection Agency to test out this composting initiative. In addition to collecting residential and market-generated organics, the city wanted to provide education and to collect data to inform future composting discussions. GreenBlue, an environmental nonprofit focused on the sustainable use of materials, was awarded the contract to handle all the market waste, says Ryan M. Cooper, project associate at the organization. 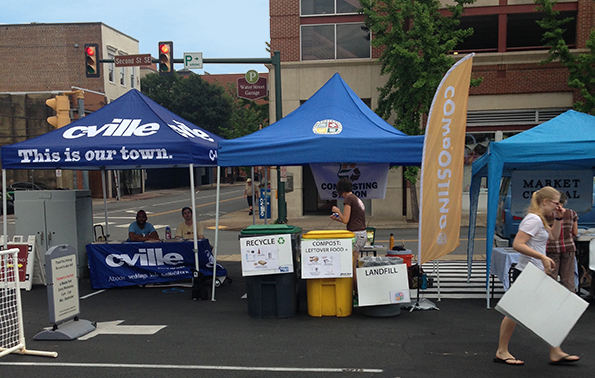 Cooper says, he, along with other volunteers, staff four waste stations located throughout the market, answering questions and providing guidance about how to properly dispose of materials.

GreenBlue also has a main station at the market with flyers and educational materials about recycling and about composting. He says an average of 36 residents – most of whom live in the city and don’t have an ability to backyard composting – participate every week and the average collection is about 210 pounds a week. On a recent Saturday, they collected 313 pounds.

“The average drop-off is about 5.5 pounds per participant,” Cooper says. “With 12,000 households in Charlottesville, and if everybody made 5.5 pounds a week, that's about 33 tons a week that we could be diverting if there was curbside collection.”

Having the composting presence at the market raised awareness and got many local citizens to take the next step of composting at home, said Eric Walter, chief composting officer at Black Bear Composting.

“The pilot program put some real numbers behind the anecdotal data that locals want a composting option,” Walter said. “Food composting is most definitely catching on in Charlottesville. The [University of Virginia], public schools, private schools, restaurants, caterers, hospitals, offices and special events are all getting on board, with new businesses starting programs every day. Charlottesville has a strong local food movement and people are beginning to understand how composting plays a key role in that cycle.”

The pilot ends Oct. 31 and the “what's next” piece is an open-ended question.

“This was a one-time grant, and so now comes the hard part of meetings with the city and city council meetings, and working with local churches and businesses to try to figure out what is the solution long-term,” Cooper says. “We're working on at least trying to run the pilot again next year.”

For the immediate future, the city is helping residents sign up for private residential collection as well as providing guidelines about backyard composting.

“The program has been very successful,” Kumazawa says. “We have only one month to go, but the number of participants and volume of composting is still increasing. The community engagement and support has been really positive.”

Walter would like to see the composting program become a regular part of the market and have the city try other pilots in different settings.

“While the ultimate goal for Charlottesville would be curbside compost collections, it’s valuable to try alternative collection methods in small, cost-effective, measurable pilots,” he says.