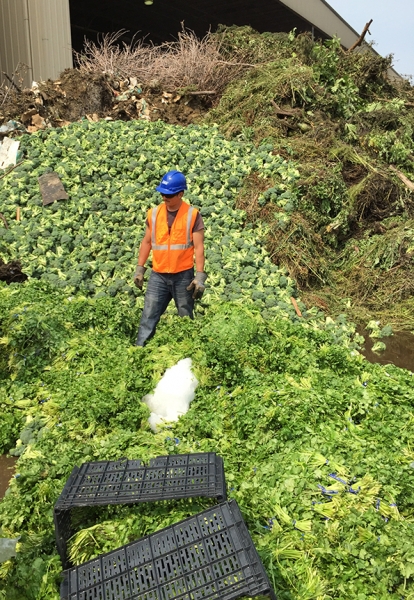 Highland Park will become one of the first cities in Illinois to offer curbside recycling of mixed organic waste when it rolls out its opt-in, three-bin system in April 2016.

The affluent Chicago suburb of about 9,000 residences is teaming with Lakeshore Recycling Systems (LRS) to target food scraps during the yard waste season from April 1 to Dec. 15.

(This story originally stated based on information supplied that Highland Park was the first Illinois city to offer such a program.)

Karen Brunetti, assistant to the city manager of Highland Park, says the new program is another step toward implementing the sustainability initiatives laid out in the city’s 2010 strategic plan. Creating a composting or organics program is one of the 90 goals spelled out in the plan.

Brunetti says the city piloted a similar program beginning in 2012 and had success with a few hundred homes participating.

“When we were approaching the contract renewal, we wanted to see just what the cost would be for adding an organics program into our actual franchise agreement,” she says. “We weren’t necessarily committing to anything, just wanted to see what the prices were and what the haulers could really offer us.”

LRS offered the city two options. The first was a year-round, three-bin system for the entire community with each resident paying an extra fee for the service. The second was an opt-in, three-bin system to coincide with landscape collection where the organics would be a commingled stream of yard waste and food waste and only the residents who wanted to participate would pay for it.

“When presented to council, the second option just seemed a little bit more favorable as a starting point for the city to see how residents would take the program,” Brunetti says. Currently, residents pay $236 for a landscape subscription that includes only yard waste. With LRS, that rate will go down to $225—about $26 a month during the season—and include the additional food waste component.

“They are also offering a volume-based organic collection, so what that means is if a resident doesn't want to do the subscription, but perhaps they still want to collect the food scraps, they can do that in a bin and attach a ($2.45) sticker,” she says.

“Highland Park is very progressive with a residential base there that cares about the environment,” Connell says. “I think it’s going to take off. Maybe not the first year, but I think the second year, it'll take off, because we're making it a very easy program and cost effective, too. Are we going to get 70, 80 percent participation? No, I don't think so. To me successful would be a third—about 3,000 homes participating—that would be a tremendous amount.”

LRS, which has about 200 collection vehicles throughout the Chicago area and five material recycling facilities (four of which it owns and one that it manages) will provide all participating residents with a complimentary 35-, 65- or 95-gallon plastic cart.

“We were quick to offer that at no additional cost, because the convenience of it not only for our drivers but for the residents, and it's easy to clean out,” Connell says.

Residents can toss their food waste in compostable bags—brown craft bags or biodegradable bags to keep the smell contained.

“We'll give them some ideas and some tricks and some things that will help,” he says. “As long as it's a compostable type bag or if they want to throw it in loose and clean out their cart each week, they can do that as well.”

Brunetti says the city is excited about the expanded organics recycling, adding that a 2014 survey of residents revealed that more than half would be interested in collecting and composting food scraps if the cost wasn’t too high.

“That tells us that they're willing to do it, so as long as it's economical for residents, then it's something that perhaps they would take advantage of,” she says. “There's a lot of focus and education on preventing waste from going to the landfill. This is one of those measures that the city can proactively take to reduce the amount of waste that's going to the landfill. Every tiny step that we make is hopefully going to, in the long term, have an impact.”