How a Michigan Food Waste Pilot Plans to Expand in 2016

After collecting 90,000 pounds of food and flower waste through its 20-week pilot food scrap collection program in 2015, officials with Emmet County Recycling hope to secure a state grant designed to prevent food waste to divert even more “low-hanging fruit” from their rural Northern Michigan landfill.

“As we systematically tackle the waste stream, food waste and organics is the next thing,” says Walker. She plans to apply for a Community P2 Grant Program from the Michigan Department of Environmental Quality (DEQ) to expand her area’s collection and composting pilot to include a broad array of private and public institutions.

The first time state funds have been aimed at incentivizing food waste prevention and reduction efforts, Michigan’s DEQ announced in late December that it will distribute $250,000 in grants. The effort furthers an initiative Gov. Rick Snyder announced in 2014 to double the state's residential recycling rate. Wasted food accounts for more than 20 percent of household trash—more than any other material. 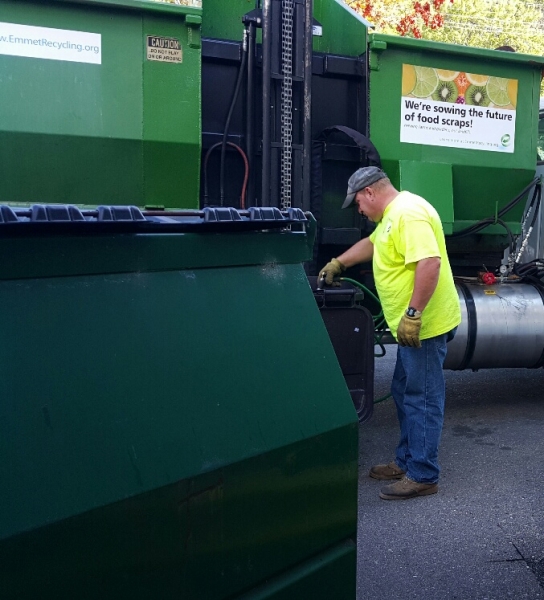 “We're looking to move the needle to actually divert tons of food waste from the landfill,” says Debbie Swartz, environmental quality analyst with the Michigan DEQ, which could award individual grants as much as $100,000, but recipients must match at least 25 percent of the amount they get from the state. “There's a big opportunity to increase recycling and diversion throughout Michigan and to raise the level of awareness with respect to the potential to divert this material and what can be done with it.”

“We really encourage partnerships because we can leverage a lot more money with partnerships and often projects are more successful when we have partners,” she says, adding that the state also is looking for program applicants to develop impactful, sustainable projects that can be replicated in other communities, institutions and organizations.

“It’s designed that the money will help a project get started but that it will be able to continue once the grant dollars have been used,” she says. “We also want to make sure that if an organization is going to be applying for a grant that they're committed to being in compliance and following the rules and regulations and best management practices.”

Walker says her community’s pilot was a three-phase program encompassing educational and outreach efforts to get restaurants and flower shops and their staff to divert all organic material, modifying their trucks to accommodate food scraps and expanding the area’s yard waste composting program to include the additional organic material. During the pilot, the county provided each business with 64-gallon curb carts and emptied and rinsed the carts two to three times a week, free of charge. They did it all on a $50,000 budget.

Winning a grant like this would be especially meaningful for implementing an extended second phase that would run from April to November, she says.

“It will help us cover the cost for potential institutions that might not necessarily be able to pay for the program such as a school or a not-for-profit business or organization,” Walker says. “Our program is very replicable based on the fact that we're a rural area and we’ve overcome a lot of the challenges that a lot of rural recycling programs face. Anything that's worked out well for us, we love to share that information on a state and national level whenever possible.”