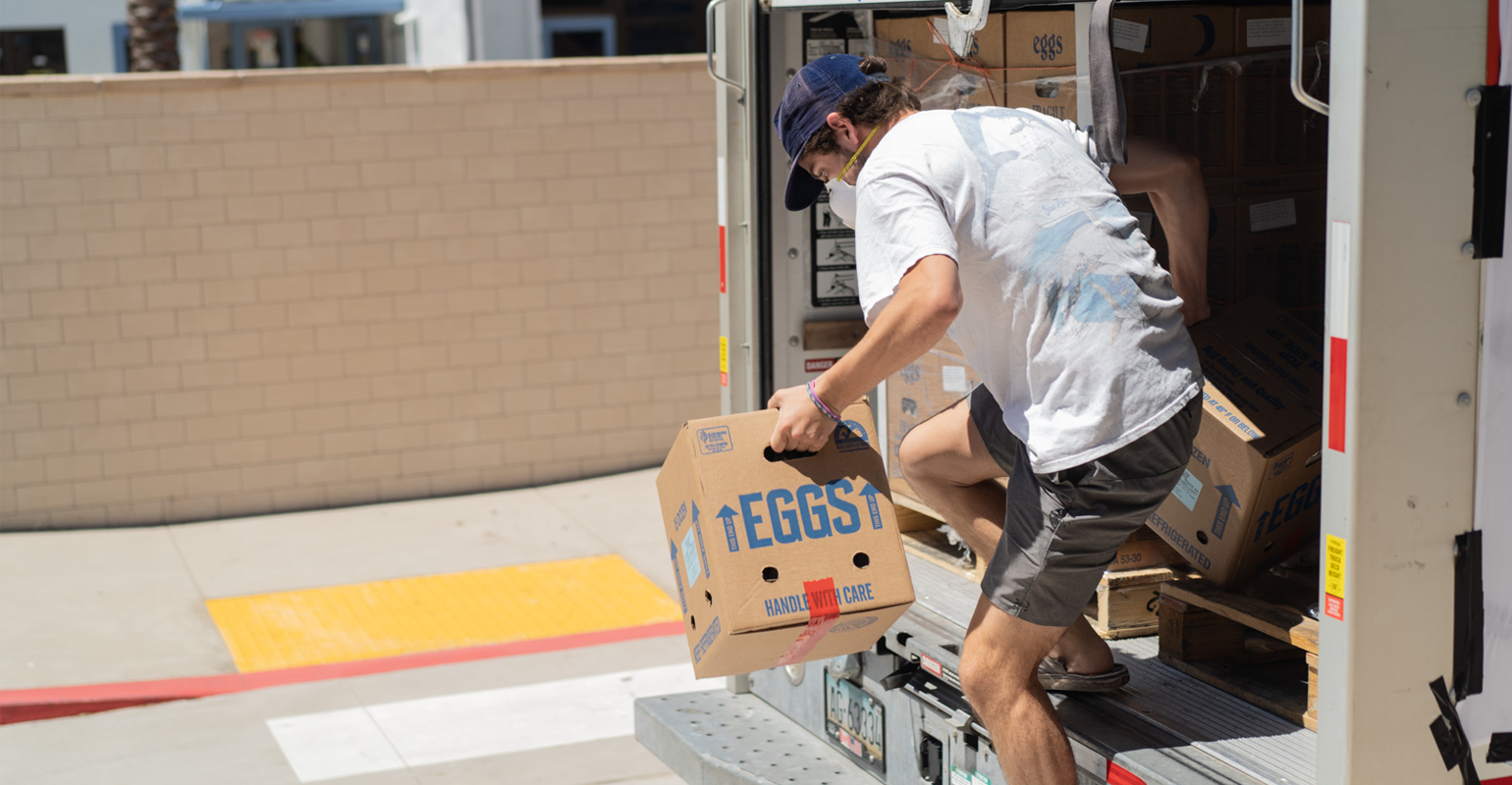 Nonprofit Farmlink is a child of the pandemic. This all-volunteer group was born on the West Coast after a few college students were watching the news as COVID-19 broke out, and hearing of massive volumes of good food getting tossed when food businesses shut down, leaving farmers with rotting surplus. At the same time, they watched coverage of food pantry lines that were growing to unprecedented lengths.  They rounded up some friends and collectively began calling local farms hoping to rescue some of that surplus and get it to foodbanks.

They secured their first loads – a lot of onions and potatoes –rented a truck, and drove the recovered edibles out to the foodbank themselves.

“In making the first few deliveries we saw that while the problem is huge and requires more engagement to address it now, it’s not unique. Food insecurity, happening alongside wasting of good food, has been going on for a long time,” says Caroline Spertus, Farmlink’s Deals and Logistics team lead.

The students stepped up their operation, forming several internal teams with different roles: outreach to farms to maintain those early relationships and grow new ones, as well as identifying more local food banks while also maintaining those first relationships. Then there’s what Spertus’ team does, which is end-to end logistics.

As of today, through the orchestrated operation hundreds of volunteers in 48 states have helped recover and distribute over 30 million pounds of food since April 2020.

They move what they salvage in one to three days, tops, as once these produce are pulled from the ground they have a short shelf life.

Spertus’ team is on call for notifications of loads from its volunteer peers who routinely go out to the farms. Shipments are closely monitored, from point of pick up till they reach their destination, as sometimes glitches happen.

“Once a truckload is picked up it doesn’t necessarily get to the foodbank and through its doors. Trucking is unpredictable. Occasionally a driver will have a flat tire or maybe a coolant leak. Or a foodbank that thought it could take the delivery no longer can.

“So, we need to be reactive and flexible. Sometimes if something goes wrong we have to be able to pivot,” Spertus says.

Staying in close contact with drivers and carriers and having a large network of foodbanks all help. It usually means being able to quickly reroute the shipment to a nearby agency and see it gets put to use.

Farmlink reaches out to foodbanks closest to the farms with surplus to assess for shelf-life requirements, capacity limitations, and to learn what the agencies need and want. There is plenty to consider in finding the right carrier too, like cost, what produce they can move, and capacity constraints.

While most loads are large – 25,000 to 40,00 pounds each, lately the nonprofit also is working to move smaller loads to accommodate various recipients capacity restraints. Volunteers look for carriers with the right size truck as to not waste space or money while seeing that even smaller volumes are rescued.

These young advocates give thought to that they are still new to food system work, and that the farmers and foodbanks have been involved for a long time.

“We are eager to help fill in the gaps, but they know this space best. We have conversations with our partners every time we pick up a load and check in and make sure we are doing our part in a way that works for farms and recipients,” Spertus says.

Peri & Sons Farms grow onions, shallots, and garlic in Nevada and a couple of cities in California.

The company has worked with Farmlink since August 2020.

The relationship has provided the operation with an additional outlet for perfectly edible onions considered off grade, ensuring that they end up in the hands of people in need. Through such partnerships the operation is salvaging 98% of its unsellable, offgrade onions, says Joe Bowers, Sales, Peri & Sons Farms. Before this crop was mainly returned to the field as soil nutrient, though some was thrown away.

What’s made the relationship with Farmlink work he says, is communication and the volunteer operation’s flexibility.

“Some weeks we can predict what we will have available while other weeks might not be so clear.  Farmlink has been great. The communication is outstanding, and they are willing to make pick up schedule adjustments if needed,” Bowers says.

Farmlink teams get the word out to communities through social media, email newsletters, and forums hosted over Zoom where “guests” learn how the nonprofit works and get to “meet” famers and foodbanks.

Fundraising has been key to survival. The student-run group has raised just over $6 million in the past year mainly through grants and individual donors.

Food recovery organization Chefs to End Hunger saw surplus dry up quickly as the pandemic crippled the food service supply chain.  No longer could it depend on the steady streams that historically came from food service operators, wholesalers, manufacturers, and farms, which it sent to feeding agencies in the southwest. It began working with Farmlink.

“The partnership has been most beneficial, providing a steady supply of farm surplus that we are able to divert to our agency partners,” says Brette Waters, program director, Chefs to End Hunger.

Now that the food service and hospitality industries are slowly rebounding, Chefs to End Hunger is rebounding too.

“However, the problem of food insecurity is still growing with no signs of slowing.  All of our agency partners continue to experience a growing need for access to healthy foods, and a continued partnership with Farmlink will help us fulfill those needs,” Waters says. ​

The question for Farmlink moving forward is, how does it make itself operationally sustainable well into the future?

Spertus is both optimistic but realizes there’s more work to do.

“We’ve been blown away by the support we’ve received through the pandemic, but we want to make sure people do not forget about the problem.”

Farmlink wants the goal of working to fix food system shortcomings to stay front and center in the minds of a specific population.

“We want to be driven by engagement from a younger generation. They have spirit and energy and the power to bring long-term change. So we will focus on food insecurity but also on getting youth to buy into doing this community service,” Spertus says.