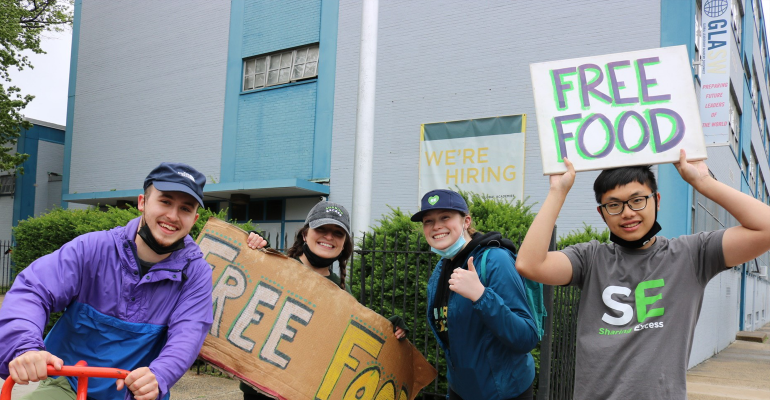 Youth typically like to ask a lot of questions and to explore, and when their curiosity leads to what they see as jarring, far-reaching problems, they like to belly up to the bar and help solve them. Knowing this, some of their educators, employers, and their entrepreneurial peers are challenging them to address some of the world’s most pressing environmental dilemmas: food waste, hunger, and other problems tied to a complex, flawed food system.

This article is part one of a two-part series. It dives into what’s happening in the food system space at a college with an innovative culinary and food science program. And it explores what a couple of young entrepreneurs who’ve joined the food waste fight have observed among their peers.

Stay tuned for part 2, and learn what one educator is doing to wake kids up to issues around food and the food system beginning at age 2.

Among corners of the country where youth are engaging in issues around the food system is Philadelphia at Drexel University, a research school with a Culinary Arts and Bachelor of Science program. Students – mostly 18- to 22-year-olds – apply technical skills in culinary arts, food science, and product design to real-world problems tied to food. And food waste is part of that.

Jonathan Deutsch, a professor and director of Drexel’s Food Lab, has seen that students who come into the classes he teaches want to take action.

“They don’t want to just sit in a lecture hearing about food waste problems, then take a test. They want to come up with solutions and engage deeply,” he says.

They learn about sustainability issues within the food system concurrent with other classroom lessons. The idea is that rather than just gain skills and knowledge to become chefs, food scientists, or hospitality managers, they can prepare to do more.

“They are applying their technical skills to address these real-world problems from the outset of their education. For example, instead of just focusing on making nice cuts that are uniform in size they also think about what to do with scraps and trim from a full product utilization and upcycling perspective,” Deutsch says.

Many of them move on to national or multinational food companies that are working toward more sustainable manufacturing practices. Or they may go to startups developing technologies to address food waste. Or nonprofits doing product development. But many students who come into these courses are not Culinary Arts and Science majors; they simply share their classmates’ curiosity about what’s happening along the supply chain and want to know how they might be able to help.

From what Deutsch sees, traditional college-age students tend to have more confidence that they can help to drive change than their predecessors.

“I feel like folks from my generation—(Gen X/pre-Millennials)— tend to think the problems we have are someone else’s problems and are being managed by experts. They would donate to a food bank and feel like they are doing their part by giving money or food to an established system. [Conversely], youth are more inclined to want to do the work themselves.”

“They believe the existing infrastructure is not adequate and there is a need to come up with more innovative and timely solutions,” Deutsch says.

Evan Ehlers, now a Drexel graduate, has gone on to launch a food rescue group. Today, Sharing Excess is powered mainly by 18- to 30-year-olds, considered Gen Z’s and Millennials; most are college students.

They respond to calls for action from people who have shown them the problems around food insecurity and wasted surplus firsthand. The message could be through social media or documentaries illuminating the scale of the problem, and they often come from those who are directly impacted by it.

“You are rescuing food from local grocers and restaurants because you have seen dumpster diving videos on TikTok (a video sharing social networking service). You’ve seen dumpsters filled with thousands of dollars of food,” Ehlers says.

They are inspired, he says because “This age group has a large intolerance for social injustice. They do not tolerate what harms people disproportionately and are frustrated to see the planet getting worse. Awareness around these issues is accelerated and made highly visible through social media,” he says.

The young volunteers Ehlers works with are intrigued by what they see as a culture centered around addressing the problems. Trying to help better the food system becomes a part of who they are and what they do on more than holidays. And it becomes all the more impactful when they incorporate it into their regular routines, he says.

It could be food rescue or creating urban gardens. Youth create community refrigerators with 24/7public access on the street. And they get involved in pop up distributions where larger quantities are distributed less frequently at tables and tents, perhaps at a park.

They do not typically have in depth expertise into the problems but more of them are aware than before. And if there is a call to action that has been popularized on social media, they will get involved, and are making more time for it, even if it’s to use their voice virtually.

“They are calling out policy makers, getting petitions signed, and getting donations made where they are most needed and effective,” Ehlers says.

That involvement is becoming more frequent while they are in college.

“That’s where the largest jump in volunteerism is because they are made more aware of issues and opportunities through their education and other people. This peaks their interest and passions. They feel they have to act to save their planet and their livelihoods as well as their children,” Ehlers says.

Twenty-four-year-old Jake Gutstein, founder and CEO of Zest, created a cooking app targeting Gen Z’s and trailing Millennials (about 22- to 32-year-olds). It not only teaches them how to prepare meals but is intended to open their eyes to food waste and other problems along the food supply chain.

In talking to people in that age group to inform the product design, Gutstein found that they are generally purpose driven but don’t necessarily have a way to practically apply what they care about in their daily lives when they cook or shop.

“They often have a lot of leftover raw ingredients that get thrown out, and that’s not consistent with where their values lie in limiting their own footprint. But as they learn more about food and how to cook, they are more intentional about what food they buy. They are thinking about their decisions,” he says.

While Gen Z’s say they care about the impact they have on the planet and want to make a difference, their time is short.

“They want to learn more, but when push comes to shove, for most of them, when they come home after work it’s typically going to be Netflix over learning about the workings of the supply chain. So, in designing the app, we worked to make it quick, easily digestible, and fun.”

Users begin with short videos, then written lesson overviews that are less than 1,000 characters. What they learn is reinforced through cost- conscious, environmentally sustainable recipes designed to use all perishables, even if they are making a single meal.

“Something we’ve seen is once Gen Z’s start connecting with food, when they buy it in grocery stores, they get curious about where what they are eating comes from. They start to look into that, and that’s where they become exposed to a lot of supply chain inefficiencies,” Gutstein says.

They like technology, and they identify with personalities. So Gutstein kept this in mind when designing both the platform and message.

Gutstein’s 23-year-old partner guides the video lessons “on camera.” An amateur chef who has developed creative content, he has worked with professional chefs who understand intricacies of the food supply chain. One of the main behind-the scenes guys is a former Starbucks executive who also created a sustainability-focused food ingredient start up; he helps create messages for the people Zest is targeting.

As they go out into the world, they want to make an impact. They want to learn more. And they want more than monetary payment, so some of the educators working in the sustainability space say encouraging youth’s involvement has to come from more than the classroom, apps, or social media.

One way is for employers to provide learning opportunities as benefits or bonuses tied to individual’s sustainability goals.

“Employers can bring in speakers and facilitate competitions with the overall theme being how to positively impact sustainability and creating lifestyle changes around waste. Still, what is key is that it has to start with prioritizing education,” Gutstein says.

Deutsch also calls on employers to get involved, whether to reach students or those new to the workforce. He suggests they offer robust internship programs to help develop future leaders.

“I think it’s the best way to engage youth with an interest in food waste, because we can only do so much in the class to prepare them professionally. It takes internships and on the-job development to get them where they need to be to become competent professionals who can make a difference.”