HomeOrganicsFood WasteFeeding America and the Farmer’s Impact to Reduce Food Waste
Recent
Machinex Upgrades West County Resource Recovery in California
May 27, 2022
EREF Hosts Record-Breaking Charitable Auction, Proceeds Directly Support Scholarships and Scientific Research
May 27, 2022
This Week in Waste: Top Stories May 23 - May 28
May 27, 2022
Landfill Emissions Measurement: What We Know, What We Need to Know
May 27, 2022
POLL
SWANA & Oceans Caucus Foundation Host Congressional Briefing on Recycling
May 27, 2022
Collaboration Leads the Way in Connecticut to New Extended Producer Responsibility Law for Management of Discarded Residential Gas Cylinders
May 27, 2022
An Uber-Style Service for Curbside Recycling
May 26, 2022
S&B Selected as Contractor for New Hope Energy’s Advanced Plastics Recycling Unit
May 26, 2022

Feeding America and the Farmer’s Impact to Reduce Food Waste 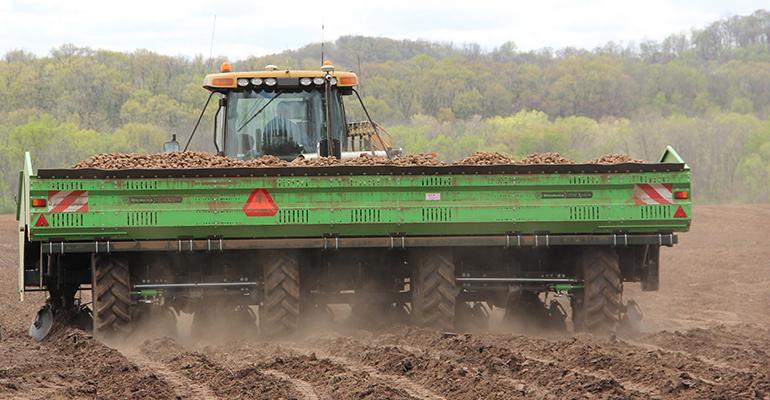 Feeding America’s National Produce Program strategy works with farmers and food banks to reduce food waste and distribute food to those in need.

Before 2009, when Feeding America’s network of 200 food banks established the National Produce Program strategy, few food banks had a produce plan in place, leaving billions of pounds of edible fresh food to go to waste.

Now, under its National Produce Program strategy, all 200 food banks in Feeding America’s network can disseminate healthier food options like fruits and vegetables to the network’s 60,000 food pantries and other meal programs. Feeding America and food banks partner with growers and industry experts to identify and secure bulk sources of fresh fruits and vegetables, including but not limited to potatoes, onions, carrots, cabbage, sweet potatoes, apples and oranges.

Ten years since the program’s inception, produce donated by farmers and growers makes this program the No. 1 category of food distributed by the network. Feeding America provides produce expertise, tools, grant funding and transportation solutions to food banks that need it, while other food banks work autonomously under the program.

“In America, approximately 72 billion pounds of perfectly good food, from every point in the food production cycle, is lost each year and ends up in landfills or incinerators,” Thompson points out. “For example, in just the farm channel, 20 billion pounds of fruits and vegetables are discarded on farms or left in fields and plowed under.”

“Crop, dairy and poultry farmers across the country gather food they have carefully cultivated for months, but sometimes their items cannot be sold to grocery stores, restaurants and other businesses for several reasons,” he adds. “This gives farmers an opportunity to donate unsold or excess produce, protein and/or dairy to the network, meaning this healthy food reaches empty stomachs rather than landfills.” 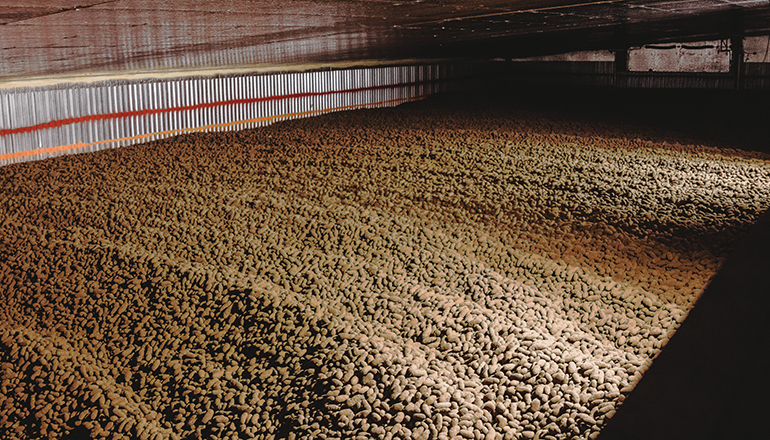 Alsum Farms is a national distributor of Wisconsin potatoes and onions and distributes a full line of 300 fruits and vegetables in the Midwest, along with locally grown produce. Alsum has a fleet of nearly 30 tractors and 80 refrigerated trailers delivering produce to retail and foodservice customers locally and throughout the nation.

“Farmers always want to grow the best quality crop that they can, and we always want to bring that crop to market in the most efficient process,” says Christine Lindner, national sales and marketing associate for Alsum Farms & Produce. “We recognize that there is waste along the value stream process in terms of both crop quality and the process of bringing the crop from field to market. We work hard to minimize the crop loss and the value loss during the field to market process.”

Under the U.S. Department of Agriculture (USDA), potatoes that are sold as “unclassified” are nutritionally good but do not meet the standard of a USDA No. 1 grade potato due to being misshapen, too much skinning, slightly more internal defects or discoloration. Alsum Farms & Produce’s value brand, Family Favorite, is a No. 2 potato also known as “unclassified” and fits the ever-growing ugly produce trend. 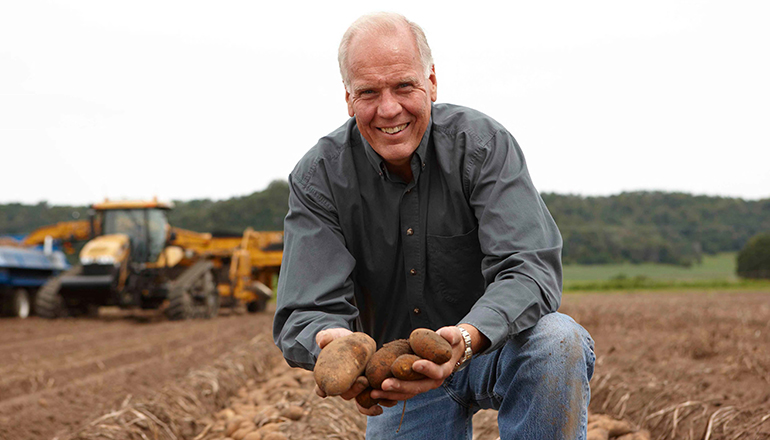 “Farmers have a passion for the entire agricultural value chain. We are engaged from working the soil to planting the crop until the crop is harvested and brought to market,” says Lindner. “We have a holistic view of the entire value chain, and we want to be good stewards of our land, water and resources used. Part of this stewardship is to make sure that we keep food waste to a minimum.”

The commercial market for fresh produce has raised quality expectations for produce over the past 20 years. Some of these changes have been for cosmetic reasons, and a lot of good quality produce has been moved to the No. 2 grade. In some cases, this produce was disposed of, adds Linder.

“The opportunity to work with food banks such as Feeding America has given us a great opportunity to provide some of this No. 2 grade produce to food banks at very reasonable prices that give the food banks a value and allow the farmer to obtain a slightly better return than culling for cattle feed,” she explains. “This has allowed the farmer to collaborate with food banks via Feeding America’s network to provide people who have a need for nutrition with a low cost and good value.”

In addition to working with farmers, another goal of Feeding America’s produce strategy is to increase the amount of fresh produce and nutritious food distributed to all 200 food banks in the Feeding America network.

“That’s why food banks continuously form and nurture relationships with farmers—to help increase donations of local produce and get that produce in the homes of the one in nine people in America struggling with hunger,” notes Thompson.

New York City-based City Harvest works with 2,000 unique donors in New York City and throughout the country to distribute food to roughly 400 partner agencies within the city’s five boroughs. They range from small food pantries that are doing weekly or bimonthly distributions to large soup kitchens that have a daily meal service. 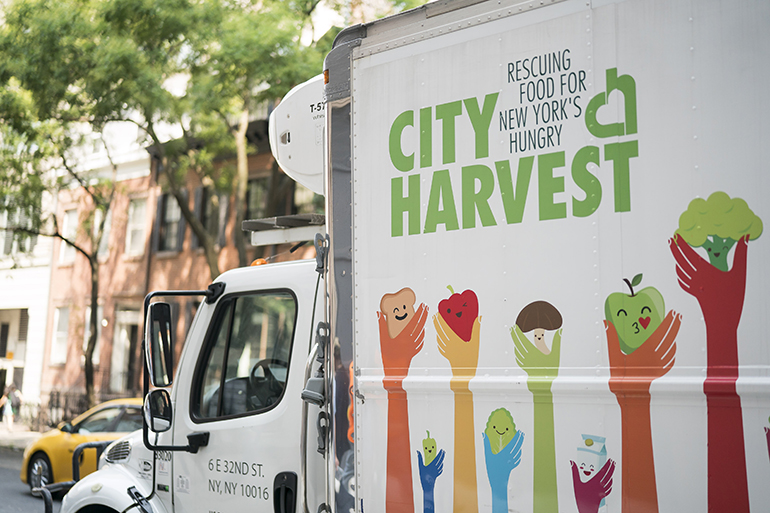 “One of the interesting things about City Harvest is that we have grown quite a bit from when we started in 1982. But around 2012, we really took off in terms of our poundage, and since then, we have doubled what we do in terms of distributions,” explains Hoffman. “A lot of that definitely has to do with being a Feeding America member; it just opens up a lot of doors in terms of having access to their entire donor network and then also being able to work with the 200 partner food banks that are all over the country.”

City Harvest utilizes Feeding America’s Produce Matchmaker, which is the organization’s main apparatus for distributing produce. It’s essentially an online produce auction that provides access to partners and donors from all over the country.

So far, through the first half of City Harvest’s fiscal year, Hoffman says the organization has brought in around 3 million pounds through Feeding America’s produce network, specifically via Produce Matchmaker.

“That is already doubling what we have done in our previous fiscal years,” he says. “This year alone, we’ve gone to Washington state, Oregon, California, Texas, Florida, Georgia, Idaho and really all over and brought in a number of awesome produce loads that we just don’t have direct access to here. It gives us an opportunity to bring in a diverse range of produce, and that’s pretty much our largest goal here in terms of distribution.” 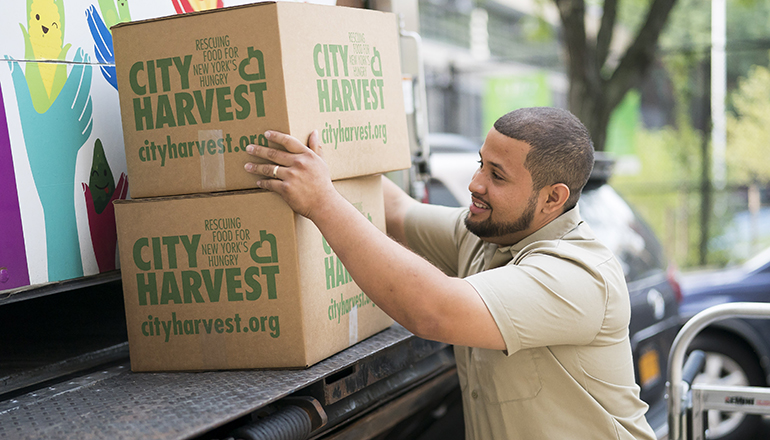 In New York City, statistics show there are 1.2 million New Yorkers who face some form of food insecurity. And City Harvest is looking to fill that gap.

“If we’re not looking throughout the entire country, we are probably not doing a good enough job with that. So, in terms of feeding New Yorkers and our neighbors, we have to look toward every single opportunity that allows us to do that,” explains Hoffman. “We also don’t want to just blindly send out food. We want to send out a true variety of both produce and non-produce. It’s very important to us in terms of our strategic goals to have high levels of a mix of commodities. Produce Matchmaker and Feeding America allow us to do that.”

Moving forward, Feeding America is working to expand the program to recover and distribute more perishable products, particularly dairy and protein. Milk, for example, is a source of protein for people facing hunger, but the USDA estimates tens of millions of gallons of dairy products are wasted each year.

Feeding America says it is working on a unified strategy to help form stronger relationships with constituents across the agricultural industry and the USDA to rescue dairy and protein.