HomeOrganicsFood WasteEREF Study Digs into the Risks of Food Waste
Recent
Machinex Upgrades West County Resource Recovery in California
May 27, 2022
EREF Hosts Record-Breaking Charitable Auction, Proceeds Directly Support Scholarships and Scientific Research
May 27, 2022
This Week in Waste: Top Stories May 23 - May 28
May 27, 2022
Landfill Emissions Measurement: What We Know, What We Need to Know
May 27, 2022
POLL
SWANA & Oceans Caucus Foundation Host Congressional Briefing on Recycling
May 27, 2022
Collaboration Leads the Way in Connecticut to New Extended Producer Responsibility Law for Management of Discarded Residential Gas Cylinders
May 27, 2022
An Uber-Style Service for Curbside Recycling
May 26, 2022
S&B Selected as Contractor for New Hope Energy’s Advanced Plastics Recycling Unit
May 26, 2022

EREF Study Digs into the Risks of Food Waste 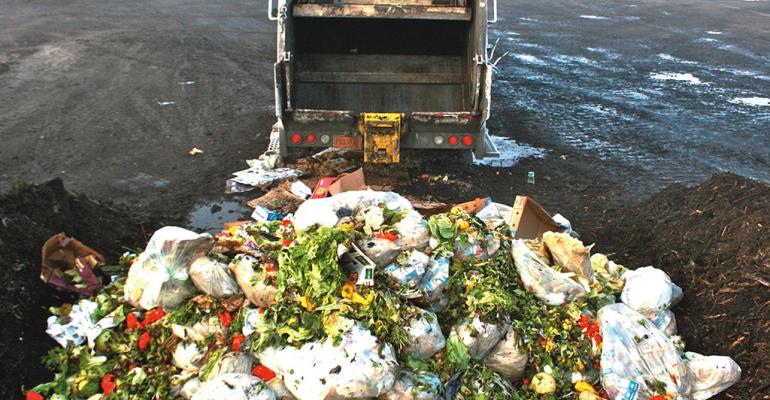 As states and municipalities enact policies and programs to try to recycle and divert food waste away from landfills and incineration with energy recovery, researchers at the University of Maine wanted to know what risks were associated with that effort. For example, do organic waste diversion mandates result in in higher levels of physical contaminants, such as glass, plastics and other non-compostable materials? Are there added levels of chemical and biological compounds from the mandates as well, including emerging contaminants (those compounds not yet regulated)?

The answers to these questions are important for several reasons. First, composting and anaerobic digestion facility operators believe they are seeing increased non-compostable contamination, which they say overburdens their operations and adds costs.

But another concern revolves around introducing contaminants harmful to humans, such as heavy metals and pathogens, back into the food system. For example, food and other organic wastes can be turned into soil amendments through composting and used on gardens and fields. But that means any contaminants still residing in the waste could be reintroduced back into the food chain through crop production.

Recycling is further challenged because both the Environmental Protection Agency (EPA) and the U.S. Department of Agriculture (USDA)hope to divert 50% of food waste going to landfills by 2030.

With funding provided by the Environmental Research & Education Foundation (EREF), researchers at the Senator George J. Mitchell Center for Sustainability Solutions at the University of Maine set about finding answers to these questions by collecting and analyzing food waste from two mandated food separation states (Massachusetts and Vermont) and one unregulated state (Maine). They also sampled waste from six different sources – groceries, hospitals, schools, restaurants, retirement communities and residential pick-up and drop-off locations. The food waste was processed in an industrial-grade food processor, stored at -20°C, and then shipped to the Maine Soil Testing Lab at the University of Maine for analysis. Seventy-one samples were submitted.

In addition to sampling different food wastes, the researchers also wanted to know what perceptions food waste handlers had about the waste they were processing. For example, were their suspicions that mandated food separation was contributing to an increase in physical, biological and chemical contamination backed up by the science? And what were their perceptions about which kinds of chemical and biological contaminants were being collected along with the food waste?

The overall results surprised both the researchers and processors.

First, the researchers found that mandated food source separation had no appreciable effect on contamination rates. In fact, both mandated and non-mandated communities had similar levels of contamination, whether it was physical (such as plastics), biological (such as common foodborne pathogens, like Salmonella) or chemical (such as Per- and poly-fluorinated organics (PFAS)). Researchers suggested the results could have been from effective communication and outreach strategies in the roll-out of the food waste diversion efforts in Massachusetts and Vermont.

Second, the perceptions of the composting and anaerobic digestion facility operators were different than reality. The operators believed there was appreciably more contamination rates in the communities where food waste diversion was mandated.

As far as the different types of contaminated materials that were found in the samples, they broke down into several distinct groups: heavy metals, organohalogens, PFAS, and antibiotic resistance genes.

Eighty-two percent (82%) of the samples had some form of contamination, whether they came from a state with mandated separation or one that was unregulated. Furthermore, samples in both environments had similar non-compostable materials, such as plastics, gloves, and fruit stickers. There were some variations in terms of where the food waste originated. For instance, residential samples had significantly higher copper than retirement community and hospital samples, which were higher than restaurant or school samples.

As for what chemical or biological contaminants were found in the samples, researchers discovered a number of different compounds. For example, researchers found a number of heavy metals in the samples, such as lead, chromium, cadmium, nickel, tin and titanium. However, the concentrations were all below the most stringent regulatory limits for soil used for comparison (75 and 25 mg/k), with the average concentrations being 21 and 4 mg/k and the maximum concentration being 71 and 14 mg/k respectively.

The samples were screened for three common foodborne pathogens as well -- Listeria monocytogenes, non-typhoidal Salmonella, and shiga-toxin producing Escherichia coli (STEC) – and while the pathogens were found in two of the samples, researchers concluded that there was a relatively low incidence of pathogens in the food wastes they tested.

They also screened for organohalogenated compounds, which are synthetic organic compounds that contain chlorine, bromine, and fluorine. Due to their persistence and bioaccumulative nature, these compounds lead to environmental contamination and human exposure through multiple pathways such as direct skin contact, inhalation, drinking water, and primarily food. Most of the sample, however were below the detection limit of 5 mg/kg wet weight, but 10 samples had measurable values that ranged from 5 – 89.7 mg/kg (ww), with all but the highest (ME restaurant) less than 12 mg/kg.

Also found in the samples were different versions of PFAS (Per- and poly-fluorinated organics), a widely used industrial chemical compound. Fourteen of the samples had detectable perfluorobutanoic acid (PFBA) average 0.6; range 0.11-1 μg/kg); two contained perfluorohexane sulfonic acid (PFHxS) 0.11 and 0.15 μg/kg); and one contained perfluorononanoic acid (PFNA) 0.28 μg/kg). The fact that a large number of the samples contained a PFAS compound was of concern to researchers because of the impacts these chemicals have on health and their potential to bioaccumulate.

Researchers also observed that food contact papers could be a source of contaminants, such as PFAS (Per- and polyfluoroalkyl substances), particularly at facilities that accept and compost coated papers with their food waste. This is an important finding as regulations are being proposed in different states to manage PFAS exposure. For example, the state of New York recently enacted a law prohibiting the use of PFAS chemicals in food packaging.

Another area of concern for the researchers was antibiotic resistance genes (ARGs). Antimicrobial resistance occurs when microbes evolve mechanisms that protect them from the effects of antimicrobials. When antibiotics are used in humans or animals, approximately 80 - 90% of the ingested antibiotics are not broken down, but pass through the body intact and enter the environment as waste. Thus, they retain their ability to affect bacteria and promote antibiotic resistance even after they enter the soil or water as a waste product.

Three ARGs were screened in the study due to the use of the corresponding antibiotics in livestock (penicillins and tetracylines) -- tet(M), blaTEM and mcr-1. Sixty-eight (96%) samples were positive for tet(M), although 11 were below the researchers’ limit of quantification.

BlaTEM was also detected in 97% of samples, although six of these detections were below their limit of quantification. β-lactams and tetracycline antibiotics are among the oldest antibiotics, have been extensively used including in livestock rearing in the US, and resistance genes were detected and isolated in food for a number of years.  This could help explain the near ubiquitous detection of these antibiotic resistance genes in their food waste samples.

To better understand the perceptions of facilities that manage food waste related to contaminants, the researchers sent surveys to 118 composting and anaerobic digestion facilities in Maine, Vermont and Massachusetts, from which they received 33 responses (28% response rate). The majority of respondents accepted waste from food processors, followed by material from grocers, restaurants, institutions, and residences.

What did the researchers learn?

Facilities who responded to the survey were primarily concerned about physical contamination, a problem confirmed with the results (82% of samples contained non-food waste). However, some did mention potential trace chemical and biological contamination, but without much of a sense of the magnitude of the problem. Researchers also noted that much of their concern was about contamination of the carbon sources added to food waste during composting (wood chips, hay, bedding), which was not measured.

The Emergent Risks of Food Waste Recovery: Characterizing the Contaminants in MSW Organics from Different Sources