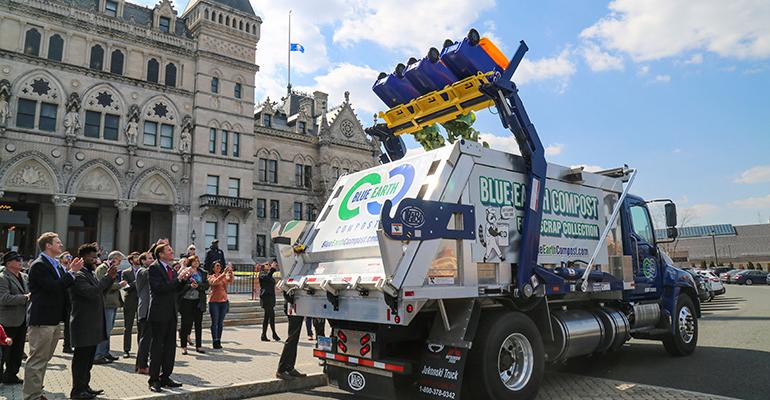 Blue Earth Compost celebrated the addition of Connecticut’s first commercial food scrap collection truck at a ribbon cutting ceremony on March 20. Blue Earth’s Alexander Williams and Sam King, along with their team, were joined by Rep. Brandon McGee, Majority Leader Matt Ritter, Hartford Mayor Luke Bronin, Nisha Patel of the Department of Energy and Environmental Protection, City Councilwoman Wildaliz Bermudez and Sen. Richard Blumenthal as they celebrated their latest addition with a ceremonial tip at the State Capitol in Hartford.

“This truck greatly increases our capacity and flexibility and positions us to become the largest diverter of food scraps in the state,” said Williams, Blue Earth’s owner and operator, in a statement. “Keeping food scraps out of the waste stream provides a significant opportunity to meet the future needs of the state and new infrastructure. Blue Earth’s truck represents a significant step in the right direction to meet the state’s ambitious recycling goal of diverting 60 percent of its municipal solid waste through reductions, reuse, recycling and composting by 2024.”

The food scraps Blue Earth diverts from incineration mitigate millions of pounds of greenhouse gases from entering the atmosphere each year.

“For every 35 pounds of food we’re able to divert, it’s environmentally equivalent to a gallon of gas not being burned and 20 pounds of carbon dioxide not going into the atmosphere,” said King, marketing and business development for Blue Earth, in a statement. “It also makes more soil. There are so many environmental benefits. It’s really one of the key ways our state can be a more sustainable place.”

Blumenthal echoed that sentiment in his remarks, “Food is the single largest contributor to landfills and composting is one of the simplest solutions. It’s great to see Blue Earth Compost finding innovative, sustainable answers and bringing the food waste revolution—in truck form—to a larger part of the Connecticut community.”

The purchase of this truck was made possible with help from a CT Department of Economic and Community Development loan and contributions received through a successful crowdfunding campaign. Blue Earth Compost is now positioned to be the largest diverter of food scraps in Connecticut and has already diverted more than 4.6 million pounds since 2013, according to the company.