As the push to recycle and divert organics, and particularly food waste, continues to grow, so do the challenges. And nowhere is that more apparent than in the back of a garbage truck.

Haulers and truck body manufacturers increasingly are pressed these days to adapt the basic waste truck to the range of unique concerns that food waste collection and organics in general present.

The problem starts with the definition. “It’s a big challenge in the industry right now, where people are using terms like food waste and compost interchangeably at times, and organics, and they mean one thing in one area of the country and something different in another,” says Eric Myers, director of organics at Houston-based Waste Management Inc.

If it’s just food waste being picked up, “That’s a pretty soupy mix,” says Skip Berg, national sales manager for Levis, Quebec-based truck body maker Labrie Enviroquip. “And traditional units don’t handle that well. Whenever you try to run a packer panel or push-out blade or anything through that kind of payload, it goes everywhere. Squishes out, comes around, gets in the cylinders, it’s hard to seal these things.” Myers says sometimes extra plates need to be added to control the slop from getting out of the truck.

With residential organics, food waste and yard waste often are combined, although with that mix often less than 10 percent by weight is food waste, Myers says. With commercial facilities, the big challenge is water and weight. The weight of the material could be 1,000 pounds a yard or more–much heavier than municipal solid waste (MSW). If there are a lot of commercial stops, the truck’s weight can become a road concern.

“Being aware of the weight restrictions and the proper sizing of the chassis is all important if you get into a steady diet of it,” says Phil Allen, vice president of sales for Scranton, Iowa-based Scranton Manufacturing Co. Inc., maker of New Way Trucks.

Other body manufacturers that have unveiled organics packages recently include Brown Industrial and McNeilus Truck & Manufacturing.

Food waste is acidic, and that can lead to changes in the containers from corrosion, says Marty Tufte, director of fleet for Waste Management. And the truck equipment has to be able to pick up all types of containers that can be very heavy.

“Roll carts, for instance, your normal conventional semi-automated tipper in the back of a rear loader might not do it,” he says. Waste Management has some specially designed lifting mechanisms for front loaders to address those issues.

Some cities such as Boston and Washington, D. C., have height restrictions on vehicles, so haulers can only get into a lot of spaces with a rear loader. “We have to make sure we have the rear loaders set up to be able to handle that, with the higher splash plates and things like that,” Myers says.

Another factor is when the food begins to naturally break down in the container, and that generates more liquid.

The industry tries to come up with a variety of tricks to adapt for food waste, Allen says. They can include a leachate tank to collect the liquids, and trying to modify the seals to make them more liquid tight. “But it doesn’t address the problem; it’s just a band-aid,” he says. “Trying to make an existing truck into an organics truck isn’t a good fit.”

Not Your Father’s Garbage Truck

New Way built a truck it hopes is the best of both worlds: A truck body designed for organics collection, but it also can pick traditional trash. It uses an auger instead of a packing blade, so food waste can’t get behind it, plus the food waste gets some pre-processing, Allen says.

Labrie builds a couple of units suited for organics. One takes the packing cylinders outside the containment area, and the mechanism works on a pendulum motion.

Waste Management operates special organics front loaders, which by design take care of some of the sealing issues. The company uses them specifically for organics collection, although they could be used for MSW, Tufte says.

“It gets a little difficult some times. It’s fairly easy to make a transition from organics to a residential stream, but if you have a specific organics truck sometimes it gets hard to go to full-on commercial. Because that (traditional) waste can be much bulkier, heavier, much more construction, manufacturing and all of those things in there where the packing devices are not going to be conducive to that kind of waste. Versus organics where you really don’t need a lot of packing pressure to break down the waste to get a legal payload.”

But the modifications aren’t excessively difficult to engineer, Tufte says, and the truck manufacturers have been good partners to work with on the technology changes.

But it does make the truck more expensive, both to purchase and to maintain. And generally the truck is limited in its collection use if it’s specialized, so that reduced scale increases costs.

“It’s certainly more expensive to collect food waste than it is to collect MSW,” Myers says. “It’s for a whole variety of reasons. One is routing efficiency. Not every customer is a food waste customer.

“The weight is another issue. Overall participation rates. We have communities where there’s really high participation rates, and other places where it’s not as high. So obviously that affects efficiencies. It can be pretty significant, the increase in transportation costs.”

The increased demand and pressure for organics/food waste collection has been gradual enough so far that it’s been generally a manageable transition for both haulers and manufacturers. But often when governments decide to mandate or request organics collection, they leave the details to the service providers. “That puts the burden on the hauler, because a lot of times the financial compensation isn’t there to do it,” Allen says.

Turn Up the Volume

Berg sees the bulk of the organic volume–particularly food waste–and therefore the near-term future focus coming from the commercial side. And this makes sense with the trucks: Haulers can send a front loader out three days a week to pick up the heavy food stops.

With residential, there just isn’t the volume for it to make sense from a truck viewpoint. “Picking up five or six pounds of lettuce trimmings and chicken bones at a house doesn’t make any sense to me,” he says. “If you’re going to run a separate truck for that, are we saving anything? Yeah, we’re saving some landfill stuff but we’re beating up the roads and lots of emissions and everything else to run another truck down the street. Do we go with divided bodies? That can be problematic when you have one side that’s light-fractioned and one side that’s very heavy.”

But as governments set more aggressive goals and mandates to increase organics diversion, the pressures on fleets will increase and evolve. “I think it’s definitely going to grow. The technology, we hope it continues to evolve,” Myers says.  “We’re continually trying to focus on improving our trucks, our transportation strategy, trying to make them more efficient, and have new container types that we’ve developed that aren’t out there in the public domain yet that we’re working on to try and make things more efficient.”

Tufte believes that the biggest challenge going forward is scale. There will need to be enough trucks targeted for organics collection that truck manufacturers will devote more resources to their development. “Over time if this becomes a universally accepted stream to manage, then the numbers will go up, and the technology and the designs will just get better.” 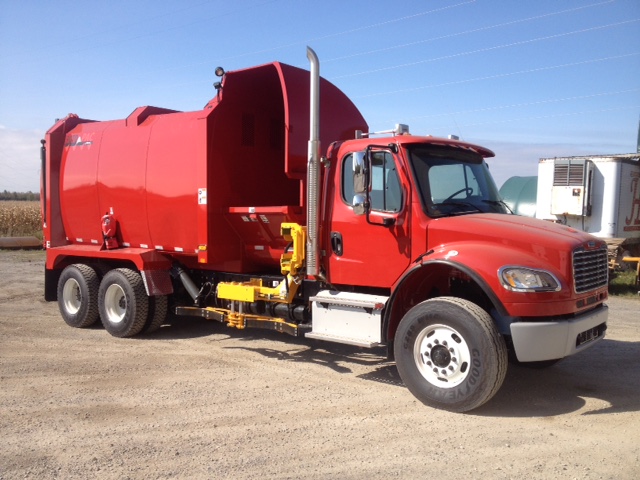 Allen agrees, saying the demand is just not there yet for it to be a priority for truck body makers. “It’s not rapidly changing, but it’s getting more attention,” he says. Still, “It’s kind like the cart before horse. You can do some initial engineering, get some concepts, but are you going to put a body in production that doesn’t have a buyer yet?”

The carts also are part of the equation, Berg says. A 96-gallon cart full of food waste will always be heavy. “How we package what we’re picking up depends on what the equipment is.”

He says haulers may largely continue to use split trucks and do trash one day and organics the next.

“Equipment design really has to depend on the efficacy of it when you get all done. We could build a great unit to do just one thing, but if not everybody is doing just that just one thing, then we end up with no market for it. And it will cost a fortune. Nobody will pay for it, and we’ll stop making it.”