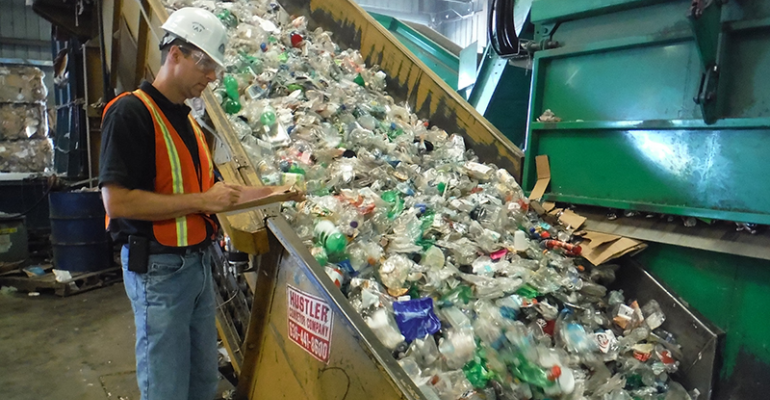 Recycling companies are turning to technology, specifically the cloud and optical sensor software, to help reduce contamination at MRFs.

The recycling industry is one of the few manufacturing industries where the characteristics and composition of the manufacturing feedstock is not closely controlled and may vary significantly from batch to batch. Although recycling processors have done material composition audits on a sporadic basis for many years, the recent recycling market disruption caused by China’s National Sword policy has caused the industry to refocus on reducing contamination and identifying value in the recycling chain. Inbound material audits are becoming more commonplace.

To aid in those audits, companies are turning to technology, specifically the cloud and optical sensor software, to help reduce contamination at materials recovery facilities (MRFs).

Orlando, Fla.-based MSW Consultants saw a need for more efficient information monitoring, so it created WasteInsight, the result of the company’s transition from desktop to cloud-based data management.

WasteInsight is a data and analytics service that touches on local government program benchmarking, waste and recycling market research and material composition analytics.

“Historically, MSW Consultants has been strictly a management consulting firm serving the waste and recycling industry,” says John Culbertson, principal of MSW Consultants. “Over many years of consulting assignments, we gained unique insight about the routinely performed services and research that has the most value for clients. Rather than house this information and data in spreadsheets and reports, placing it in the cloud makes such information more accessible, less expensive and leverages the modern online business model to supplement traditional consulting.”

“Where other consultants and engineers are still using spreadsheets, the GAP System stores, analyzes and visualizes waste and recycling composition data in the cloud,” says Culbertson. “However, we also offer to help design and/or refine any routine composition auditing program to be more cost effective, transparent and standards based, which is why we call it the GAP ‘System.’”

The idea is to improve from once-per-year audits that may or may not capture a representative snapshot of the composition—or in some cases, guesstimates about the exact composition derived from other studies or from outbound shipment reports—so that suppliers and processors anywhere on the recycling chain can establish a routine program to measure composition and contamination.

For MSS Optical Sorters (a division of the CP Group) based in Nashville, Tenn., the company’s sorting systems employ equipment that fractionates, liberates and separates the material stream to recover valuable commodities. Its equipment consists of air separators, disc screens, trommels and other mechanical separation equipment. The company’s line of optical sorting equipment uses advanced sensor technology to automatically detect and separate commodities.

“MSS optical sorters for MRFs employ NIR and Color spectroscopy as well as all-metal sensors to identify the different types of materials in the processed streams, such as OCC [old corrugated containers], newspaper, mixed paper, PET, HPDE, PP, PS, aluminum and other commodities,” says Felix Hottenstein, sales director for MSS Optical Sorters. “The computers are able to track those different types of commodities over time, which provides valuable feedback to the plant operator on whether the sorting system is running at its optimum performance, and if not, where adjustments should be made. For example, if the software finds that there is too high of a percentage of paper on the container line, it will tell the operations supervisor to check the settings of the 2D/3D paper/container disc screens.”

According to Culbertson, this is a transformative time for recovered materials markets and processing. The recycling ton, with its less paper, more corrugated, more plastics and more residue, has evolved faster than MRFs and sorting technologies.

“Moreover, too often there are disconnects between what a MRF customer (say a local government) and the MRF operator believe is in the recycling stream,” he says. “Because we’re independent, the GAP System can level the playing field, bringing clarity and more transparency to contracts and relationships. The GAP System’s data platform also makes some of the tasks associated with managing MRF contracts easier, such as recalibrating recyclable composition percentages and recalculating recyclables values based on market index pricing. Fair or unfair, MRF operators will continue to be expected to figure out how to cost effectively process and move materials.”

The MSS systems allow customers to recover commodities from the waste stream so they can sell those commodities for market value. In the greater scheme of things, separating these recoverable materials from the waste stream leads to less volume of waste going to landfill. In regard to the specific monitoring portion of the sorting system, it allows the operator to find and address problems with the upstream mechanical equipment in real time.

“The identification of the different materials by the NIR, color and metal sensor system is based on statistical probabilities, so the calculated composition will always be only within a certain range of what it actually is,” says Hottenstein. “However, it’s an excellent tool to spot and identify trends of the upstream machine performance and incoming material composition, such as low versus high fiber content on a container line. Calibrating and normalizing the measured composition versus the actual composition can be done to improve the accuracy, but that’s a very time-consuming task."

Culbertson says the market is hesitant to spend money on new services at the current time with such low commodity pricing. The biggest concern he says he hears most often is that there is still a labor cost.

“The more data we can collect and compare, the clearer the picture we can generate about the composition of recyclables,” he says. “There really are no standards now, but the GAP System can bring uniformity to the industry as more and more facilities implement it.”