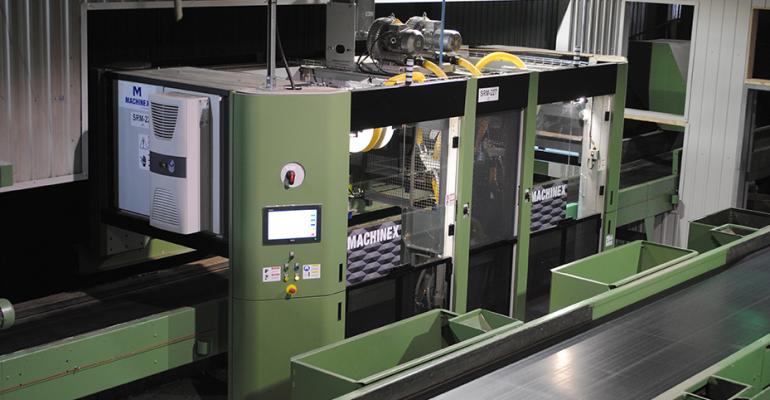 The first Machinex robot was installed in Chicago at Lakeshore Recycling Systems, and the first two SamurAI in Canada have just been installed in Quebec.

Last spring, Machinex introduced its new sorting robot, which has generated a lot of industry interest. Nearly six months after its launch, Machinex noted that the response of the market is “very positive and nine robots have been sold to date.”

The first two SamurAI in Canada have just been installed in Quebec, while six more robots will be installed next year in Canadian sorting centers. Moreover, the company stated it continues to have regular requests from customers who are greatly interested in this technology.

The first Machinex robot was installed last May in Chicago at Lakeshore Recycling Systems (LRS). It's located on the containers line, after an optical sorter ejecting PET and a ferrous magnet. The robot picks three types of products: colored HDPE, natural HDPE and asceptics. Furthermore, the robot offers the flexibility to remove other products such as PET and foil. The SamurAI technology reduces LRS’ reliance on manual labor in its single stream recycling facility, which decreases the operating costs while improving the plant's productivity.

"We are satisfied with this market response since the use of artificial intelligence is still very recent in the industry," said Jonathan Ménard, vice president of sales and strategic positioning at Machinex, in a statement. “Our customers that have decided to install a SamurAI robot have all done their homework analysis, with the objective of guaranteeing a satisfactory return on investment while ensuring a familiarization with the sorting technologies of the future.”

In the last few years, Machinex developed sorting technologies to achieve high recovery and purity rates for recycled materials. The SamurAI is a complementary piece of equipment that naturally converged with this development philosophy, according to the company.

"We pushed its development to obtain a very powerful suction tool that offers, therefore, an excellent rate of success in gripping. The force of the suction lifts the containers while minimizing the movement of the surrounding material on the belt,” said Ghislain Thivierge, specialist in robot cells integration at Machinex, in a statement. “The combination of this phenomenon and a success rate of 60 to 70 manipulations per minute give the equipment very satisfactory results. It must be understood that no matter how artificial intelligence performs, the robot must be able to capture the desired products despite their shapes, weight and so on. Our current experience shows us that the SamurAI performs very well in grabbing the most difficult containers like large HDPE that have irregular shapes. There is no doubt that this is giving us a strong competitive edge."

"Now that our SamurAI robot performs well on sorting containers, the next step is to tackle fiber sorting as it is an important issue for our customers. We also firmly believe that the future of the industry, or that at least the next logical step in optimizing the overall performance of sorting plants, will have to go through big data management. The robot thus becomes one of the tools for collecting, processing and providing feedback for some of this data,” concluded Ménard.

Machinex continues its partnership with AMP Robotics, whose role is to provide the artificial intelligence of the robot, while Machinex provides all the robotic components required and ensures its complete integration into sorting systems.