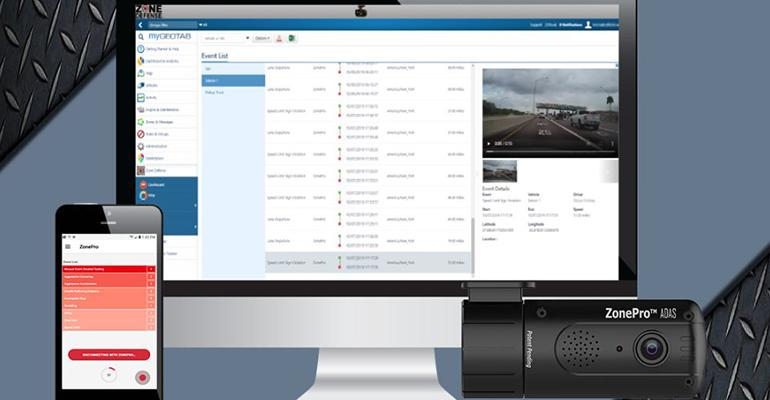 The new ZonePro ADAS camera from Zone Defense LLC is a forward-facing camera that uses AI to watch the road, read road signs and alert drivers of dangerous behaviors.

ZonePro uses actionable voice commands such as “Following too Close,” “Posted Speed Limit 55” and “Lane Drift” to tell the driver exactly what behavior needs to be addressed in real time. In addition, the driver sees their scorecard at the end of each trip so they can see where they have improved.

The ZonePro ADAS system consists of three core components: the forward-facing camera, the app that resides on a mobile device (cell phone/tablet) and the cloud-based server.

“The camera is the eyes of the system. It watches the road, captures event-based video and data and sends it to the app,” says Teresa Prisbrey, senior vice president of operations for Zone Defense. “The app is the brains of the system. It takes the data from the camera and determines when a coachable event occurs. The app then alerts the driver with actionable voice prompts to change their behavior in real time.”

The system is also set up so fleet managers can customize the system to send real-time alerts when specific events occur. The app sends the information to the cloud-based server via Wi-Fi connection, or cellular data if there is no Wi-Fi connection available.

“We utilize artificial intelligence. Unlike other similar systems, our system actually reads road signs instead of counting on GPS or other crowdsourced intelligence for all the information,” says James Markus, president of Zone Defense. “One area where this is important is with speed limit signs. Since ZonePro ADAS has the intelligence to read road signs, drivers are alerted to a change in speed in a construction zone. In contrast, a system using some form of crowdsourcing would not look to real-time speed at that moment in time.”

Fleet managers can access the videos and telemetry data; see the trending activities and improvements to driver behavior; and customize their fleet settings in their secure portal.

“A traditional dashboard camera usually monitors g-force/impact events, alerts with beeps and provides continuous recording for the duration of the driver. These are very valuable tools to help a company determine who was at fault after an accident or event occurred,” says Prisbrey. “In contrast, ZonePro ADAS is watching the road and dangerous driver behaviors (speeding, running stop signs, lane drift, tailgating) and alerts the driver to prevent the accident from occurring at all. The company still receives the event-based recording in the event there is something that needs to be reviewed at a later date.”

This safety data is integrated with both MyGeotab and the Geotab Drive app, enabling Geotab users to access their fleet’s telematics data, driver/fleet behavior trends and event-based videos on a familiar platform.

“With road safety being a top concern for Geotab, it has always been our goal to offer a wide range of advanced solutions through the Geotab Marketplace and its extensive ecosystem of partners that help improve fleet safety,” said Louis De Jong, executive vice president at Geotab, in a statement. “By providing industry-leading camera solutions from partners such as Zone Defense, we are giving our customers access to tools that can help them meet their fleet's safety objectives.”

Markus says that the ZonePro can benefit the waste and recycling industry by helping to improve driver safety; helping to reduce distraction by alerting drivers to what is happening in front of them; giving real-time actionable voice prompts to change drivers' behavior prior to an accident occurring; and allowing fleet managers to reward their drivers as they see the number of occurrences drop.

“These industries provide essential services to our communities, while consistently remaining in the top five of overall injury rate by occupation year-over-year. In addition, the driver shortage and aging workforce results in hiring less experienced drivers just to provide the basic required services,” he says. “Because of these factors, our customers in waste and recycling are usually one of the first to embrace technologies that they believe will reduce the number of fatalities and injuries to their communities.”