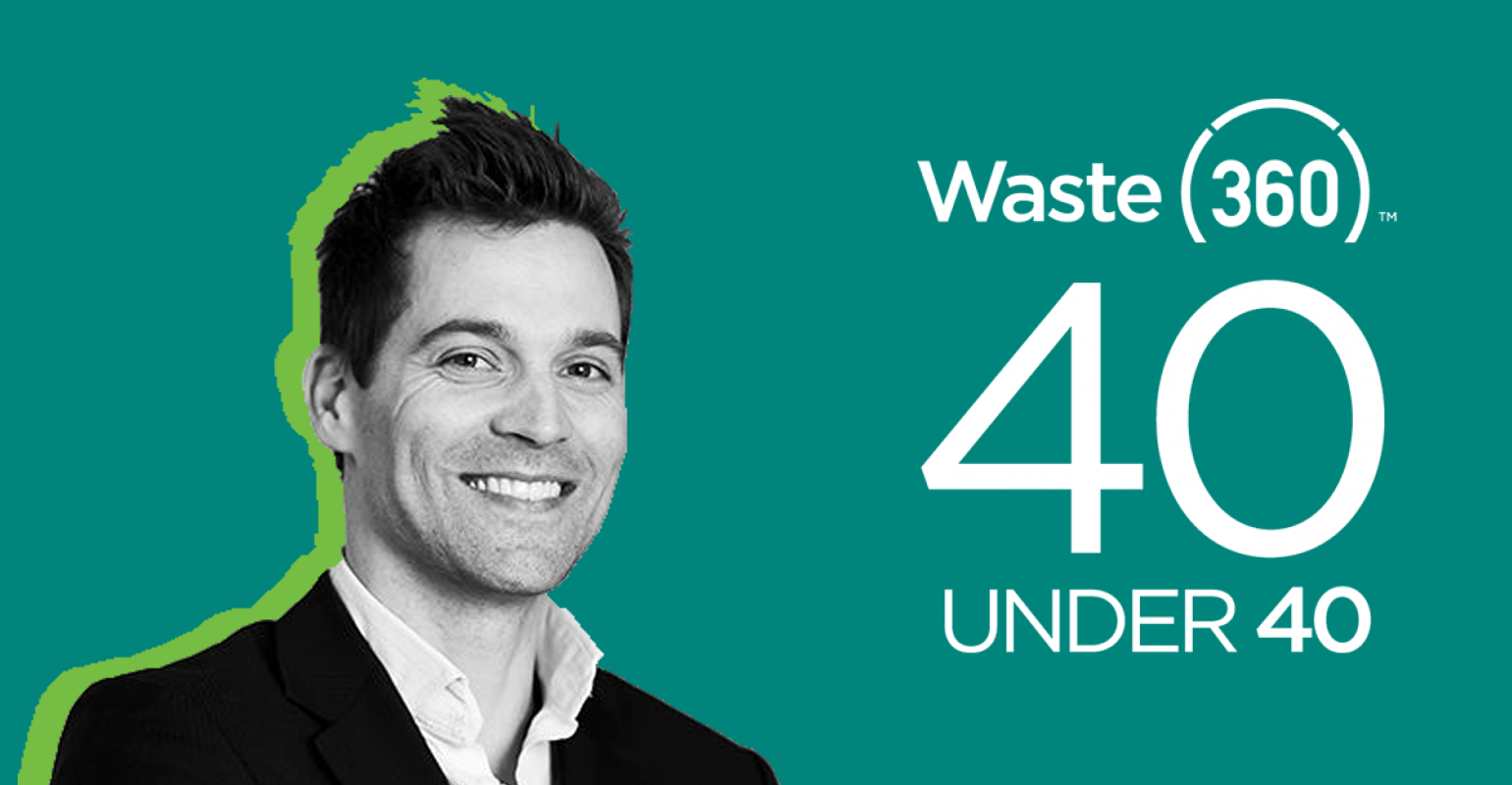 Climate change has been a catalyst for modifying the ways cities operate, and Rubicon's Conor Riffle has seen how technology has assisted with the transition to sustainable practices.

From Ethiopia to cities across the United States, he has explored how cities can reduce waste, fight climate change and rework critical infrastructure with the environment in mind.

The Waste360 40 Under 40 recipient explains the intersection of technology and cities, saying, "Cities are about people, right? They are not about technology - they are about people. And the role of cities is to provide the best quality of life for the people who live and work and do business there on a daily basis. So as technology rolls out, the key thing to remember is ensuring that people can continue to live and work and thrive in cities, and really technology's role is to enable that. And we have to keep that as our guiding star."

Riffle spoke about the role of cities in providing a safe and secure environment for its residents, and where technology comes into play.

Waste360: Tell me a little about your background and your current role.

Conor Riffle: I got to the waste industry through my long career in cities and specifically in working with cities on sustainability. I spent the first decade of my career working directly with some of the largest cities in the world on climate change. And the unique role that these [cities] play in addressing climate change - about 70% of the world's greenhouse gas emissions are emitted in cities. Cities are responsible for two-thirds of global GDP.  So cities are critical to really anything when you're talking about things like economic growth, or whether you're talking about things like environmental issues, like climate change and sustainability - cities are really the key to all of it, and to fixing a lot of issues.

And so I was really lucky to get to work for a couple of different organizations that were focused on cities and city sustainability. The first was The Clinton Foundation. I worked for The Clinton Foundation right out of college and got to with a group of studies known as the C 40, which was a group of the 40 largest cities in the world, committed to greenhouse gas emissions reduction and action on climate change. And then from there,  I was a founding director of a program called the CP Cities program at a nonprofit called the Carbon Disclosure Project (CDP). We built a program to help all the cities in the world disclose their greenhouse gas emissions and other environmental data on a common standard platform. I was able to grow that business from having effectively zero cities reporting to over 500 cities using the technology platform globally to report their environmental data.

That experience and working with so many different cities all over the world helped me to understand the critical role that technology is playing in this transition away from a carbon-based economy into a sustainable economy. And core to that is it was happening on a day-to-day level with cities around the world. And the experience I had at the Clinton Foundation, and then at CDP really brought that home. One was my first visit to a landfill in Addis Ababa, the capital of Ethiopia. That experience really helped to drive home just how unsustainable the landfill model is. And so the combination of that with my interest in cities, my experience with landfills and my increasing role in urban sustainability is really what drew me to Rubicon and led me to take the role that I'm in now as the VP of Smart Cities.

Waste360: What challenges have you seen with introducing and implementing new technology, and then, in turn, gathering the data that's needed to make these changes to create a more sustainable society?

Riffle: I'm impressed by the changes that cities have been making over the last ten years, and I've really gotten to see it up close, which has been a real honor. So when I first started working on climate change, and on urban sustainability in 2006 at the time, very few cities had really done much on climate change. When I was speaking to them back then, it was really the first opportunity that they'd heard about the importance of climate change, and the importance of, making a transition to a more sustainable model. Fast forward 15 years, and we have so many examples of cities that have made these incredible transitions, to wean themselves off greenhouse gas emissions, to transition, really every sector of their economy from the way that they use energy, the way that they power buildings, the way that they move people around the cities, the way that they design streets, even the policies they make about things like driving, or what types of vehicles can go in the city, down to the way that they manage waste - all of those have undergone a real transition over the last 15 years.

And cities now are on a much more sustainable growth path than they were 15 years ago. And technology is really enabling a lot of that. For example, just to give you a non-waste example, the Congestion Charge zone in London and Stockholm is basically a zone that the city has drawn around the city center. In order to drive into that zone, you  need to pay more. And that model where cars are charged to drive into the center of the city is actually enabled by technology that reads the license plates. And that can compute whether or not that vehicle has paid its toll to be able to drive in the middle of the city and reduce pollution. In London, and in Stockholm and other studies where it's been implemented significantly over the last 15 years or so, these zones have added years and years of life to the people who live in the Congestion zone and who work there every day.

So we're seeing technology enable these sustainable transitions in the waste space. A really interesting area of technology is on some of the work that we do with cities to help them improve the efficiency of their routes. Think about just how intensive it is to pick up the garbage in a residential waste context. The government has to buy a waste vehicle, and they have to put crew on it, and then they have to send it around to every single person's house in the city once a week. It's very, very time intensive. It costs a lot of money and there's a lot of greenhouse gas emissions and other pollutants associated with the trucks as they go and do that collection. Using some cutting edge technology, we're actually able to optimize those routes. When the city is doing that, they can pick up the garbage and they can run those routes with the least impact on the city as they do it. So those are a couple of examples of how technology is really changing the city. And I'm really excited about the future of how technology can continue to enable these changes.

Waste360: How have you seen technology be the catalyst for change?

Riffle: I would say the biggest change has been in data. A lot of decisions 15 years ago made by cities weren't necessarily made with data because that data wasn't available. But now, the smartest cities are measuring everything that happens in their city so that they can use that data to make really informed decisions about how to make these transitions. It could be everything from technology that counts traffic on the street, to air pollution monitors, to measuring the type or weight of the waste that their residents produce and that their vehicles collect so that they can collect it in the most efficient way possible. and then they can maximize the amount that they recycle. Those are all examples of ways that all of a sudden having all this data, and being able to actually collect this data, can make it much easier for cities to make these transitions and really build the case, for cities to make these sustainable transitions.

Waste360: What does it take to continually be innovative with trying to solve these types of issues to combat climate change and create more sustainability within a city?

Riffle: I think that it really takes a will to make these transitions. Some of these transitions are hard. They involve a new way of doing things. And sometimes, especially in a city context, you can get residents who complain or who don't want to make that transition because it's changing the things that they're used to in the city. But at the end of the day, cities and city leaders are responsible for delivering the highest possible quality of life,  the safety of the residents and the security of the residents. And cities can't have safe, secure cities in a world where the climate is changing rapidly.

If you're a city right now, and you're not thinking about resiliency after we've seen the wildfires in California or we've seen the impact of COVID on city services, then you're really missing what the future is going to be about. Our cities are now responsible for ensuring that we can continue to live and do business productively in a world of a changing climate. And it's not a job that they asked for, but it's one that they have now. And so that is a big motivator for cities to make this transition.

Waste360: Where do you see technology playing a role in the next five to 10 years in the waste industry and with climate change?

Riffle: I'm really excited about the next five to ten years because data and technology can continue this revolution that we're in the middle of, that's happening in cities, to help us get a better understanding of how to make this sustainable transition. Data and technology have already transformed cities, and they will continue to transform cities over the next five to 10 to 20 to 50 years. We're not getting away from data. We're not getting away from software. We're not getting away from technology. This is the future. And it provides so many opportunities for cities to improve the quality of life and the quality of the services that they deliver. In the case of waste, it's about how can a city government use data and technology to run its solid waste operation more efficiently? How can it ensure that it can reduce recycling contamination? How can it ensure that it can afford to collect organics from its residents? Data and technology is going to enable all of those great advances in the future, and they're going to continue to roll out and take over all the cities across the U.S. and the world.

If you look at some of the big issues we're facing in the waste industry, right now - recycling markets are down and recycling contamination is up. These are issues that can be improved, and can, in many cases, be solved with the correct application of technology. So technology alone is not enough, as it requires much more - people, institutions and the right framework to actually solve these problems. But technology is going to continue to be a key enabler of the solutions to all of these types of problems. And I'm just really excited to see this smart city transition continue to fix it.