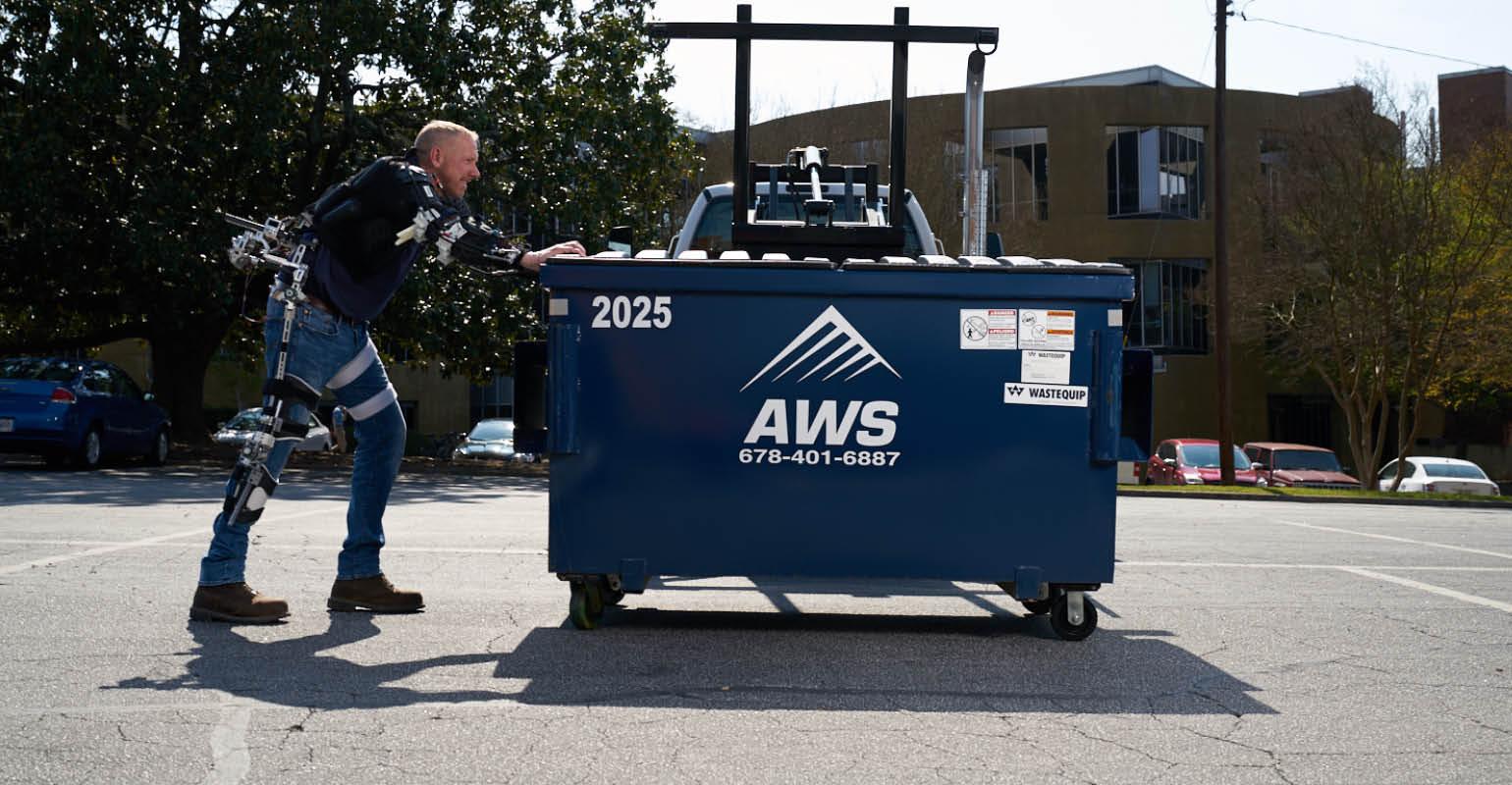 The exoskeleton aims to improve safety, efficiency and workers’ capabilities to make their job easier and less strenuous.

According to the National Center for Biotechnology Information, a research sector of the National Institutes of Health, waste collection is one of the most hazardous jobs. Waste “slingers” are subjected to increased muscle and joint injuries because of the laborious nature of the job—jumping from the truck, grabbing and dumping cans and disposing of waste over and over again on a daily basis.

Because pushing, dragging and lifting thousands of bins and bags in a given day is extremely taxing, Atlanta-based Rubicon Global has partnered with Georgia Tech to utilize technology to give waste slingers some relief.

“We are looking to design wearable, assistive technology in the form of an exoskeleton that will aid slingers in their physically demanding job,” says Dr. Aaron Young, assistant professor of Automation / Mechatronics at Georgia Tech. “The idea of the exoskeleton is to improve safety, efficiency and workers’ capabilities to make their job easier and less strenuous.”

Rubicon and Georgia Tech have had a long affiliation, so the partnership is a natural fit.

“Georgia Tech is a premier research and technical institute, and we feel very fortunate that they also happen to be in our backyard,” says Phil Rodoni, chief technology officer for Rubicon Global. “We’ve enjoyed collaborating with them on a number of projects.” 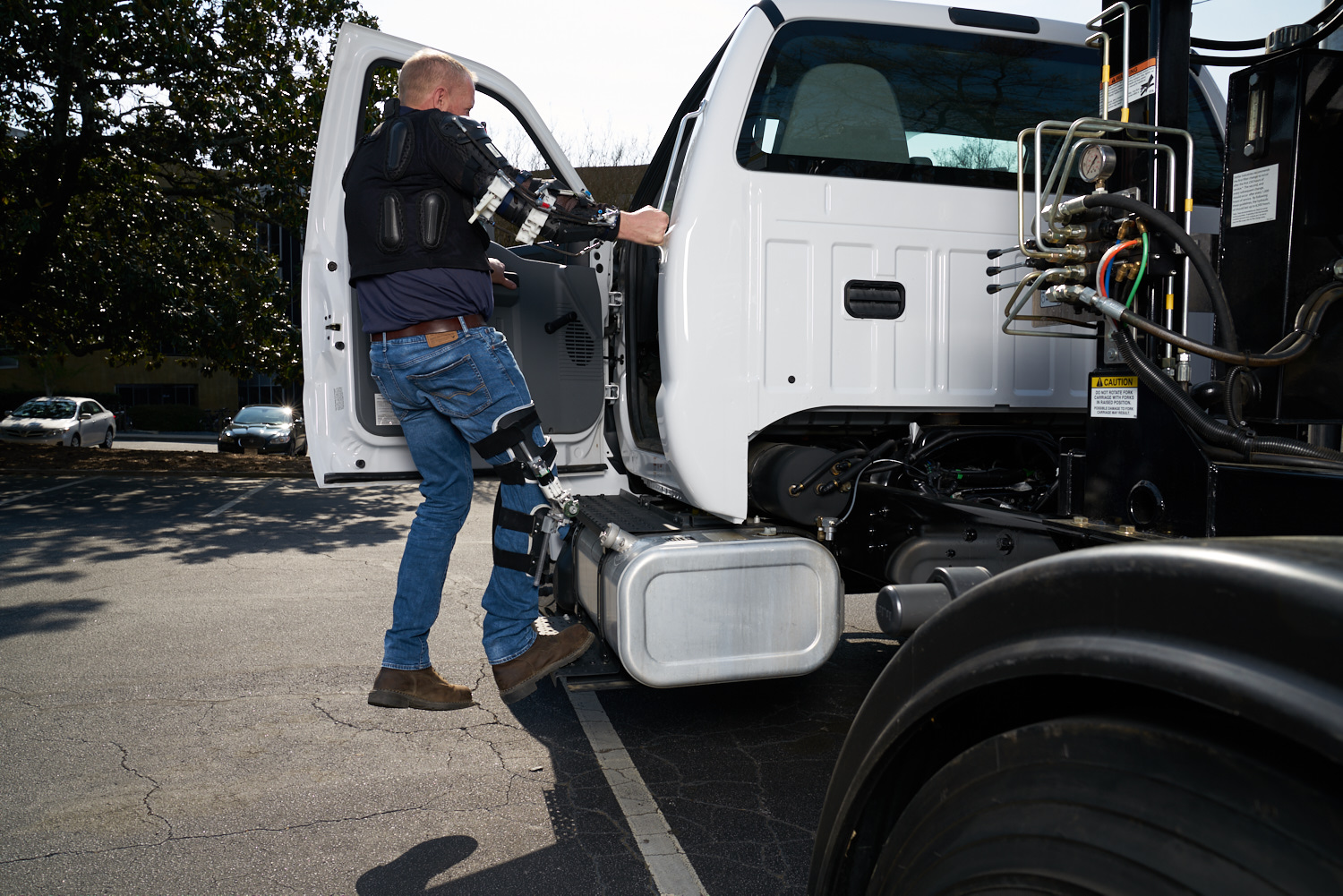 Georgia Tech’s Institute of Robotics and Intelligent Machines (IRIM) is partnering with Rubicon to specifically focus on the science and engineering aspects of this project. Dr. Young’s EPIC (Exoskeleton and Prosthetic Intelligent Controls) lab will perform the initial biomechanical assessment.

Jun Ueda, a supporting PI at Georgia Tech who runs the Biorobotics and Human Modeling Lab, will perform a musculoskeletal analysis of the data to help better assess internal dynamics of the workers during their working tasks.

“Once we perform this assessment, the engineering groups at Georgia Tech plan to put together a novel wearable exoskeleton design to help augment the function of these workers and help them in their daily jobs,” says Dr. Young.

To launch this project, Georgia Tech is conducting a study to find data relative to the movement and strain of the slingers with the objective of finding ways to make the process safer and more efficient, says Rodoni.

“We are performing an initial research study to investigate the biomechanics of slingers during their daily activities,” says Dr. Young. “We will bring in Atlanta trash workers and formally study their biomechanics by replicating the actions they perform in the field.”

Georgia Tech will use motion capture technology, similar to what is seen in animation studios, to look at movement characteristics to assess what the workers’ muscles are doing through electromyography (EMG), a common technique to measure electrical energy in muscles used in many hospitals today.

In-depth biomechanics, including motion capture and EMG, have never been studies for slingers in the past, and this scientific assessment is needed to understand how to engineer the most effective assistive technology, according to Dr. Young. 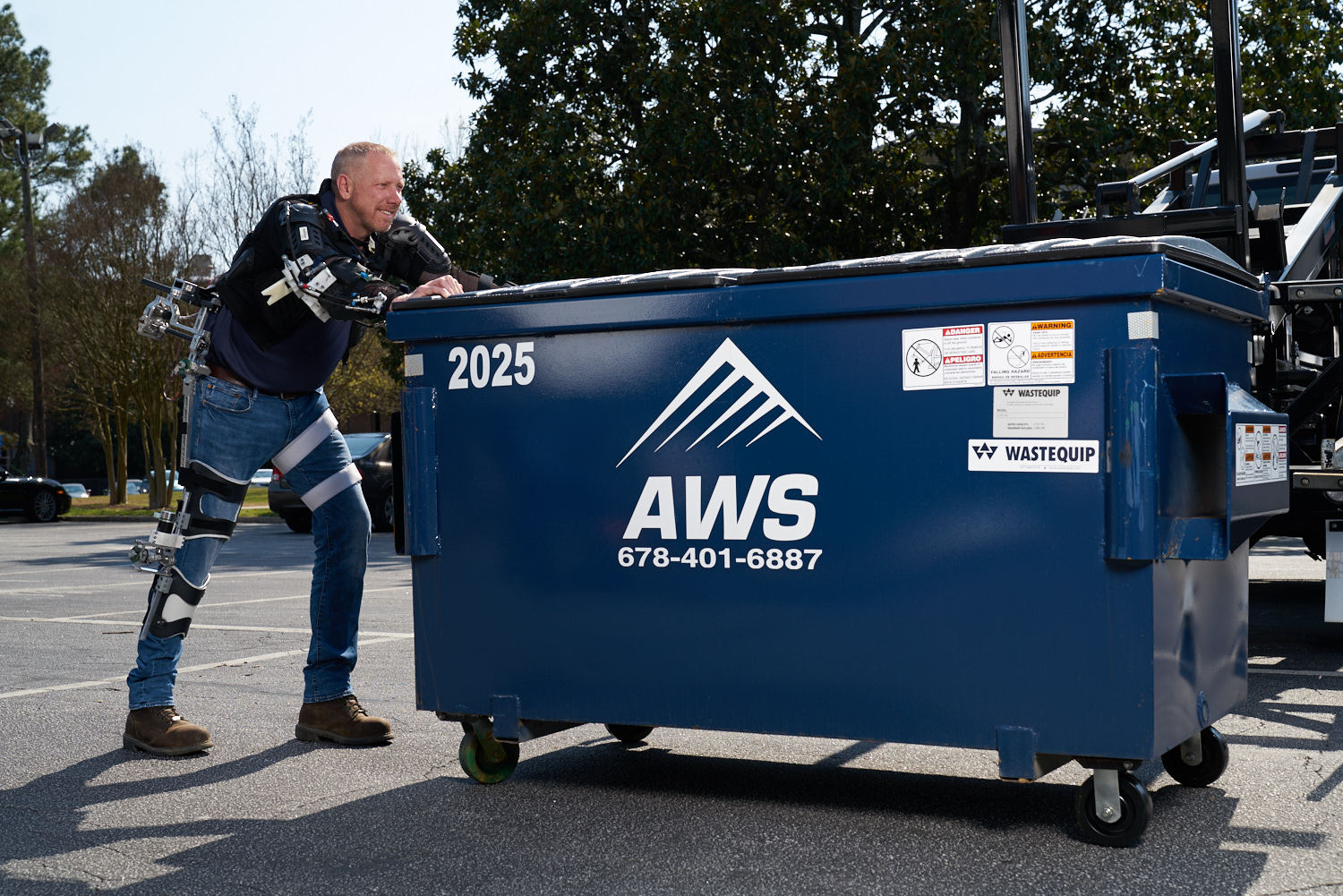 “We use artificial intelligence through machine learning techniques to allow an onboard computer to understand the intent of a human operator,” says Dr. Young. “This allows a wearable robot to act in sync with the human’s own muscles and provide assistive actions. We also have novel custom interface technology for wearable robotics made possible through the Prosthetics and Orthotics program at Georgia Tech.”

Georgia Tech’s labs partner closely with the clinical training program, and orthotists typically are involved in these projects to improve the comfort and fit of wearable exoskeleton technology. The institute also has a state-of-the-art human biomechanics lab to formally assess and refine robotic exoskeleton technology.

The study should be completed by the end of this year, according to Dr. Young, but it is too difficult to predict when the first prototype will be available.

“This is too difficult to predict at this time as there are many factors that affect this,” he says. “We are performing the initial biomechanics study of the slingers to understand how to most effectively intervene with wearable robotic technology. Until we have a better grasp of the specific solution, we can’t accurately predict timelines as the scope and difficulty of the future prototype is unknown until the initial assessment is complete.”