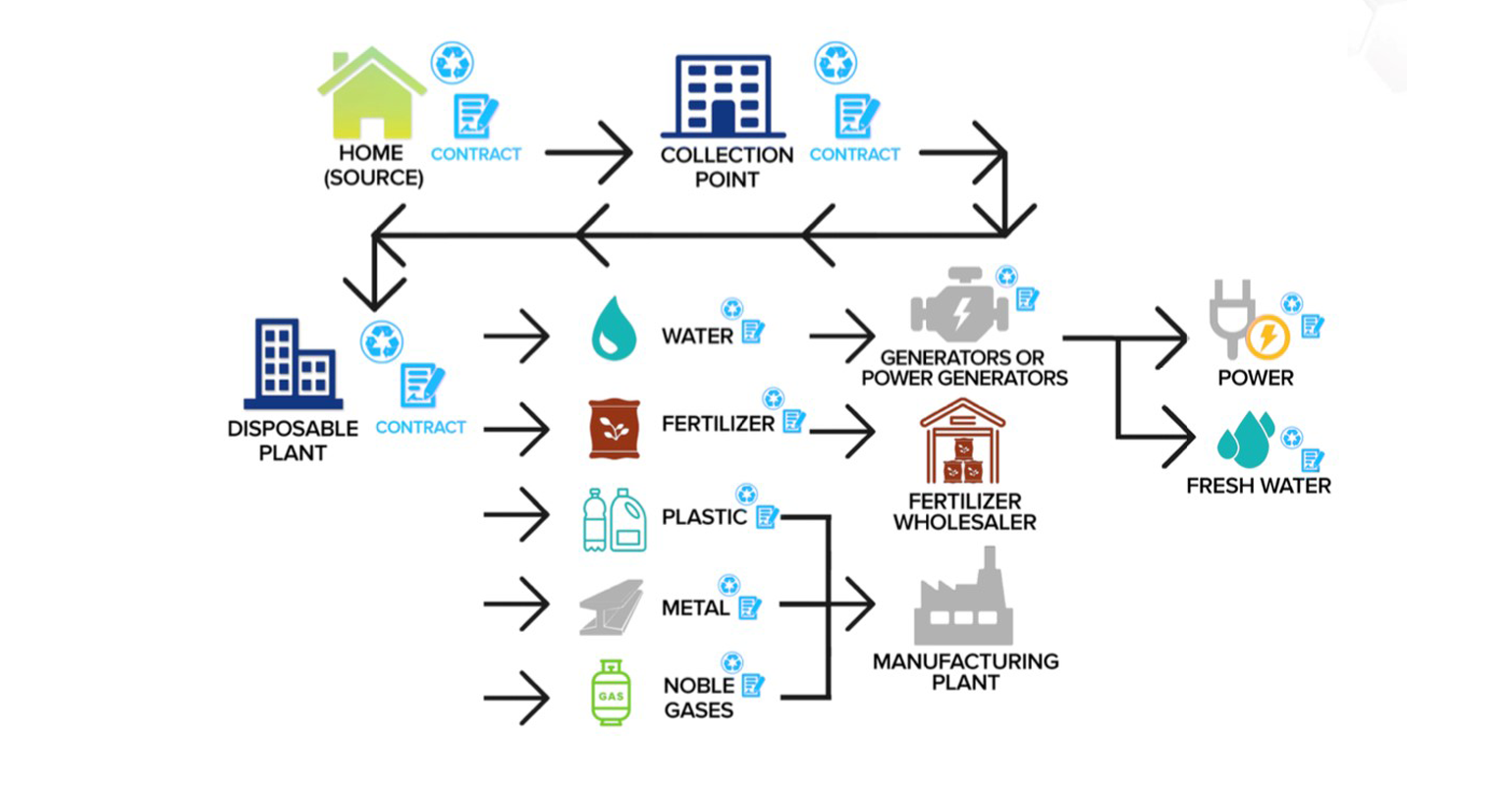 Software tech developer R&D Crypto Group is partnering with green energy producer CETS Technologies to pilot a blockchain system to track waste as it moves from the curb all the way to its last stop, whether landfill, energy conversion plant, or other.

Blockchain is an electronic, decentralized ledger of multiple, compiling records (called blocks) that are linked and stored in a database.

Russ Lema, cofounder of R&D Crypto Group, creators of Invizion, which is the blockchain technology project, calls out two core features and benefits of the company’s technology: Data can’t be modified because the records are encrypted. And the tracking system’s automated process can’t be interrupted, even if one location or group of machines has technical glitches.

The ability to prevent modification of chain of custody data, as well as to mitigate human error are perhaps its strongest attributes, says Lema.

“Today a lot of waste tracking systems are done manually or semi-manually with logs, so there is a lot of human interaction, and humans make mistakes. Systems like Invizion can guarantee accuracy, while providing data security and facilitating transparency.”

As such he says, it can support waste professionals with audit, compliance, and accountability.

“The data is verifiable and can be used to provide information to government agencies, showing how much waste was processed and how it moves from one location to another. It can track renewable byproducts and it can validate carbon credits and CO2 emission offsets,” says Lema.

He and Cofounder Daryl Taylor intend to sell it for other practical applications, namely to increase operational efficiencies, as the system can be used to analyze the data, for instance to help determine which locations generate far more trash than others in order to facilitate rerouting.

Key components of the technology, which will be showcased at a United Nations Leader Summit slated for June 2021, are a digital “token,” a “smart contract,” and an IoT network of connected sensors.

Tokens are created for each entity along the chain of custody, which identify that entity and provide a visual representation of material as it moves in real time. From there a separate smart contract is set up at each link along the custody chain (hauler, transfer station, etc), which contains data collected from the sensors, which could for instance be a weight sensor or chemical compound sensor connected to a trash truck or other equipment.

An actual transaction tracking the waste processing lifecycle may look like this:

A smart contract and token are created at the generator’s location; another contract is created when the hauler moves the waste to the truck; and the token is transferred from the generator’s location to the truck, with data measured there such as material and weight. Then the token moves to the processing plant where another contract is created, and from there separate contracts are created to document output from each material type (recycled plastic, recycled metal, fertilizer, gases captured for reuse, etc).

Athens, GA-based CETS, who co-owns the Invizion technology, is hosting the first proof-of-concept project, which will be folded into CET’s own pilot, where it is converting waste to energy for Lane, S.C.

It will test Invizion, tracking the process beginning at the curb, on to the waste transfer station and the gasification plant located there, where multiple waste streams are converted to renewable energy.

“So, we will track the whole waste management process,” says Vincent I. White, CETS Technologies CEO.

He goes on to say, “Everyone is talking about zero waste, but no one has a scalable, systematic approach to make that happen. We can make the system more efficient and cost effective and hold people accountable as we track waste.”

Invizion and CETS were introduced by a mutual friend through business.

“We had already decided to design a waste tracking system for waste reduction using blockchain, and CETS needed a system for their compliance purposes to track where waste started to the end of the process,” says Lema. “We talked and we realized our app was a perfect model for their closed loop system.”

Invizion has since moved from the conceptual design phase and is working on the pilot to test at small scale, with hopeful plans to expand to commercial scale after proving it out at CET’s operation.

The plan for next year’s United Nation’s Leadership Summit is to demonstrate the whole waste-tracking process through a virtual walkthrough. Lema and White are gearing up to be able to show attendees a scaled-down version of the gasification process, live.

“Inside the gasification process is where sensors sit, so we can show the measurement of what goes in and what comes out. This model will show how you track the waste process from collection to the output of the product, and how you view that captured information,” says Lema.

White believes the technology could potentially support a big paradigm shift, commenting that some states are only reporting on about 30 to 40% of their municipal solid waste and he wants to see all of it tracked.

“Not only should waste be tracked by municipalities responsible for their citizens’ trash, but industrial and food waste and other streams that are not fully documented, quantified, or audited.

I think this will be a catalyst for transition from a linear to a circular economy. So, waste will no longer be stockpiled but rather transformed. Tracking that process or lifecycle will help to accomplish this,” says White.