Drones Increasingly Finding a Place in the Solid Waste Industry 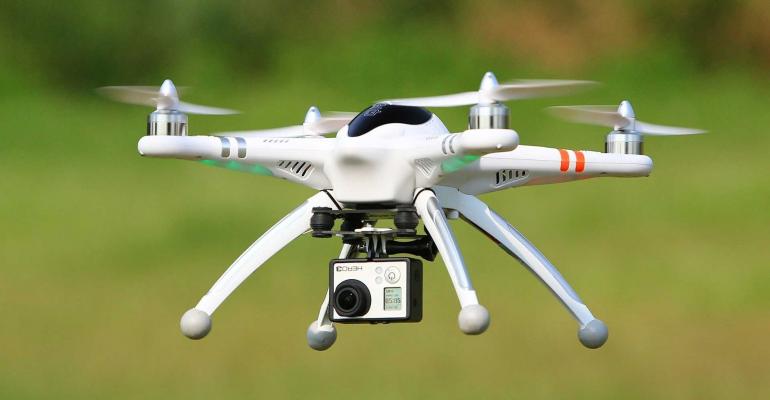 Broad adoption in the waste and recycling industry is just beginning.

Solid waste firms are continuing to find applications for unmanned drones within the industry.

But that’s only the beginning of what these tools might be able to do for the industry.

“It is anticipated that drones will be equipped with GPS devices, thermal imaging cameras and sensors to monitor sites which could save on expensive monitoring currently done on foot over rough terrain,” says to Anne Germain, director of waste and recycling technology for the National Waste & Recycling Association (NWRA) based in Washington, D.C.

David Biderman, executive director of the Solid Waste Association of North America (SWANA) based in Silver Spring, Md., says drones are used at an increasing number of waste disposal facilities and provide real-time imagery of what is happening at a site.

“They help landfill operators maximize airspace, assess slope stability and monitor their facility’s operations for erosion, standing liquids and hot spots,” Biderman says. “They are also used to assess cap integrity and are particularly useful for performing damage assessments after major weather events. A number of consulting firms are utilizing drone technology to supplement their services and add value for landfill customers.”

Broad adoption in the waste and recycling industry is just beginning. Much value and benefit from drones remains to be realized from the currently available technologies, according to Michael Singer, CEO, DroneView Technologies, based in Bloomfield Hills, Mich.

Additionally, drone mapping can often provide landfill managers with a comprehensive overview of their sites faster than a ground inspection.

“By surveying from the air, drones can provide more efficient, cheaper, and accurate topographical and volume data about a disposal facility,” says Biderman. “Importantly, the use of a drone reduces the risks to personnel who would otherwise be required to cross uneven terrain.”

According to Singer, the mapping and surface modeling data is being used to enhance landfill design and improve operational efficiency.

But, as with all new technologies, drones face challenges in the waste and recycling industry.

“Drones also create concerns about privacy, safety and security. And, the rules are not settled as to whether drones can be flown over private property without permission of the landowner,” says Germain.

Singer cites education, acceptance of accuracy and benefits, and the natural corporate aversion to changing behavior that exists when bringing new technology or process into a large company as the most difficult hurdles for drone technology, says Singer.

Biderman agrees and adds that cost can be a factor although it has been decreasing.

“As the cost of the technology decreases, I think we will see an expansion in the use of drones in the waste industry,” says Biderman. “Some possible uses include radiation detection and air quality testing at disposal facilities.”

Singer says he expects to see significant adoption of drone technologies in the landfill industry over the next several years.

“Most landfills develop an annual topographic map using traditional piloted aerial photogrammetry,” he says. “For many sites, the same output can be created using drones to capture the images, yielding improved accuracy, quicker access to data, enhanced safety and reduced costs. Furthermore, as we have already begun to see, landfill operators are seeing the operational benefits and are collecting this data with greater frequency, either monthly or quarterly.”