Autonomous Vehicles: The Next Big Trend in the Waste, Recycling Industry? 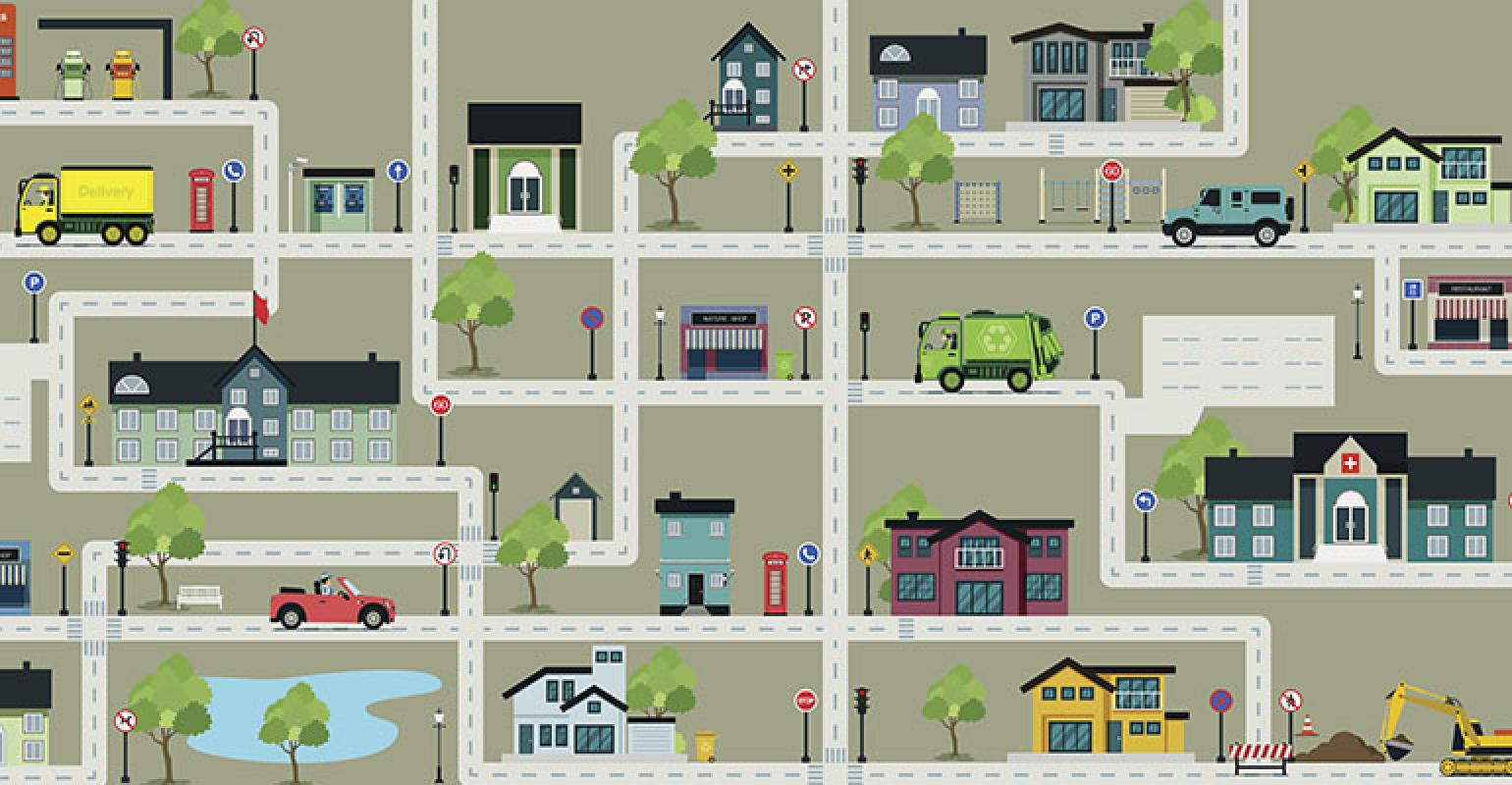 The National Waste & Recycling Association’s Safety Committee toured the American Center for Mobility to learn about the latest technologies for autonomous vehicles and what they may mean for the waste industry.

Autonomous vehicles were once something you’d see in a sci-fi or action film, but now, they are actually being developed and tested around the globe. Companies like Tesla, Volvo and Mack Trucks have used their knowledge of vehicles and technology to create prototypes that are currently being tested in different environments. And while these advancements are mainly in personal and long-haul vehicles, autonomous waste and recycling collection trucks are slowly making their debut.

To better understand the latest technologies for autonomous vehicles and what they may mean for the waste industry, the National Waste & Recycling Association’s (NWRA) Safety Committee recently toured the American Center for Mobility (ACM). Located in Ypsilanti, Mich., ACM is a purpose-built facility focused on testing, validation and self-certification of connected and automated vehicles and other mobility technologies. 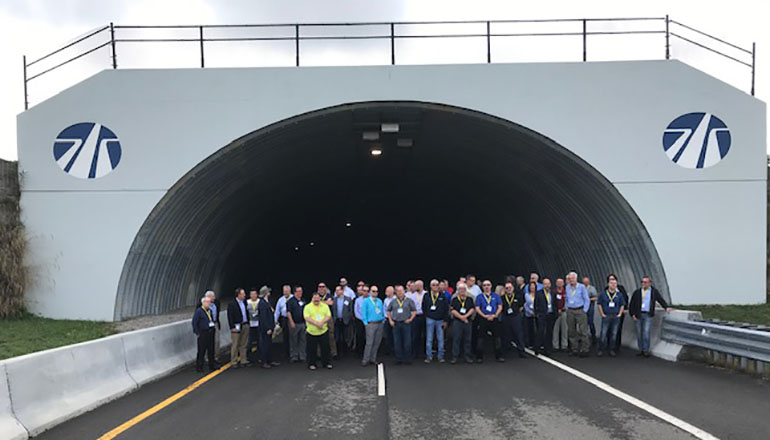 “Our mission is to support industry. We’re an enabling facility, which means we provide the infrastructure and support services to industry as they develop and advance technologies they’re working on,” says Mark Chaput, chief operating officer for the American Center for Mobility.

These test environments aim to provide every feasible driving environment that exists in the real world and to achieve full system validation, which gives companies testing their technologies confirmation that the technologies can function properly in each environment, both independently and during the transitions in between each of those environments. 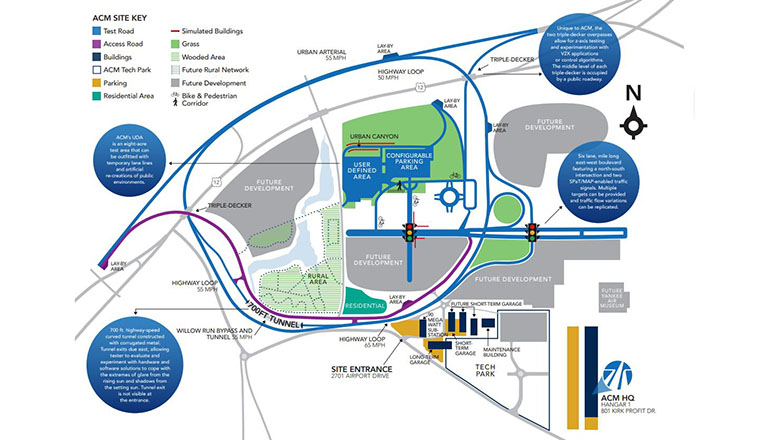 “It’s important to note that it’s not just about the roadway infrastructure and the Intelligent Transportation Systems (ITS) infrastructure that we’re building; it’s also about all the activities that happen on the road, in traffic, in residential settings, etc.,” states Chaput. “We’re able to incorporate those activities into the testing environments so these companies and their technologies can better understand what all they need to be prepared for to navigate safely.”

At ACM the typical customer is a company testing commercial or passenger vehicles that are demonstrating what ACM calls Advanced Driver Assistance Systems, which include technologies like cameras, lane-keeping sensors and collision avoidance sensors that are added to vehicles to guide a human driver in safer operation of the vehicle.

As these vehicles shift to eliminate the human driver as the operator, it’s important to test and evaluate how computer systems can replicate humans and their decision-making capabilities to effectively and safely operate a vehicle with more environmental awareness than humans can accomplish by themselves.

“Consider a traditional garbage truck going through a residential neighborhood and what it would have to go through if it were in an autonomous mode,” says Chaput. “It would have to understand roadway widths, be able to navigate the hardscape (gutter pans, curb lines, pedestrian crossings, etc.) and be able to physically go down the roadway and detect the presence of the garbage receptacle and align the truck to perform its collection activity. All of those things need to be programmed in, and you have to ensure you have the right amount of technology to safely make it down the roadway and to complete collections. There’s a lot of complexity in that because there are a lot of other factors than just the driving component.”

Some infrastructure companies are beginning to deploy ITS technologies like road cameras that help monitor systems and data collection devices that collect information on things like traffic, volume and speed. This data helps these companies better understand what’s happening on roadways, so they can share that information through vehicle-to-infrastructure communications. 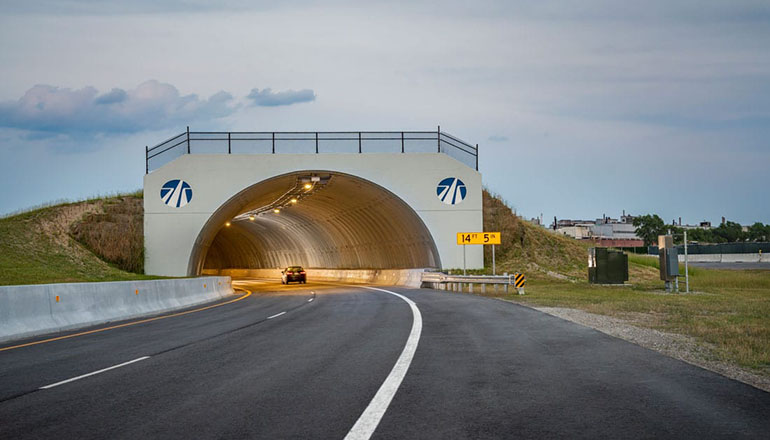 For example, if two vehicles were approaching an intersection from different directions, the infrastructure could sense that one of the vehicles is travelling at a fast speed and about to run a red light. That infrastructure could then message to the other vehicle with the green light that if it moves forward, it could potentially crash with the vehicle running the red light.

“The ability to share information on what other vehicles are doing is really the ultimate safety benefit when talking about intersection interactions,” states Chaput. “The other component that’s prominent is monitoring weather and how it affects the drivability of systems. All of this information could then be messaged to either a human driver in current day or to an automated vehicle’s data set in the future to help the vehicle operate more safely.”

Some autonomous waste vehicles such as Volvo’s and Renova’s autonomous refuse truck are being tested in urban environments. And some vehicles like Komatsu America Corp.’s semi-autonomous construction-class dozers and excavators are being utilized at landfills and materials recovery facilities.

ACM hasn’t had an autonomous waste vehicle tested at its facility yet, but it is working on a research project with a consortium of companies from the U.S. and Germany on an automated street sweeper. The street sweeper is equipped with technology to allow the vehicle to operate in its full capacity without a human being the actual operator and controller of the vehicle, according to Chaput. Instead, a human would serve more as a backup than a default to manually take over if the system fails or something isn’t functioning properly.

“It’s important for us to be part of the conversation and understand what goes into the testing because the safest place for our drivers to be is in the cab,” says Kirk Sander, vice president of safety and standards at NWRA. “As we look at how autonomous vehicles can be used in our industry, it’s also important for us to pay attention to the travelling public and what those smart vehicles could mean for our workers who are also out on the roadways.”

One of the newest trends in the world of passenger autonomous vehicles is personal taxis, which look like an extremely large drone and could transport one or two individuals in a taxi-type format from one location to other. Some companies are starting to do investigations and product development on those types of vehicles, and although there’s a perceived commercial market, there’s no commercial market that currently addresses that trend, Chaput points out.

“There’s a big advantage in automating parts of our business process, but we need to be part of the conversation to ensure that regulations around these technologies and vehicles aren’t set in a way that hurt us,” says Sander. “Knowing that these vehicles are entering our industry, I think these advancements need to be tied into ANSI [American National Standards Institute] standards to ensure our industry is equipped for that change.”

As the industry prepares to develop and potentially roll out autonomous vehicles and other smart technologies like drones, Chaput welcomes industry companies and leaders to test their products at ACM.

“ACM is open for business, and if there’s any interest in the waste industry to further understand how these technologies may affect them today, tomorrow or down the road, we’re willing to work with them and provide them with a facility to perform research, testing, evaluations, product development, etc., of some of the technologies they are considering,” he says.