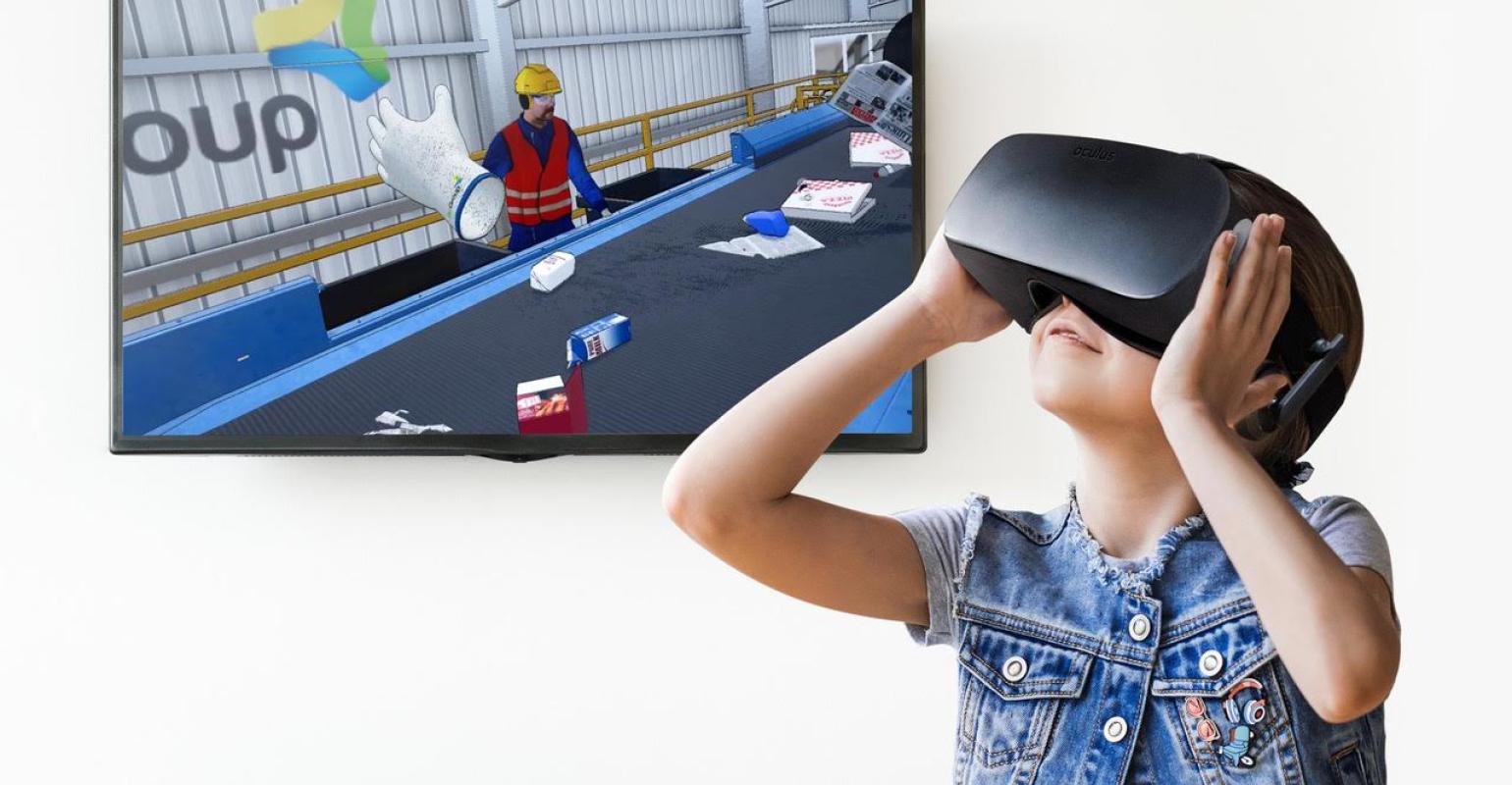 The VR experience aims to educate entire classrooms of school children about the recycling process of turning trash into reusable materials.

The Recycling Discovery Hub is the central space used to deliver the ACT NoWaste education program on recycling, waste minimization and reuse and disposal services. During 2017-18, ACT NoWaste in partnership with Re.Group, the MRF operator, upgraded the education space to deliver a “showcase” recycling education facility that allows visitors to explore resource management, sustainability and recycling innovation in the ACT.

One of the features of the facility is a virtual reality (VR) experience for groups to explore the MRF machinery and experience sorting, identifying and baling materials for sale.

“It also incorporates hands-on displays for visitors to discover the science of sorting recyclables, a recycling innovation display and the room itself is made of recycled and repurposed materials—carpet made from recycled plastic, a bench top made of glass from the MRF and much more,” says Robbie Ladbrook, education team leader for ACT NoWaste Transport Canberra and City Services Directorate.

The VR experience is approximately 9 to 12 minutes and is an immersive experience, with three separate tasks at hotspots with gamification.

David Singh, CEO of Re.Group, says the aim is to educate entire classrooms of school children about the recycling process of turning trash into reusable materials. “The engagement of virtual reality has helped turn our Recycling Discover Hub into a truly interactive experience that puts recycling in the hands of our customers,” he says. “Re.Group and the ACT government also recognized that VR has yet to play a large part in the recycling industry. By using VR technology, they were able to create a window into their world that the public could interact with on a personal level. VR has enabled Re.Group to reach out to kids and engage them in an innovative, new way that hasn't been possible so far.”

The VR experience is a collaborative project between Protein One and Rotor Studios. Protein One was the brand agency that conceptually designed the piece. The software development was undertaken by Rotor Studios.

According to Galvin Scott Davis, creative director for Protein One, based in Pyrmont, Australia, Protein One is the brand agency for Re.Group, which created the concept for the VR experience, strategy for solving business objectives, wrote the gamification scenarios and designed the UI graphics.

“Rotor developed the experience, creating all of the 3D assets and developing the VR interactivity all the way through to deployment and installation onsite,” says Philip Jucker, senior project manager for Rotor Studios in North Sydney, Australia. “Rotor carefully selected the hardware and software that powers the experience, tested the experience with school-age children and performed thorough quality assurance checks on the final product.”

Using a VR headset and controller, the user is transported into a virtual representation of the Re.Group Recycling Facility, complete with one-to-one recreations of the recycling machinery in use at the ACT Facility. Once inside, the user can engage in several mini-games that teach them about the recycling processes at the plant, allowing them to pick up and sort trash into the relevant receptacles while being guided by a voiceover. “The participant uses the Occulus Rift headset and touch sensors while standing in a defined ‘play space’ to undertake the various tasks before progressing to the next section,” says Ladbrook. “The other visitors are paired with the experience through watching on the large screen TV to help direct the participant.”

To use with the Oculus Rift headset, the Unreal Engine is the real-time renderer that provides all of the visuals and interactivity for the experience.

“Rotor Studios carefully calibrated the engine, software, hardware and visuals to ensure the final experience would be both smooth and responsive,” says Jucker.

Ladbrook says that the idea for a VR experience came about through the successful partnership of Re.Group and ACT NoWaste.

“Having visitors ‘experience’ a visit to the facility in a safe way was the fundamental driver to incorporating virtual reality,” he says. “Being able to illuminate complex processes that were not visible through the CCTV or window also defined the elements of the sorting story that we focused on as the hotspots.”

Re.Group proposed Protein One as the development company due to its experience in working with Toyota and other industries using VR to provide access in a unique way. Re.Group has used Protein One before for similar projects, and the concept has potential application for use in its other facilities.

Protein One developed the idea of allowing Re.Group’s visiting public to enter the VR world by being transported inside the Hume facility and actively operate machines that otherwise would be unattainable.

Protein brought Rotor Studios to the project as its expertise in innovative VR and 3D experiences was already well known within the industry. Together, Re.Group on behalf of the ACT government, Protein One and Rotor Studios developed the concept to a fully functional VR experience, according to Davis.

“Protein One and Rotor Studios have a longstanding relationship, working together on innovative brand ideas that utilize their expertise in creative thinking and technology application,” he says. “This is just one of the projects that demonstrates their ability to partner on world-first digital experiences.”