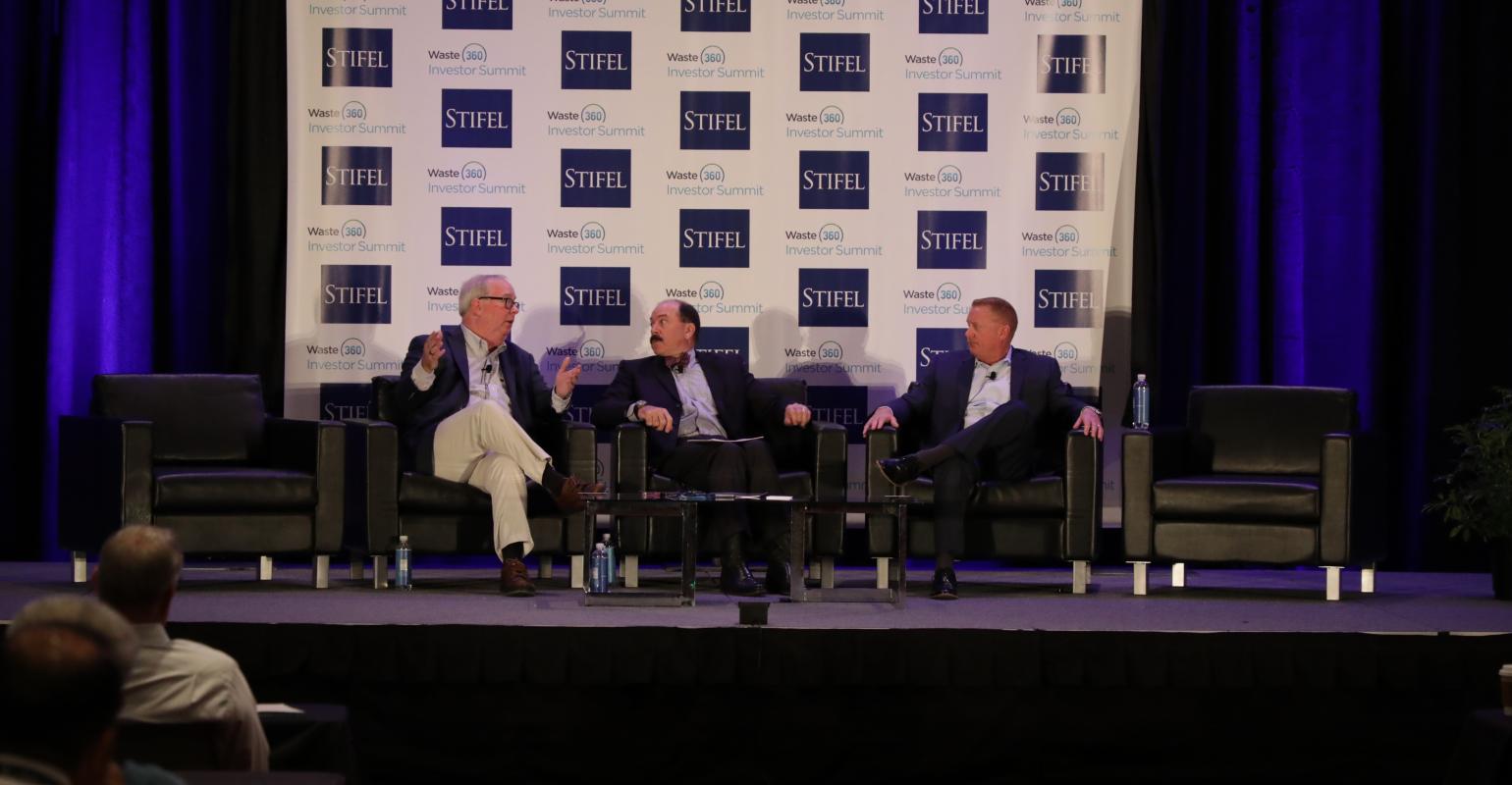 Impressions and Insights from WasteExpo 2018

This month of Business Insights is focused on impressions from the show floor and insights gleaned from the Waste360/Stifel Investor Summit and the panel discussion “China’s Import Regulations—Where Do We Stand?”.

WasteExpo 2018 took place last week in Las Vegas. Once again, the education sessions provided a wealth of information on key industry issues, which will be featured in future issues of Business Insights. This month, however, we are focused on impressions from the show floor and insights gleaned from the Waste360/Stifel Investor Summit and the panel discussion “China’s Import Regulations—Where Do We Stand?”.

Impressions from the Show Floor — Rockin’ It in 2018

WasteExpo was very well attended with around 14,000 participants and more than 600 exhibitors, and the mood on the floor was very upbeat, even ebullient. Haulers large and small reported strong volumes supporting a less competitive price environment, aided by continuing (and faster paced) consolidation by the majors. A strengthening economy, which began in 2017, was noted by a number of players with no sign of a slowdown in sight. It also appeared to be the best environment for equipment vendors in quite some time. Foot traffic in the booths was heavy and engaged—not just browsing! Heavy equipment manufacturers and container companies are generally sold out or backlogged, affirming the higher capex guidance given by the publicly-traded companies. Technology offerings were also very popular, with large crowds at truck camera systems and analytics providers like 3rd Eye and smart sensor providers like Compology, both considered increasingly necessary and well-developed technologies. Always of interest is also what was NOT the buzz. Last year, everyone was talking about Rubicon Global, while this year not so much, although the Rubicon booth seemed to have consistent traffic.

The China Fly in the Ointment

Although the recycling business is only a fraction of the solid waste collection and disposal business in size, it, unsurprisingly, garnered outsized attention, given China’s recent actions and their subsequent impact. (See our December Business Insights for background) Only Waste Management reported before WasteExpo, so the other publicly-traded companies had to be more guarded in their words, but nevertheless, WasteExpo still provided the first public forum since both China’s import bans on mixed paper and plastics and the 0.5 percent contamination standard were implemented. A number of key consensus themes seemed to emerge. First, China is not bluffing. As opposed to six months ago, when there was significant skepticism on the intent and extent of enforcement, the current feeling is that China is very serious and likely to strictly enforce its new mandates. It was also noted that the Trump administration’s recent trade actions pull recycling into the broader, less controllable political realm. Second, the fallout from China’s actions is worse than anticipated even two months ago. The 0.5 percent contamination standard and subsequent fear of having a rejected load has dramatically curtailed exports to China. Less than a handful of materials recovery facilities (MRFs) can meet that standard at all, and even then, not economically on a large scale. Thus, even as import licenses are now increasingly being granted, actual shipments are well below those license levels—in the first quarter, recycled paper exports are down 93 percent and recycled plastics 95 percent. And, although imports to alternative markets like India and Southeast Asia are spiking, they still cannot import the sheer tonnage that China did, so the resultant supply glut has pressured recycled paper prices more dramatically than had been forecast even two months ago. Surprisingly, plastic prices (at least HDPE and PET) are holding up. Unlike recycled paper, more haulers had already utilized domestic plastic outlets, and more recycled plastic processing facilities are popping up, which can happen much more quickly and cheaply than for recycled paper. That said, it can still be tough to find a home for mixed, post-consumer recycled plastic bales, especially numbers 3-7. The impact from China’s actions was first felt most keenly on the West Coast, given its dependence on export markets, but is now spreading inland, with 14 states heavily impacted and another 10 states feeling a noticeable negative impact. Landfill waivers granted by state regulators are on the rise.

All that said, most industry participants felt a pricing bottom has been put in, at least for old corrugated cardboard (OCC) and old news, and at least for export and probably domestic. The bigger debate now seems to be how much of a rebound could be expected and in what time frame. Republic Services’ management noted continued fiber and packaging demand, low inventories of OCC in China, relatively high virgin pulp prices and typical seasonality as factors pointing to a likely rebound in pricing. Mixed paper, on the other hand, has people throwing up their hands with no real prospect of a recovery in sight. Lastly, although there was some disagreement on how much consumers and businesses are willing to pay for recycling, what WAS a universal theme among all the company executives at the Waste360/Stifel Investor Summit (and in other WasteExpo forums) is that the recycling business model must be changed and fixed. Companies must continue to move to a processing cost/fee-based model to recover rising recycling costs and away from the traditional commodity price-based model. Part and parcel of this is educating customers and municipalities on the current realities and that recycling is not free (and the price will be going up)! Anecdotally, it was noted that a few recent, large municipal recycling contracts had received no bids. And obviously, all felt that rising contamination in the inbound streams had to be tackled and reduced, though most felt that single stream recycling was here to stay. On the first quarter conference call, Waste Management executives noted their hope that the focus would turn back to true recycling—using recycled commodities to reduce the consumption of natural resources—and away from diversion, and that was echoed by other players at WasteExpo. The emphasis on diversion has certainly been a culprit in rising contamination, as it encourages all kinds of unrecyclable items to be put in the single stream bin!

In any event, financially, recycling is proving to be a bigger headache and headwind than was envisioned as recently as the February earnings conference calls, and any substantial relief in the remainder of the year is certainly not guaranteed. Luckily, this is occurring at the same time as very strong traditional solid waste results by all reports, likely aided by stronger-than-expected E&P waste activity for those companies in that business line. Another positive offset is likely to be better-than-expected (based on show floor chatter) mergers and acquisitions activity, probably across the board. Waste Management topped its full-year goal for tuck-in acquisitions in the first quarter alone.

Transactions on the Rise with Some New Faces on the Floor

Right at the start of WasteExpo, GFL Environmental announced that it had signed a recapitalization agreement with BC Partners, a London-based private equity firm, and Ontario Teachers’ Pension Plan and others, taking a potential IPO in the solid waste industry off the table for now. According to reports, the implied multiple was very healthy, though other industry players would have preferred an IPO, which would have resulted in greater clarity and transparency with regard to GFL’s strategy. It was also noted that Blackstone Group and KKR & Co. infrastructure funds personnel were in attendance. These type of funds have reportedly raised significant sums of money recently and are looking to put it to work in the absence of a nationwide infrastructure plan thus far. Although there are a number of hurdles to their participation in the industry, it has been a long time since this type of investor has been trolling the solid waste space, or the show floor.