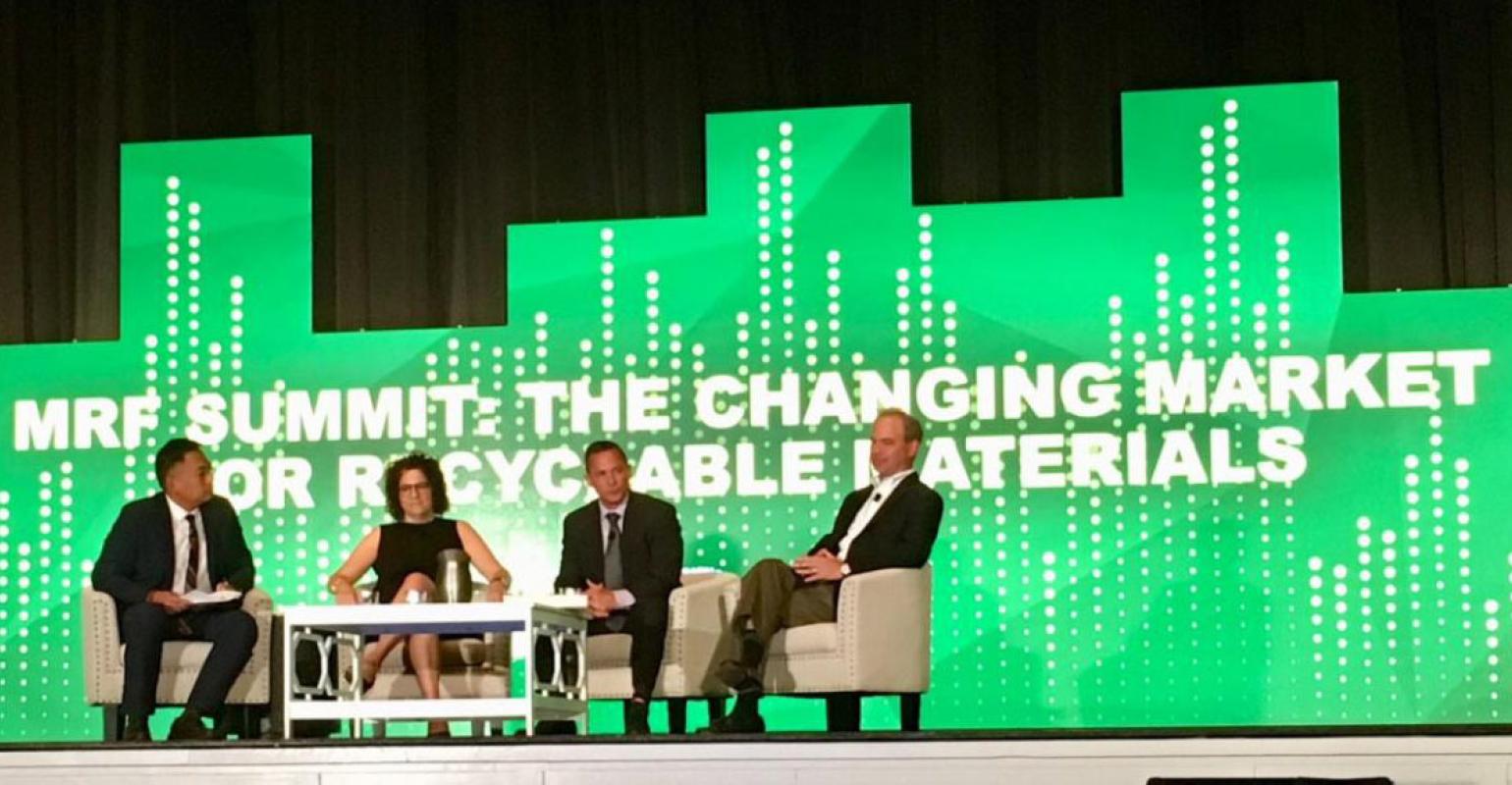 In this month’s edition of Business Insights, we present highlights from several of the keynote presentations and the MRF Summit, as well as impressions from the exhibit hall floor.

The Solid Waste Association of North America (SWANA) held its largest event, WASTECON, in Nashville in late August. In this month’s edition of Business Insights, we present highlights from several of the keynote presentations and the Materials Recovery Facility (MRF) Summit, which was the centerpiece of the conference, as well as impressions from the exhibit hall floor.

Chatter from the Exhibit Hall Floor

SWANA’s WASTECON was held August 20-23 in Nashville and hosted an animated crowd of nearly 1,900. As SWANA’s membership is more oriented to the public sector of the solid waste and recycling industry, there tended to be less business chatter and more recycling focus. That said, vendors at the show confirmed that business was brisk for both trucks and containers. Manufacturers are beginning to see some impact from the tariffs but apparently have been able to pass the increased cost along in higher prices given the demand.

Waste-to-energy firm Wheelabrator Technologies was present and seems to be moving forward on its initial public offering, though a sale of the firm could always transpire instead. Although new U.S. plant prospects remain limited, future growth is expected to stem from robust pricing anticipated in the Northeast and three U.K. plants that are due online by the end of 2019. On the other hand, Tunnel Hill Partners seems to have no near-term plans to go public, with further runway to expand secured by a recent funding infusion.

There were reports that a few of the private companies that are more recycling oriented are using force majeure, or at least the threat of it, to change recycling contracts, particularly on the East Coast. Pratt Industries has plans to continue to add domestic plants that use recycled fiber feedstock. Its first new plant is expected to be up and running in 12 to 14 months, but over the longer term, it intends to increase from its current five machines to 12 by 2030.

SWANA’s CEO and Executive Director David Biderman hosted a keynote presentation with Waste Connections’ (WCN) CEO Ron Mittelstaedt. Unsurprisingly, WCN’s recycling operations were a focus, with Mittelstaedt noting that the line of business is losing money, as WCN has seen its exports to China of recycled commodities drop from 72 percent of its total to 2 percent. He views China’s contamination standard of 0.5 percent, if not impossible, thoroughly uneconomic, and even getting below 3 to 4 percent as tough.

He also noted that the cost to collect and dispose of waste was in the range of $30 to $40 per ton, versus $125 to $165 per ton to handle recyclables in the wake of China’s actions. He forecasted that the model must and will change, and customers will pay more for the service as a result. He also thought that glass should be removed from the stream and that the number of items considered recyclable must be reduced and also removed from the stream. A better-quality product will find a market; the question is the economics of it.

Longer term, he thought the likelihood of six to seven new domestic paper/pulp plants beginning in mid-2019 that use recycled feedstock would help ease the situation, as well as the increasing use of technology on the line.

All that said, Mittelstaedt feels the strength of underlying solid waste business has not changed—if anything it has accelerated—though he noted the outcome of the mid-term political elections could be a risk. Otherwise, it looks like full steam ahead into 2019.

The merger and acquisition (M&A) environment was also characterized as the strongest in 20 years, with all the levers—tax reform, interest rate levels and the economy—pulled. Second half activity is expected to exceed the first half, and 2019 looks strong, too. Recycling and labor are his biggest concerns—WCN has 900 job openings and the current immigration impasse is a negative and has hurt WCN’s hiring prospects.

The MRF Summit—Choice Bits from Several of the Presentations

The MRF Summit was the centerpiece of the conference and presentations ran for a day and a half. The kick-off presentation, “The Changing Market for Recyclable Materials,” featured Biderman; Robin Wiener, president of ISRI; and Stephen Sikra from Proctor & Gamble (P&G). Wiener began by noting that 70 percent of the recycling/scrap handling industry was global, industrial and demand driven; thus, tariff and trade issues are a much bigger issue for this part of the business, versus the contamination issues that have plagued the remaining 30 percent of the business that is residential. That said, she noted that China and the U.S. are key—the U.S. exports 30 to 40 percent of its recycled/scrap material, and China had imported 30 percent of it—meaning 30 percent of the stream has to potentially find a new home. Her expectations were that recent tariff actions were only going to worsen the situation—for example, Turkey is the largest consumer of U.S. ferrous scrap. And her concern is that global supply chains will be altered, putting the U.S. at a disadvantage, despite the quality of U.S. scrap.

Sikra admitted that despite lofty P&G recycling goals, the MRFs are the last to know of a new packaging design. In response to that, and noting the proliferation of flexible packaging (which is more often than not impractical to recycle), Biderman said that it seems the brand owners had externalized some of the cost of flexible packaging to the MRFs and solid waste companies (to which comment he got a large round of applause from the audience). That said, all three presenters were lukewarm on the chances for extended producer responsibility in the U.S., and all stressed the need for more domestic recycling infrastructure.

In the panel “Single Stream vs. Dual Stream Collection,” a municipal sanitation representative from Florida gave a step-by-step roadmap on how to convert back to dual stream, prompted by a hauler charging significantly more when the town’s recycling contract came up for renewal. A representative of Balcones Resources in Austin (single stream MRF) elicited several horrified gasps from the audience when he noted that 27 percent of its incoming stream was glass. He noted the key to Balcones’ success (despite the glass) is a focus on preventative maintenance and labor—the company does not use temps but rather encourages long-term employment and careers. He also noted that 75 percent of its incoming residential (and 50 percent of commercial) is now worth nothing. Interestingly, Balcones has always had a tip fee/processing cost model—its charge to tip ranges from $55 to $85 per ton, while its average processing cost per ton is $65 to $75. The average processing cost per ton for the dual stream was $52.

In the final presentation, “Looking to the Future,” Nina Butler of More Recycling and Bill Moore of Moore & Associates spoke about the recycled plastics and recovered paper side, respectively. Butler noted that while PET and HDPE had decent domestic markets and stable pricing, the shale oil revolution and its impact on oil prices and the new virgin capacity expected to come on did not bode well for plastic recycling and recycled plastic pricing over the longer term, and she saw a long haul of low prices. She also noted that many types of plastic and much of the flexible packaging was not really recyclable at present, but they are relatively low weight in the stream, so it makes it hard to justify investment to recycle them.

Moore noted that on the recovered paper side, we are off the bottom—not just in terms of price, but also in education and the use of technology. That said, he felt it would be a long time before we saw significant improvement in mixed paper pricing. Moore explained it is 40 percent of the MRF stream and forecasted that at least 480,000 tons will be landfilled. He noted the interest in restarting or converting U.S. mills but pointed out that there were few firm investments as yet. Importantly, he said that domestic mills can handle 2 to 3 percent contaminants, so ultimately, when more domestic capacity does come online, why even try to sort to 0.5 percent? Bottom line, he believes that with box demand, prices for old corrugated cardboard (OCC) won’t be stuck low for long, and the trend line remains up.