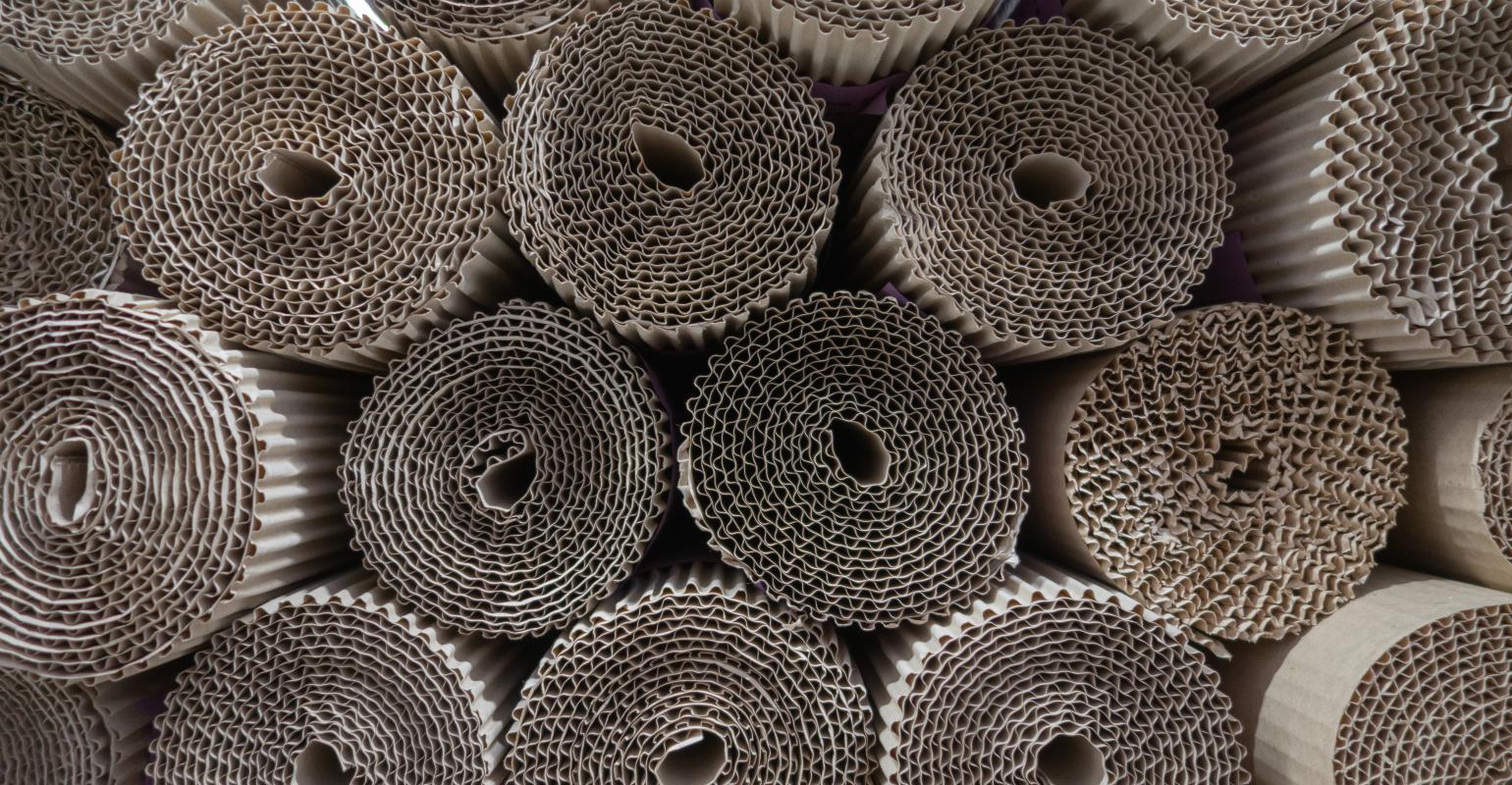 Over the last couple months—and since China launched its ban on certain recycled commodities—a lot has happened in the recovered paper markets. And according to Bill Moore, president of Moore Associates, there is more to come.

During a recent Stifel Capital Markets conference call, Moore says he remains “cautiously optimistic” about old corrugated cardboard (OCC) markets moving forward. He also reports mixed waste paper (MWP) is at an all-time low and that demand is strong for finished paper product to be converted into boxes.

“There was a peak in the beginning of 2017, and then China caused chaos for the next year,” explains Moore. “Interestingly enough, in the first half of this year, particularly the second quarter, you see upward movement in prices.”

“Going forward, we clearly made a bottom in OCC prices, and we’re starting to come off of that,” adds Moore. “But we expect mixed papers will go down and the high grades will continue to move up.”

Regarding mixed paper prices, Moore points out that since prices for the first half of 2018 are well down, they have subsequently pulled the whole trendline down.

“We had a slight trendline down even before the China situation kicked in,” he notes. “I don’t see any rebound in mixed paper prices in the second half of 2018. It is possible that it will get a little worse, but I do think we’re kind of at or near the bottom, but I don’t see any uptick going forward for some time now.” 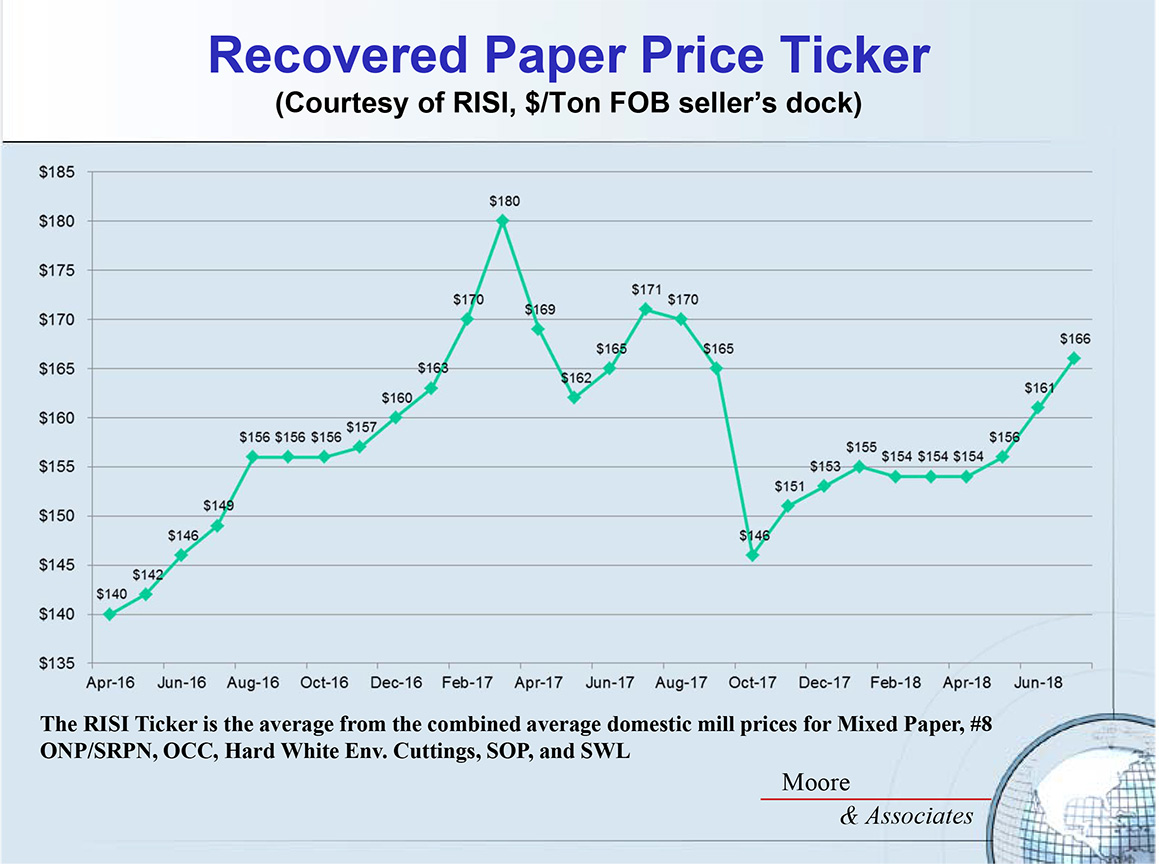 When looking at relative prices of mixed paper to OCC, Moore also points to a downward slide that has been going on for a year now—it’s one that is stuck at the 12 percent range. Comparing that to the previous 10 years before 2017 when China was strongly buying, the mixed paper market averaged in the 60 percent range.

“If you go back in history, we used to run 20 to 30 percent, and we passed through that threshold coming down and we’re at kind of an all-time low at 12 percent,” explains Moore. “We will probably be stuck in the 10-to-12 and 20- to 30-percent max as the markets go forward.”

Moore points out that domestic demand for OCC has been strong, while exports in China have been weak. One of the things he believes is slowing the market down is the additional OCC coming from the solid waste sector and the materials recovery facility (MRF) sector because of separating as much OCC as possible from mixed paper.

In addition, the OCC level and mixed paper coming into MRFs is increasing due to e-commerce. 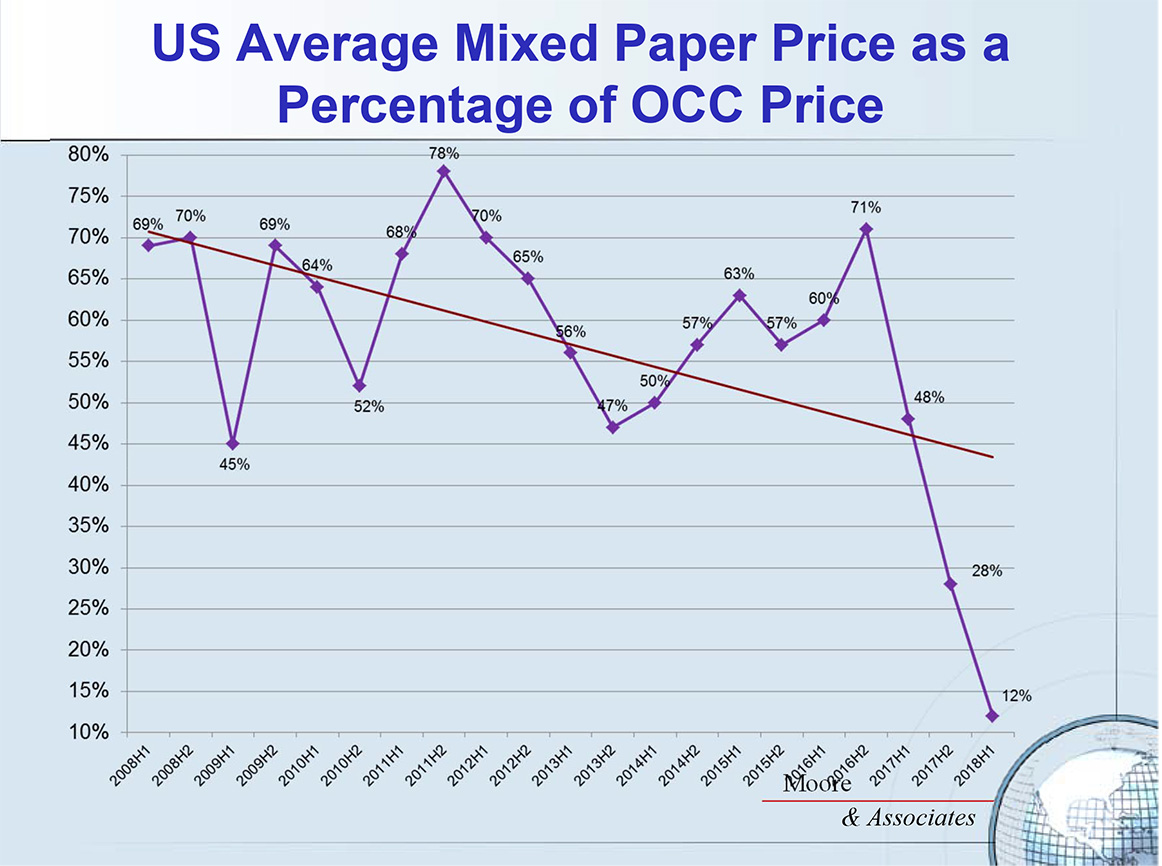 “But because of the very low values and difficulty moving mixed paper, the MRF guys are energized to produce as little as possible, and that’s created some extra OCC supply, which has held prices down in the second quarter,” says Moore.

“I think the outlook for OCC is cautious optimism going forward,” he adds. We probably should get some uptick going forward. The U.S. domestic container board and box business is very strong.”

And so is the global business, notes Moore. Multiple startups are developing in Europe, and new startups are coming into Southeast Asia. It is also worth mentioning that just last week, there was a continued announcement of more downtime in the China board and container production industry because they are short of fiber, notes Moore.

In the U.S., from 2016, 2017 and through May 2018, there has been really no change in domestic mill consumption, Moore points out. But there are two things going on:

To date, there’s only been one company, in Australia, that’s been a big user in mixed paper in its eastern U.S. mills. And that company has another mill planned in Ohio that’s currently under construction. In addition, offshore interests, mainly China, are looking at putting systems into the U.S. to make pulp from mixed paper, according to Moore. 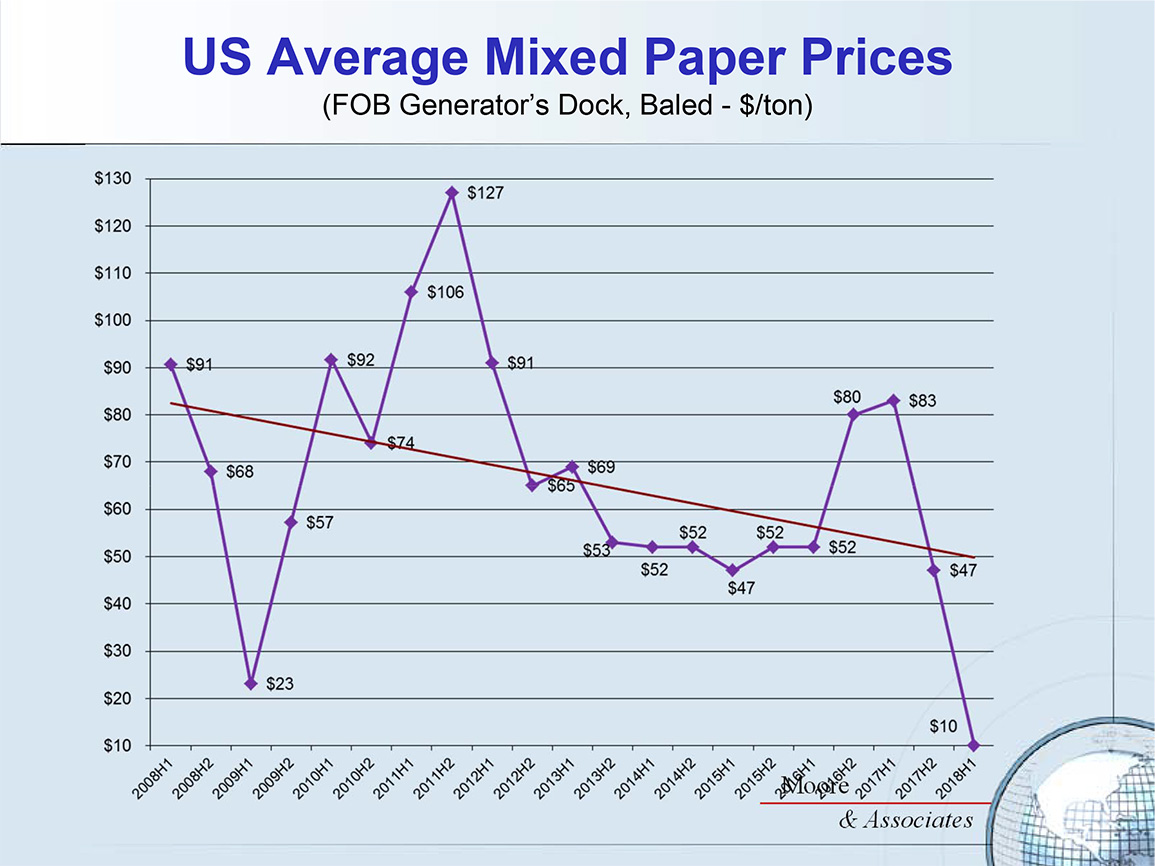 “Another mill beyond Ohio is very likely,” he says. “Green Bay is the first big announcement of a new replacement mill, which will consume significant quantities of mixed paper. And then there has been a technology announcement from Georgia Pacific about new technology to be able to use mixed paper, and they are putting a semi-commercial unit into a Toledo, Ore., mill aimed at using fast-food restaurants’ mixed paper streams.”

He also adds that the recent Nine Dragons’ purchase of two mills in the U.S. indicates that China could change its mind on the imports of mixed paper.

Both Chinese and traditional U.S. paper producers, developers, as well as collectors of MRF processors are examining whether they should vertically integrate backup in the chain to produce pulp, and that includes players in the solid waste industry, says Moore.

So, who would use this pulp?

“There is some domestic potential to use residential mixed paper pulp with the current supplies, but these are small users,” says Moore. “The game is really going to be offshore export to China because this pulp will be clean and can move to China.”

However, Moore points out, there is a growing concern that if China is banning U.S. mixed paper from coming in, then other Southeast Asian countries will also push back. And some of them—namely Thailand and Vietnam—already have.

Another question Moore raises is whether the MRFs maximize OCC removal from the incoming stream, which is what’s going on right now. Could that be the new revenue model?

Possibly, notes Moore, but the high OCC content in mixed paper makes it a more usable pulp as the OCC strong-craft fibers are what people seek the most from the mill and product performance.

What’s Next for China?

Moore explains that there does not seem to be a trend to convert high-quality OCC into pulp, but that, too, may come to pass as China may ban outright all imports of RCP (recovered paper) by 2020. And there is no relief for the 0.5 percent contamination standard, he adds.

“We believe China has always wanted suppliers of RCP—CC or MWP—to convert it to pulp, dry it and ship pulp to China to be made into paper that can be converted into packaging like corrugated boxes,” he says in a statement. “If there is to evolve long-term export alternatives for MWP, that outcome is virtually a certainty. Will China take that lead, buying pulp mills or newsprint mills and converting them to pulp for MWP? Will existing domestic paper makers convert mills to pulp MWP? There is a slow but gradual trend in the USA to support that thesis.”

What could that mean for solid waste service companies?

“It has to be seen as good news recovered paper prices have firmed (OCC) and are nearing a bottom (MWP),” notes Hoffman. “It also appears solid waste is being proactive and using force majeure or ‘the doctrine of commercial impracticality’ to drive contract changes. Already, municipalities are bearing increased costs and passing them along where they are directly impacted or ceasing recycling altogether until there is more clarity on the supply/demand and price environment of the recycled paper markets.”

“These trends fit our narrative that the recycling issue is a fiscal year 2018 event, and in fiscal year 2019, we get back to focusing on really good solid waste fundamentals,” he adds.