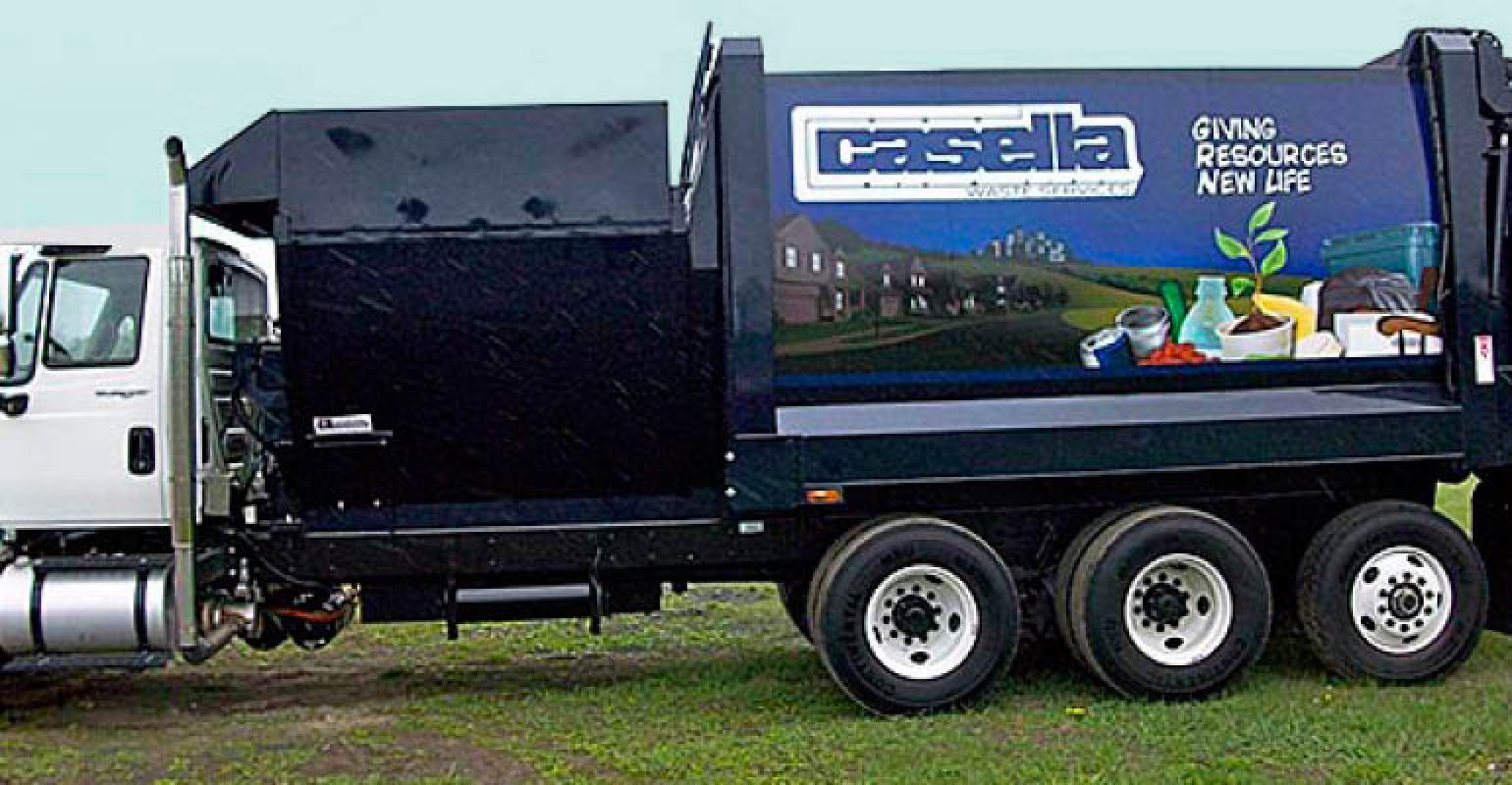 We recently spoke with John Casella, CEO, and Ned Coletta, CFO, and in this month’s edition of Business Insights, we attempt to distill our discussion of the new plan.

In 2015, Casella Waste (CWST) set out a three-year strategic plan that it will essentially meet, if not exceed, a year early. As a result, speculation abounded as to when the company would unveil a new plan. In conjunction with its second quarter conference call, management outlined new strategies and goals for 2021.

We recently spoke with Casella CEO John Casella and CFO Ned Coletta and in this month’s edition of Business Insights, we attempt to distill our discussion of the new plan.

The company had three key focus areas in the prior three-year plan that were reaffirmed in the new 2021 plan—increasing landfill returns, driving collection profitability and creating value through resource solutions. With regard to increasing landfill returns, the focus had been on raising landfill pricing in its Northeast markets, reflecting not only the widening supply-demand imbalance, but also the very high cost of permitting and developing landfill capacity in these markets. Within the 2021 plan, that focus remains the same, with a few new twists.

First, given the expected 2018 closure of CWST’s Southbridge Massachusetts landfill, 3.6 million tons per year of disposal capacity are expected to close in the next couple years in the Northeast, versus 2.5 million tons projected previously. Thus, although the decision to close Southbridge was a disappointing setback, it will increase the state’s capacity constraints, and as a result, Massachusetts’ tip fees are expected to rise $5 to $10 per ton.

With this increase, it will be more feasible to ship waste to CWST’s New York state facilities, where it has 800,000 tons of annual capacity available. And, although the planned Southbridge expansion was ultimately not successful, management noted that they have had very good permitting success at other landfill sites—Juniper Ridge in Maine and Hyland, Chemung and Ontario in New York—thus the company still has the leading position to take advantage of the changing market dynamics.

John Casella also noted that with the acquisition of Progressive Waste by Waste Connections, there is now a more rational competitor in upstate New York that is already favoring less volume and more price at the Seneca landfill site. Turning to driving collection profitability, the Massachusetts’ dynamics come into play here as well.

CWST intends to raise collection pricing to compensate for landfill inflation in Massachusetts. Also, given the high cost of environmental regulations and permitting in the Northeast, CWST has also instituted an energy and environmental (E&E) fee that combines a floating fuel surcharge with an environmental fee, in an effort to recoup these costs. The E&E fee is currently being rolled out across the company’s customers.

The company’s management also sees further opportunity to drive costs out of the collection system through greater route efficiencies and better fleet optimization, and a new fleet manager has been hired. CEO Casella believes they are in the sixth or seventh inning with regard to the price opportunity and the third or fourth inning in potential operating efficiency gains.

In the resource solutions area, the company has been able to create tremendous value with its sustainability recycling adjustment (SRA) fee. As a result of the successful rollout of the SRA, the return on invested capital in the recycling line has risen from 2 percent in 2015 to over 22 percent, although the average price per recycled ton is over 25 percent lower than the last time returns were in excess of 20 percent.

Management believes it has fixed a fundamental aspect to the recycling business, which is key to the Northeast market in particular. Organics are expected to be a growth area in the Northeast, given a number of state initiatives, but management stressed that they want to cater to the customers who are willing to pay for this service, and not be on the “bleeding edge”—in other words they intend to take less risk in this new market than in the past.

In addition to the prior key focus areas, CWST management has added two new ones, the first being a goal to reduce SG&A as a percentage of revenue by 75 to 100 basis points by 2021. Coletta noted that the SG&A opportunity basically falls into two buckets. First is updating the financial information systems to drive back office transformation and improved customer service. CWST is investing $2 million in 2017 on a new Oracle NetSuite ERP system, which is slated to start up in the first quarter of 2018.

The company has added staff and partnered with a consultant on a fixed cost basis, and the project is expected to have a return of more than 30 percent. By 2019, the new system is expected to not only strip out costs, but enable better growth. The second bucket consists of a new salesforce initiative, powered by a new Microsoft CRM system, replacing five different platforms. All sales will now be on one version, which will not only aid cost efficiency but enhance cross selling opportunities. The system will allow management to understand what its spend is in the sales force, and increase its efficiency by having point people for different areas of company expertise to enhance cross-selling.

Capital Allocation to be More Balanced

CWST has made enormous strides lowering its leverage ratio over the past few years and decreasing its average interest rate. As of the second quarter, the leverage ratio was below 4x and the average interest rate around 4 percent. As CFO Coletta noted, it is now time to balance reducing leverage and putting free cash flow to work in growth investments, rather than exclusively paying down debt with all available free cash flow.

For CWST, at this stage and given its relatively smaller size than the peer group, prudent organic growth investment and targeted acquisitions make more sense than returning cash to shareholders. Management has identified more than $500 million in acquisition opportunities that lay over the top of its existing base.

There are around $250 million of tuck-ins, with revenues ranging from $1 million to $14 million, while there are another four to five companies in the Northeast with $40 million to $50 million in annual revenues. CWST also sees the acquisition environment as increasingly favorable over the next three to five years—third party haulers are increasingly squeezed by the landfill and environmental cost inflation previously discussed, as well as labor costs, and many risk their value declining over the next several years as a result.

This also makes them not as attractive to other players who lack CWST’s disposal and recycling infrastructure in the region. Management targets $20 million to $40 million in acquisition spend annually, which they view as very realistic, although that will not be budgeted or baked into projections. CWST has rebuilt a development team in order to reignite its acquisition program, with two people sourcing acquisitions, which once identified as likely, will get turned over to the regions for pro forma financial projections—as local management will be the ones ultimately responsible for the integration. For the tuck-in acquisitions, management anticipates paying EBITDA multiples between 3.5x and 5x post-synergies.

Although CWST did not set out as many explicit target ranges as in its prior plan, it did set out several. The company believes it can grow 3 percen to 4 percent annually organically, and that is inclusive of a roughly 2 percent headwind from the closure of Southbridge over the next two years. About 2.0 percen to 2.5 percent of that is anticipated to stem from price and the remainder from volume, in an industry generally believed to be growing underlying volumes at 1.0-1.5 percent.

The company also sees free cash flow growth of 10 percen to15 percent annually, which should result in free cash flow in the range of $50-$60 million by 2021. Leverage is anticipated to fall to 3.0-3.25x by 2021. And, lastly, although not expressly targeted, management thinks the company is on a path to solid waste EBITDA margins in the high 20s percent, versus current levels of 26.0-26.5 percent.