From Out of the Ashes, Fire Safety Partnership Emerges 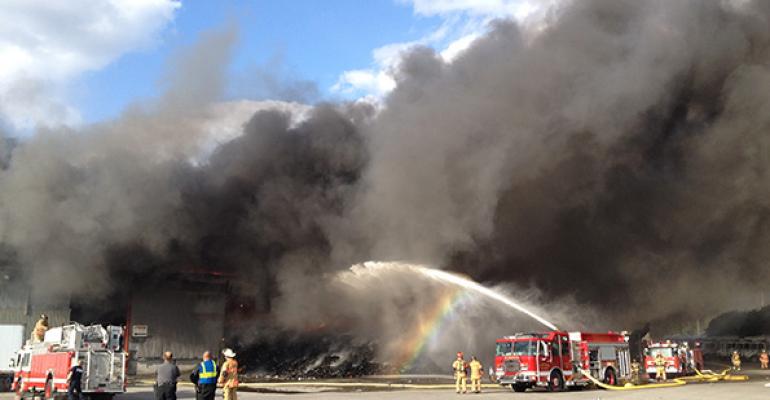 When the wrong recyclables caused a four-alarm fire at the Rumpke recycling facility in St. Bernard, Ohio, it sparked a new safety plan of action for the Colerain Township-based hauler and forged a new partnership between the company and its local fire department.

Fire is a well-documented industry hazard whether it’s in a truck, a transfer station, landfill or MRFs, says Rumpke Director of Safety Mike Puckett. As MRFs expand and become production facilities housing employees and millions of dollars in equipment, fires are becoming even more prevalent. 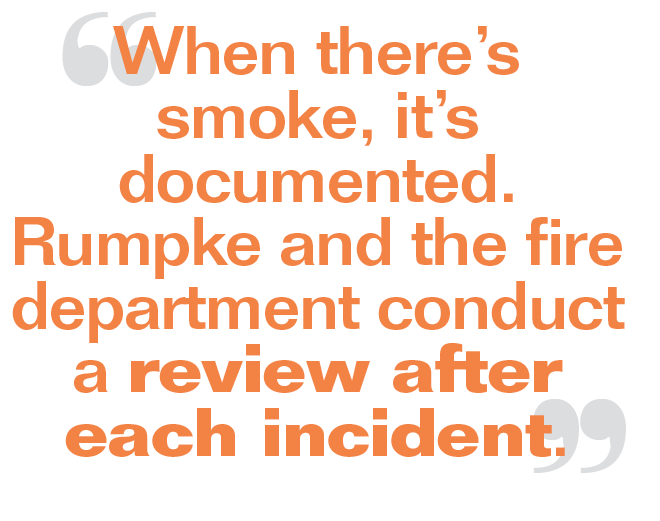 “Maybe it’s a piece of doing business,” Puckett says, “But it’s a serious issue that I think Rumpke has taken very seriously since 2012.”

Fire safety was top priority in the facility rebuild, says Puckett. Employee training includes the use of fire extinguishers, evacuation plans and the telling and retelling of the 2012 fire.

Puckett says Rumpke involved the St. Bernard Fire Department in the MRF rebuild of its 100,000-sq.-ft. facility, and continues that relationship today.

“They are side-by-side with us at that facility,” he says. “They conduct our fire extinguisher training. They’re in the facility taking tours with new firefighters. They know where the tipping floor is at. They know where the bailer is and where we store bails, so if they need to respond to the building, they know exactly where to go based off of our phone call.”

Rumpke invited the department to train at the MRF, he says. Fire departments must meet annual training requirements, and Rumpke’s MRF gave them a new environment to work in. St Bernard has conducted mock rescues using platforms and high-angle rescues that involve ropes and rigging equipment.

“Just to get the fire department acclimated to our facility and build that relationship—I think that’s one of the best 'best practices' if you’re going to run a MRF. You need to develop that. And I’ve seen it pay dividends at our new facility,” says Puckett.

It’s something Puckett stresses when talking to other safety leaders in the industry. Building that relationship with the fire department helps acclimate safety personnel to what the industry does, the layout of the buildings and the life-safety issues involved.

“It’s amazing how much information you absorb by actually seeing things, walking through things and learning about the systems. So that’s about the biggest thing that can be done to prevent future fires,” he says.

That information helps with life safety, which is top priority at any safety event, says Mirick.

“It’s always nice to know the easy way to set up before the emergency happens,” he says.

The company also uses an internal reporting system for mishaps like chemical reactions in its recyclables. When there’s smoke, it’s documented. Rumpke and the fire department conduct a review after each incident. Occasionally a commercial customer might dispose of glass that contains combustible chemicals, which instead of being recycled, introduces a hazard into the MRF environment. Following the investigation, Rumpke tracks down the offending customer to educate them.

“I’ve never had one company say we’re doing anything wrong by coming to them. They’re sometimes as surprised as we are,” Puckett says.

Fire safety is something Rumpke has in common with customers, he says.

“No business wants to encounter what we did a couple years ago," he says. "When they hear our story—because it was big news here in Cincinnati—they remember the fire and they appreciate us coming to them and pointing those items out.”

Education is a constant battle, says Amanda Pratt, Rumpke director of corporate communications. Rumpke offers site tours to educate new commercial and industrial customers and the employees who will be disposing of the trash and recycling. It gives them a clear picture of what materials are considered appropriate, she says.

Residents, too, need reminders. The company is working to shine a light on the process through MRF and landfill tours, social media, newsletters and even its own YouTube channel with more than 30 videos.

“It’s that whole thought that it disappears,” says Pratt. “Rumpke picks it up, and not a lot of thought is given to what needed to happen to those materials next. We want our customers to receive the service, but at the end of the day, nothing is more important than the people involved in the operation—our employees.”