How Haulers and Municipalities are Battling Recycling’s Economic Woes

It’s been the dark cloud hanging over the waste and recycling industry the past several years. There’s the general desire to increase recycling. But prices for recycling commodities have fallen to the point that it’s not economical for haulers and processors.

Something has to give. Waste and recycling industry executives have been vocal that the model as it’s been constituted is largely broke. So what’s being done to fix it?

One key problem is the amount of contamination in the material, exacerbated by single-stream collection. Haulers and processors are battling that through education.

Single-stream recycling has greatly increased volume. But Waste Management has seen its contamination rate double in the past 10 years, says Brent Bell, vice president of recycling for the Houston-based company.

“Contamination impacts our cost of processing,” says Steve Sargent, Rumpke director of recycling. “We’re trying to reduce our downtime because of items that are coming through the system.”

The education effort, with both residential and commercial customers, also allows the company to make a better quality product–which is essential with the surplus of material available. “The better the material the better these plants will run, and it drives more costs out of our system,” he says.

Rumpke has made its education effort through a variety of outreach, including a public awareness campaign using a variety of mediums. “We kind of really hit hard on making your recycling efforts count,” says Amanda Pratt, director of corporate communications for the company.

Rumpke also is constantly looking for ways to reduce processing costs, so another emphasis in the recycling battle is looking at new technologies.

“You have to couple with that the challenge of the composition of the recycling stream today,” Sargent says. “It’s changing. It’s actually changing dramatically. Especially with the loss of our higher-density products.”

Processors are seeing less fiber from paper, and to some extent less glass. It’s being replaced by lighter packaging material. Rumpke has introduced some new screen technology into its plants to respond to this challenge.

The other effort by haulers and processors, much talked about, has been changing the arrangement with customers to share the risk as well as the reward of volatile commodity prices. 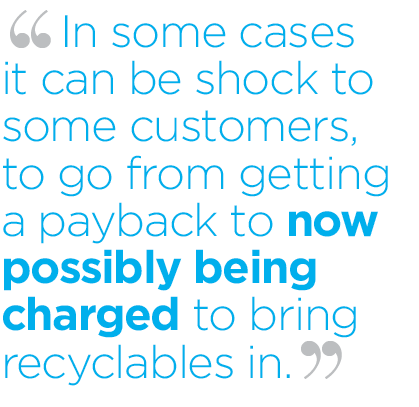 “Consumers are now having to be educated on the economics of it, which is, there could be a charge for the recyclable program, where they haven’t seen that in the past,” Bell says. “We’ve really tried to do a job on the educating the generating customer or the municipality on the value that’s in that stream, and that we’re happy to share that value when it exceeds the processing cost. To stay in business we have to have our cost to process covered by those generating customers.”

Rumpke as well has been seeking what it calls “participatory contracts” to reflect the changing commodity value.

Sargent points out that the commodity price reduction has been slow–the value has dropped by about half during the past four and a half years. “We have been doing these things along the way. I think our customers need to recognize that. This just didn’t happen to us yesterday.”

The reaction has been mixed. “In some cases our customers are very aware of the commodity markets in general,” Sargent says. “In some cases it can be shock to some customers, to go from getting a payback to now possibly being charged to bring recyclables in.”

Bell says some of the fault for customer misunderstanding about the recycling markets lies with the waste and recycling companies. “Just like we did a poor job of educating the residential and the households on what goes in the bins, we probably just took for granted high commodity prices for so long that we really failed to even educate our municipalities on what the value of glass is and what makes that value change. What happens with cardboard, shipped to China ... when China’s GDP (gross domestic product) gets cut from 14 percent to 6 percent, that’s going to have an impact on the commodity that’s picked up in Idaho or in Chicago or places like that.”

Often municipalities are understanding, he says, and want to continue to be good partners.

“Then there’s the other side, that’s are notable, to say, ‘if you guys aren’t willing to take the risk for us any more, then we’ll find another service provider that will take that risk on.’ In those situations we’ve had to close down some facilities in those markets where we weren’t able to come to an agreement on the risk scenario.”

The city of Portland, Ore., believes it has a contract pricing system with private haulers that is fair to everyone, says Bruce Walker, solid waste & recycling program manager with the city’s Bureau of Planning & Sustainability. “There’s been a significant decline in the prices paid for these commodities,” he acknowledges.

The city does an annual rate review. It reviews hauler financial records. It averages over three years the revenues that haulers receive from recycling.

With the last review, and for the first time in Walker’s 20 years with the city, haulers weren’t getting positive revenues from their recycling collection. While at first it looked like Portland residents might get hit with a rate increase for collection, the city found in the haulers’ financial reports some operating efficiencies, so that saved most residents from getting an increase.

“Looking forward, if these lower markets continue–let’s say they do drop for the entirety of 2015–then we’d have two of the three years being negative revenue that haulers paid, that would put further upward pressure on our rates.”

Walker says the city certainly would pass along a recycling rate increase to residents if it believed it was warranted.

“That’s part of our system. I do not believe it would be a fair system either way, whether it’s haulers to assume all that risk, or when let’s say better markets came along, that they would have additional profit because of more revenue coming in.

We believe our system balances things in a reasonable way. I’m sure it’s not perfect, but you take a look at revenues averaged over three years, it seems like a reasonable approach.”

It may take some time customers to get adjusted to the new market realities. “I think we’re going through a change in the recycling processing world, and I think we’re probably entering a new phase,” Sargent says. “A lot of that is tied to this composition change within our recycling stream. We’ve got to be prepared to handle these changes.”

Aggressive recycling goals instituted by governments also may be exacerbating the problem. “Are we pushing further into a stream that may be more difficult to recycle?” asks Sargent.

But here again, working together can achieve the best success, adds Bell. “When they have aggressive goals, the one thing we’ve seen is, as long as we’re able to provide them options on achieving those goals and solutions, then that’s really where I think the partnerships work out the best.”

Cities such as Portland are highly motivated to recycle, Walker says. While no one wants rate increases, there’s a general willingness in Portland to make it work. “There’s no way we’re not going to collect recyclables. That is not going to happen in our city,” he says.

Bell sees the situation as evolving, and it will take time. “I don’t think you’ll see a lot of processors taking on risk like they did before. I do think municipalities are going to have to look at this model and change it.”

Sargent believes in the future material recovery facilities (MRFs) will need to be more flexible with the changing commodity stream.

The economics are less than robust for two markets that have a big effect on the recycling business–oil and China. “We see this market staying in these ranges for the next couple of years. We’re just going to have to get used to it. And we’re also going to have to seek some assistance from our customers,” he says. “Our challenge has been, and our philosophy has been, that recycling needs to be the cost effective alternative to waste disposal.”

Pratt sums it up: “At the end of the day we have to educate every person that’s considering participation in recycling, to all sides of it, and what’s necessary to make it work. And it’s changing, and we need to plan for those changes. And as an industry, that’s what’s happening.”