What we call a landfill today may not be anything like the landfill of tomorrow,” says Mark Roberts, P.E., a vice president and senior solid waste project manager in the Jacksonville, Fla., offices of HDR Engineering.

That’s been true for years. Are you old enough to remember when we began to convert dumps into landfills? In 1976, Congress enacted the Resource Conservation and Recovery Act (RCRA). The law required that open dumping of all solid wastes cease by 1983 and that non-hazardous municipal solid waste be disposed of in specially designed sanitary landfills.

In the 36 years since, sanitary landfill design has evolved into a creative science and gone far beyond the basic components of the composite liner, liquid and landfill gas management systems, and closure covers. Today, a variety of alternative design concepts — most notably bioreactors — have emerged. And more ideas are on the way — landfill mining, bioreactor modules built inside of dry tombs and even final covers designed with geo-membranes and solar panels.

The basic components of sanitary landfills include a composite liner, a leachate management system, a storm water management system, a landfill gas (LFG) collection system, daily cover and the final cap. Except for the LFG collection system, these components combine to create a tight tomb that prevents leachate from leaking out and affecting the groundwater in the area.

According to regulations set by the U.S. Environmental Protection Agency (EPA), the composite liner must have two components: a layer of compacted soil at least two feet thick with a “hydraulic conductivity of no more than 1 X 10-7 centimeters per second. Atop the layer of soil is a flexible membrane liner (FML) at least 30-mil thick.”

“The regulations also require you to manage leachate so that it doesn’t build up on the liner,” says Pat Sullivan, senior vice president and solid waste practice leader for SCS Engineers.

Specifically, EPA regulations require operators to limit leachate buildup on the liner to less than 30 centimeters (just under one foot). To meet the requirement, the leachate management system must be extensive enough to capture the volume of leachate produced by the landfill, which can vary widely.

“Using data about annual precipitation and the volume of trash expected, you can run a computer model to estimate the amount of leachate a landfill will generate,” Sullivan says.

The pipes capture leachate as it drains down from the surface through the refuse, carrying it to a sump. A pump removes the leachate through a vertical pipe running from the sump to the surface. 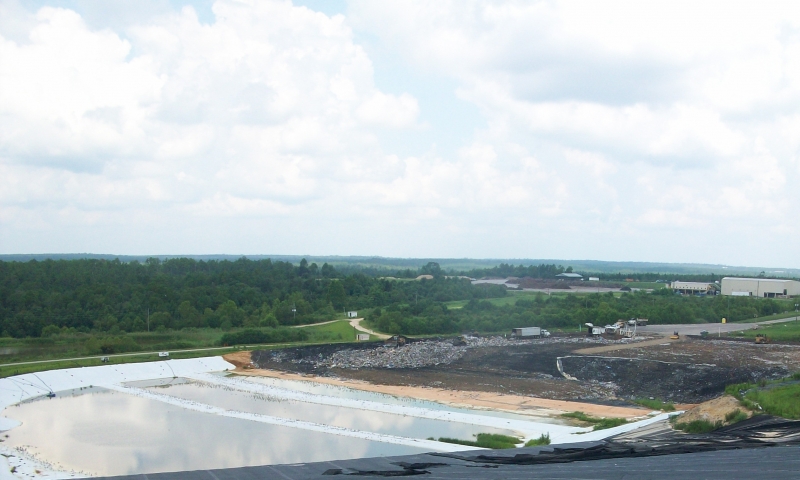 Each landfill cell has a leachate collection system and sump. Early landfill designs placed the sump in the center of the cell. Piping ran out to the perimeter and up the side slopes.

Figure out the best location for each sump by laying out the cells ahead of time as part of a site master planning exercise, continues Roberts.

Leachate recirculation also speeds the production of LFG. Federal regulations require large landfills to collect and manage LFG, leaving operators with two choices for managing it: flare the gas or put it to productive use as an energy source.

“As natural gas prices have risen, LFG has grown more valuable,” says Roberts. “Selling the gas to a company that constructs landfill-gas-to-energy (LFGTE) projects can be a very good investment for landfill owners, especially those already obligated by regulations to actively manage LFG.”

LFGTE projects can produce the best results for owners if they are designed and installed as new landfill cells are engineered and built, Roberts adds.

Storm water that flows into a landfill becomes leachate, and the landfill’s leachate management system will handle it. But preventing storm water from draining into the landfill in the first place means less leachate to manage. “Leachate costs money to treat,” says Roberts. “One way to minimize leachate during the initial phases of a new cell is to place a polyethylene rain flap — a sheet of plastic — on top of a new cell. Then fill the cell from the high end, peeling the plastic back as you go. That way you can manage the run-off that hits the rain flap as clean storm water.” 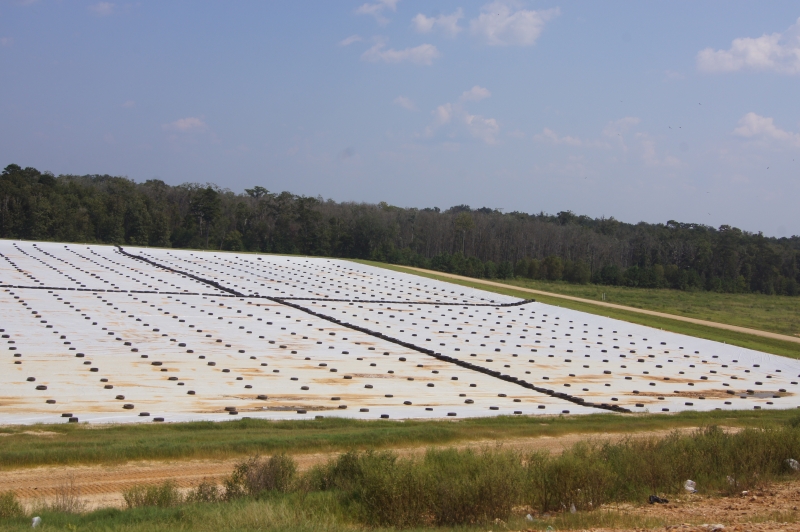 Storm water that drains off of a landfill cell covered with plastic or under a final cover picks up sediment. A landfill operator must manage that storm water to prevent the sediment from washing off of the site.

“When water hits a steep slope along the side of the landfill, it picks up speed as it moves downhill and picks up a lot of sediment,” says Steve Smith, area environmental manager in the Chicago offices of Phoenix-based Republic Services, Inc. “We build terraces on the slopes and spread rip rap [gravel used to prevent erosion] around. When the water slows down, it picks up less sediment. Then we install silt fences to trap the sediment before it leaves the property. Eventually the water runs into a detention basin. In the basin, the sediment filters out, and we discharge the water at a rate that the property would naturally discharge water if there were no landfill on it.”

Sometimes, engineered alternatives to basic federal, state or local requirements can cut a landfill’s capital costs or operating costs. During the design and permitting phase of building a landfill, engineers labor to come up with alternatives that will do what the regulations require but at lower costs.

“Owners can save big money by finding alternatives for the composite lining system,” says Sullivan of SCS. “Reducing the soil layer by six inches or using a lower-ply FML can lower capital costs significantly.”

In a dry climate, it may be possible to replace the FML entirely with a second layer of compacted soil, Sullivan notes. On the other hand, if this dry area happens to be in a seismic zone, flood plain or a bay area with tidal mud, regulators may deem these types of alternatives unacceptable. In some cases, an agency may require an alternative like a double liner.

Regulations also control the steepness of a landfill slope. “The steeper the better from the landfill owner’s point of view,” says Sullivan. “A steep slope maximizes airspace.”

But a landfill in an unstable environment may be required to flatten out the slope and perhaps even add a soil berm to support the slope.

Another candidate for alternative design is the landfill cover. Regulations require six inches of daily cover soil, but regulators accept alternatives such as foam, removable plastic liners, shredded green waste, compost material, waste products from construction and demolition projects and more. Depending on the cost of soil in a particular area, using alternate daily cover materials may reduce costs.

“A typical final cover system has a layer of soil, an FML and a layer of vegetation,” says Sullivan. “If you can do away with the FML and reduce the thickness of the soil layer in a way acceptable to regulators, you can significantly reduce costs. We’re seeing a lot of these kinds of systems approved in areas with little rainfall and even moderate rainfall.”

For a number of years, federal and state environmental protection agencies, as well as industry, have been studying bioreactor landfills — landfills that collect leachate and then recirculate it, speeding the decay of organic materials and allowing them to settle faster, generating more airspace and boosting the methane that feeds LFGTE systems.

“Under the EPA’s bioreactor research and development rule, you can apply for a permit to build an R&D [research and development] landfill,” Sullivan says. “If you receive a permit, you will have to comply with more strict regulations governing R&D landfills. Bioreactor regulations require enhanced liners and leachate and gas management systems as well as comprehensive monitoring systems.”

The goal is to design bioreactors that can expand the capacity of active landfills, increase the production of LFG that can be sold, and shorten the 30-year period of long-term post closure care now required of landfill operators.

“This is a significant design change from the original Subtitle D ‘dry tomb’ landfill,” says Sullivan. 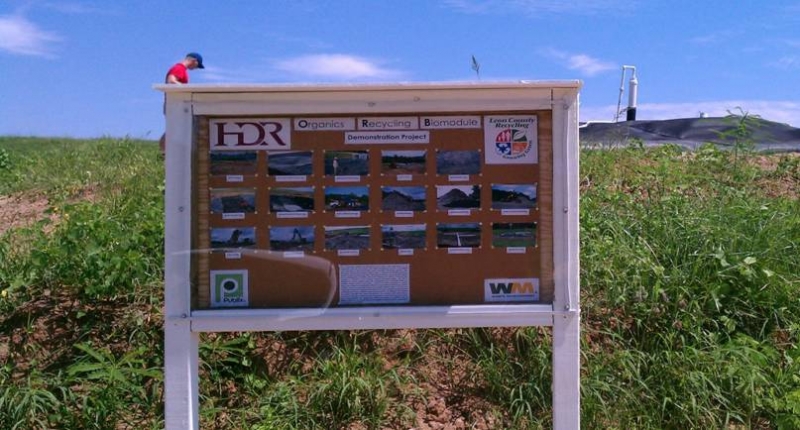 “As energy prices continue to rise, there are lots of BTUs to be recovered from plastic recyclables buried in landfills,” Roberts says. “We’re beginning to mine older landfills and extracting the recyclables. Once the old unlined landfill has been mined, we can install new liners and actually recycle old landfills into modern disposal facilities.”

Another idea — one that may not find popularity in the composting community — is to build a lined, sealed vessel within the landfill dedicated to organic waste, which Roberts calls a “biomodule.” “Instead of spending the time and money required to build and operate composting facilities, why not build these biomodules into landfills. It will speed the production of LFG, which can be efficiently collected and sold. When the gas runs out, air can be introduced to the biomodule, which is then mined for compost.” 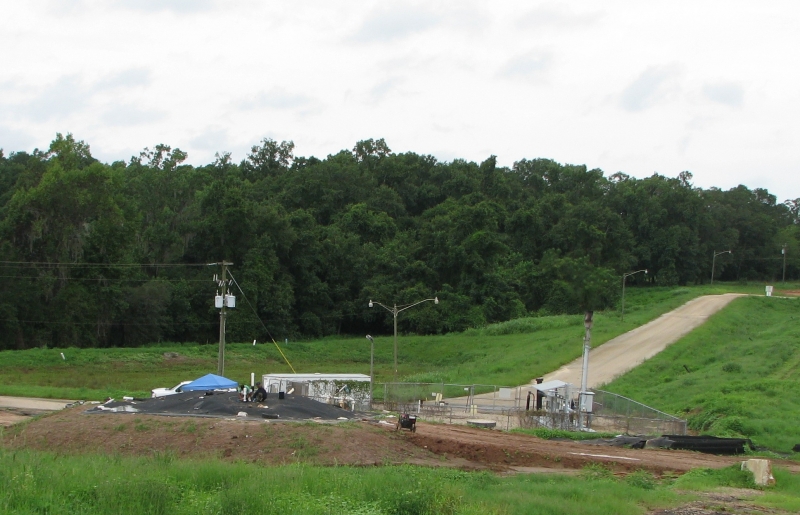 HDR is currently monitoring a pilot biomodule in a Leon County, Fla., landfill.

In Atlanta, HDR, Carlisle, Pa.-based Carlisle Energy Services and Republic Services Inc. recently collaborated on an innovative final cover for the Hickory Ridge landfill in Atlanta. First, Republic capped the 45-acre landfill with a geomembrane. “A geomembrane is easier to maintain than soil and plantings,” says Smith. “There is no grass to cut. You can find pinhole leaks and fix them quickly without removing a three-foot layer of soil, and there is no sediment to run off when it rains.”

Even better, the final cover generates revenue. Carlisle Energy Services has provided the 10 acres of flexible solar panels — 6,984 of them — that are adhered to the geo-membrane. The panels generate one megawatt of electricity. That’s enough power to energize 224 homes year round.

It’s just one of many ways that waste firms are shining new light on landfill design.