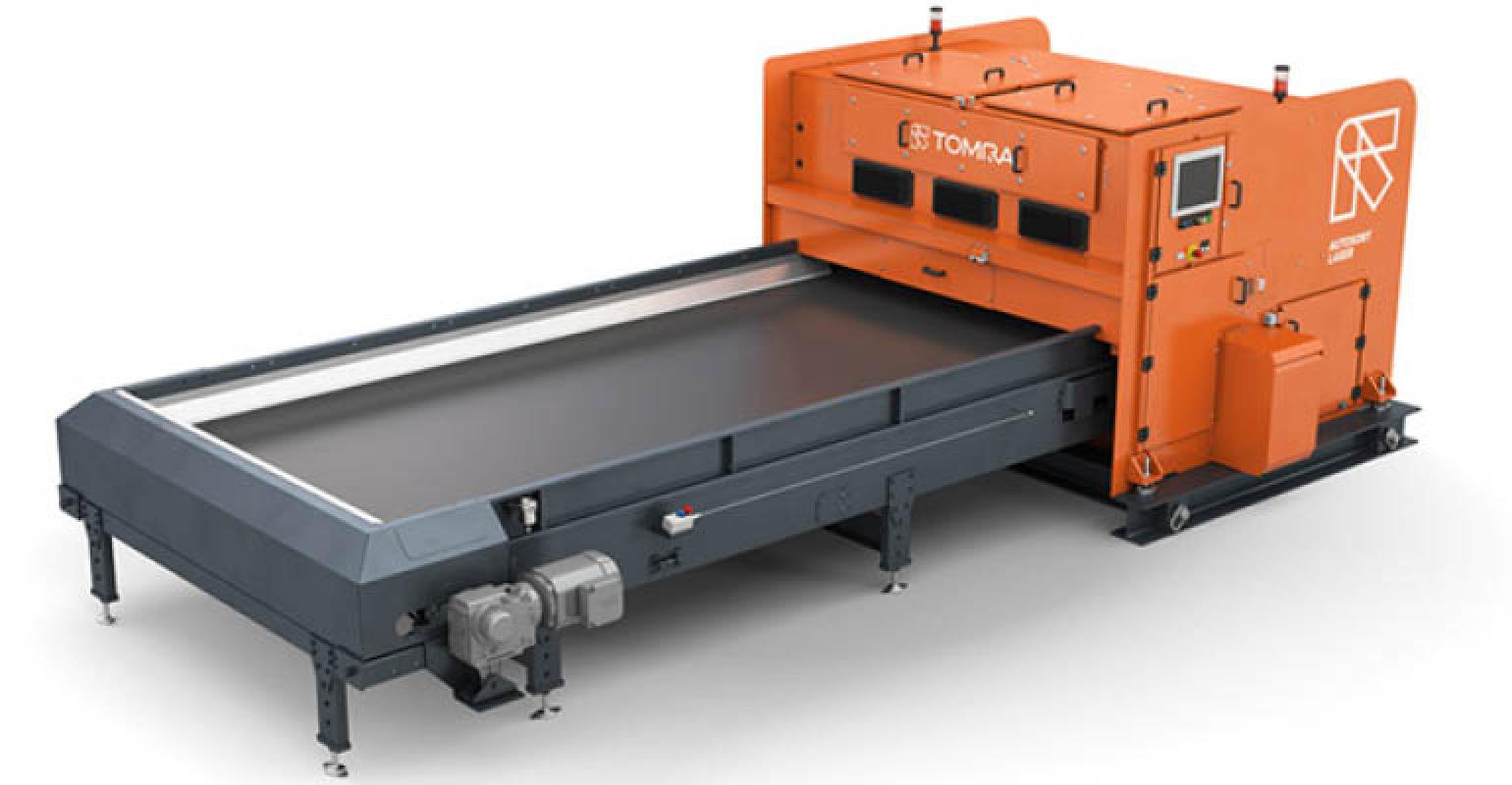 New screens, sorters and some robotic solutions all bring with them improvements in performance, less downtime and smoother operations for MRFs overall.

Some leading producers of equipment for material recovery facilities (MRFs) have all unveiled new products of late. New screens, sorters and some robotic solutions all bring with them improvements in performance, less downtime and smoother operations for MRFs overall.

Van Dyk Recycling Solutions has recently developed a screen that does not wrap with film, even after a full shift of operation. Called the Lubo Non-Wrapping 440 screen, the screen uses a larger style shaft and star to almost eliminate wrapping. The company says cleaning and maintenance time is reduced to less than 10 percent of that of traditional starscreens while the machine maintains peak performance throughout an entire shift. The new screen is available in widths up to 13.3 feet. The non-wrapping screen features prominently in Van Dyk’s new installations at FCC Environmental’s Dallas location, and the San Diego based SANCO facility. Van Dyk has also retrofitted the screen into existing systems, such as Stamford, Conn., based City Carting and Waste Connections of McKinney, Texas. The screen incurs no downtime and is easier to clean compared to traditional screens. All four locations report an average of about 10 minutes to 15 minutes in cleaning labor at the end of each shift, according to Van Dyk.

FCC Dallas’ volume of film bags runs at about 4 percent to 5 percent, which Van Dyk says is twice the national average. FCC has been fully operational since the beginning of the year, and the non-wrapping screen has kept up with the volume of film. FCC reports zero downtime due to screen wrapping. Similarly, since Waste Connections has installed the screen in early August, they have achieved their highest production shifts ever recorded.

Another new product is Bulk Handling Systems’ NRT ColorPlus-R, which uses an advanced image processing system to detect materials based on color analysis and object recognition. The unit has the ability to color analyze opaque objects, such as black plastics. All ColorPlus models employ transmissive detection, placing the material between the light source and the detection camera.

NRT In-Flight Sorting technology processes up to 50 million pixels per second and is able to detect and target each object in flight. In addition to transmissive detection, the ColorPlus-R has added a second LED light source above the material to facilitate reflective detection. Whereas opaque materials were before only recognized as objects, the ColorPlus-R’s simultaneous use of reflective and transmissive detection makes possible color analysis. In-Flight Sorting technology, also allow the equipment to auto-calibrate to maintain consistently high recovery rates while eliminating the time and hassle of manual calibration.

This latest iteration for MSS was designed specifically to handle auto shredder residue (ASR), electronic scrap, plastic flake and glass cullet applications. One of the most relevant new technical features of the MetalMiner is the patent pending MapLine algorithm.

“MapLine allows users to target specific metal types or objects by amplifying the sensitivity for non-ferrous metals, especially wire, while simultaneously reducing it for ferrous dust,” MSS Sales Director Felix Hottenstein said in a statement. “MetalMiner™ is exceeding our customers’ expectations. We’ve found up to 15 percent higher recovery rates for Zurik when directly compared to other vendors.”

The MetalMiner is manufactured up 112″/2800mm wide as either a stand-alone model in a conveyor configuration or it can be integrated as an upgrade to the MSS CIRRUS NIR and L-VIS Color optical sorters. Depending on the application, different induction coil configurations and spacings are available.

CP Group also has the CIRRUS FiberMax, which is running in both commercial paper recycling operations (recovering mixed paper and sorted office paper), and residential fiber operations (removing prohibitives and outthrows from newspaper and mixed paper). The TOMRA Group also has some new products on the market. In September, the company launched a sensor-based sorting machine based on laser technology.

The laser sorting technology is based on TOMRA’s near-infrared (NIR) and ultra-flexible Autosort series. Its Autosort Laser can detect many material properties at the same point simultaneously and therefore sorts material fractions. The company says its technology can excel at separating thin, thick or opaque glass.

There continue to also be developments on the use of advanced robotics at MRFs.

In late March, the Carton Council of North America joined forces with Alpine Waste & Recycling and AMP Robotics to test the use of artificial intelligence to improve the recycling of food and beverage cartons via a robot called AMP Cortex at Alpine Waste & Recycling’s Denver facility. Since then, the Carton Council and AMP Robotics have announced a second installation of the AMP Cortex robot at Dem-Con Companies’ Minnesota facility.

The AMP Cortex identifies, grabs and sorts food and beverage cartons from the recycling stream so that the items can be sent to recyclers and turned into new materials, such as tissues, paper towels and other paper materials, as well as sustainable building and construction materials. Once fully operational, the robot will be able to pick up 60 cartons per minute (or more), considerably more than a human’s average pickup rate of 40.

“We are constantly looking at innovative ways to maximize recycling, and the AMP Cortex is a perfect example,’’ said Bill Keegan, president of Dem-Con Companies, in a statement. “We were already recycling cartons recognizing their value; however, our method wasn’t as efficient as it could be. This system will assure we are sorting every carton.”

Other known installations include a partnership between ZenRobotics and Recon Services Inc., which have come together to bring the ZenRobotics Recycler from Finland to the U.S. The ZenRobotics Recycler, which is currently installed at Recon’s construction and demolition (C&D) recycling facility in the U.S., reclaims materials from waste via advanced machine learning technology, sorting materials like metal, wood and stone fractions.

BHS also has a robotic sorting technology. Its Max-AI technology is an artificial intelligence-powered sorter that identifies recyclables and other items for recovery, has two immediate solutions: the Max-AI Vision System and the Max-AI Autonomous Quality Control (AQC) unit. The vision system provides information, and the AQC unit adds a robotic sorter to pick out and place up to six different materials from the conveyor belt into sorting chutes.

It makes real-time prioritization decisions, and those priorities are adjustable as operational or market conditions change. It can make up to six sorts at one station, and separate like items. For example, NIR technology can identify and separate PET and even a color in one step, but the AQC will actually separate green PET, blue PET, PET trays, aluminum, mixed plastics and residue, leaving a clean stream of clear PET on the belt.

Max-AI is in operation at Athens Services’ MRF in Sun Valley, Calif., where it’s helping to identify and separate polyethylene terephthalate (PET), leaving a clean stream of clear PET on the conveyor belt.

Another will start-up at Penn Waste in October in a similar role and BHS has also announced a project for GreenWaste in San Jose that includes five Max-AI AQC units and six robotic sorters that create an autonomous container line. The AQC is set to debut in a fiber quality control role later this year.