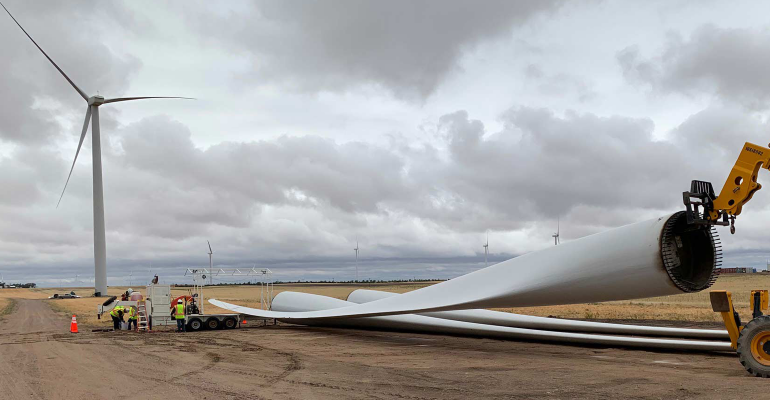 With growing demand for clean energy, more wind turbines are coming online, and the blades are getting bigger so they can create more power. While these systems save water, help address air pollution, and reduce sulfur dioxide emissions, and while most of the blade is recyclable, there are almost no commercial applications for them at the end of their lives. But Veolia North America and GE Renewable Energy have started recycling them for use in the cement-making process. GE Renewable Energy has signed a multi-year agreement to provide Veolia with old blades as they are replaced to upgrade turbine systems.

“The traditional path would be to recycle them into new blades, but we started looking at alternatives when we couldn’t do that, and we came up with the idea to use the chemical components of the blades. Most of their chemical composition could be used to make cement, with the two main materials being silica and calcium [used to manufacture fiberglass, which is much of the blade’s content],” explains Bob Cappadona, COO for Veolia North America’s (VNA) Environmental Solutions and Services division.

The silica and calcium become a part of the cement raw ingredients during the processing/manufacturing of cement.

About 65% of the blade is going into the cement and about 28% will be used as energy for the cement industry.

Following a pilot with material from GE Renewable, VNA began looking at how to scale up to make product that would work for kilns.

The process starts by cutting the blade to a more manageable size, then shredding to smaller pieces that can be transported to VNA’s Missouri plant where they are further shred to a fine material to meet kiln specs. The end product has the same properties and equal performance to traditionally manufactured cement.

VNA and GE Renewable say the product they have partnered to produce is used by cement manufacturers around the U.S., but can’t say which ones at this time, nor would they say if these manufacturers are paying for the product. But they stated that by the end of 2020, Veolia's processing center in Missouri had accepted several hundred wind turbine blades for recycling/repurposing.

GE Renewable provides the blades as it replaces them and other components of existing turbines.

“Wind power is an environmentally friendly source of renewable energy, and as we address global warming, the industry has grown, and to generate more power with the same land and footprint we build bigger turbines requiring larger blades,” says Michelle Simpson, Productivity and Technology leader for GE Renewable Energy Digital Services.

“Repowering the wind turbines and upgrading components allows us to make more power in a very low carbon way. But we have to replace the blades, and the question becomes, what do we do with them? That’s where Veolia comes in,” she says.

An analysis by Quantis U.S. found that using recycled blades in cement kiln co-processing results in a 27% net reduction in CO2 emissions and a 13% net reduction in water consumption over traditional cement manufacturing processes.

And recycling one seven-ton wind turbine blade enables a cement kiln to avoid the potential consumption of nearly 5 tons of coal, 2.7 tons of silica, 1.9 tons of limestone, and almost a ton of other raw materials.

These fiberglass blades are light and strong so they can fly in the wind for about 20 years. But they have only so many end-of-life options, mainly in the construction, aerospace, and maritime industries.

While about 85% of turbine blades are recoverable according to the industry, they are rarely recycled. Though scientists and the wind power industry are exploring innovative ways to do so, including incorporating them into pedestrian bridges, playground equipment, benches, and highway sound barriers.

And a few startups are working to try and break down the blades and incorporate them into decking, insulation, railroad ties, pallets, particle boards, and cars.

Georgia Institute of Technology and Queen’s University Belfast are prototyping a means to reuse old blades in buildings, infrastructure, landscape, and public art.

VNA and GE Renewables are among the first to actually commercialize a product from decommissioned blades.

The partnership enables VNA to build on its previous work supplying repurposed engineered materials to the cement industry. GE says it will be able to recycle most of its blades that are replaced during repowering projects. And cement manufacturers who buy into this alternative material will be able to make a greener cement.