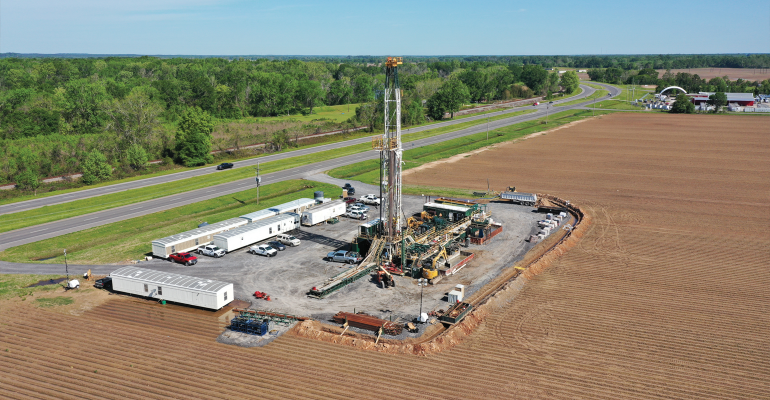 Project developer Strategic Biofuels is using feedstock from southern yellow pine waste to generate a renewable diesel that serve as a drop-in fuel in trucks. The production process begins with gasification to convert the forestry waste to carbon monoxide.

Project developer Strategic Biofuels has created a liquid fuel with a -278 carbon intensity, which it attests is likely the lowest of any liquid fuel in the world. Main ingredients in the “secret sauce” are the feedstock – forestry waste – and carbon capture and sequestration methodologies. Carbon sequestration is what most drives down that footprint.

There are multiple, complex steps, but at high level, Paul Schubert, CEO of Strategic Biofuels explains: “We capture carbon dioxide (CO2) produced in the process of converting waste wood to clean, renewable fuel. And we will inject that CO2 about a mile underground where it will be trapped forever via deep well injection.”

The Columbia, LA-based company will make two products from a Louisiana-based plant to launch in a few years: renewable diesel that can serve as a drop-in fuel in trucks and renewable naphtha to blend into gasoline to lower its carbon footprint.

The feedstock, primarily waste from southern yellow pine used to make lumber, is plentiful in much of the Southeastern part of the country where Schubert will set up shop.

“About 500 to 700 seedlings of pine are planted in that region per acre, [every 30-35 years], and to grow to lumber size, trees must be [periodically] thinned, as they compete for sun, water, and nutrients.  So whole rows are taken out to [eventually] get down to 80 to 100 trees per acre,” he says.

The pulp and paper industry once used a lot of the resulting forestry waste, but demand dramatically declined after two Louisiana-area pulp mills that took four million tons a year closed.

“So, most is left to rot in the woods, but it’s of value to us. We will use about one million tons of it a year to make liquid fuel,” Schubert says.

The multistep production process begins with gasification that converts forestry waste to carbon monoxide (CO) and hydrogen (syngas) and generates CO2 as a byproduct. The syngas is cleaned of contaminants, and the removed CO2 will be sequestered underground.

The CO and hydrogen are combined through a Fischer–Tropsch conversion process that produces paraffin oil and wax. They are fed to a hydrocarbon upgrading system where they are converted to the renewable diesel and renewable naphtha.

Deep well injection is the biggest contributor to the intensely carbon negative footprint. Strategic Biofuels will leverage a new U.S.  Environmental Protection Agency (EPA) class of wells [class 6] that come with stringent criteria, including placing the CO2 thousands of feet below drinking water aquifers; ensuring an impervious containment layer of rock that CO2 can’t rise above or pass through; and ensuring operations remain significantly below fracking pressure to avoid negative impacts on the surrounding environment.

In California where the fuel will be sold, regulations add another layer of protection. The state requires both upper and lower containment zones to “sandwich” the CO2, mitigating leakage.

Developing a product that qualified for government financial incentives was key to making the economics work. The fuel itself will generate only10% of the revenue; the rest could come from carbon credits under California’s Low-carbon Fuel Standard, the federal government’s Renewable Fuel Standard program, a blending tax, and an IRS tax credit.

The IRS 45 Q tax credit is a weighty part of the equation. It applies specifically to the amount of CO2 sequestered—$50 for every ton placed underground.  Schubert says the project will entail injecting a million tons a year.

“We drilled a $5 million test well to prove out the process and carbon footprint before we did the engineering in order to derisk the economics.

We’ve done every test you can to ensure CO2 goes in, never comes out, and meets U.S. Environmental Protection Agency and California Air Resources Board requirements for sequestration,” Schubert says.

The test well program verified details from the presence of geologic zones required for sequestration, to presence of an injection zone and its capacity to accept and permanently trap CO2.

Strategic Biofuels has a nondisclosure agreement with what Schubert describes as one of the two largest truck stop operators in the country, who will buy credits and fuel, move the fuel to California to sell it, and trade the credits.

The company is also negotiating over sale of the IRS 45 Q credits with a tax equity investor who would own a portion of the plant involved in sequestration and claim the credits.

Schubert expects to have secured financing and to start building the plant in the spring of 2023 with plans for a 31-month construction schedule.

Canadian-based Hatch will deliver the front-end engineering design for the facility and support advancement of engineering, procurement, and operational readiness during subsequent project delivery phases.

Says Pauli Baumann, director of Energy Technologies, Hatch: “The Louisiana Green Fuels project is in the vanguard of an emerging industry for the production of low-carbon fuels and chemicals. The various sub-parts of these new facilities, such as biomass gasification and Fischer-Tropsch fuel synthesis, are well known but require careful and disciplined attention to their integration,” he says.

“Our diverse teams have combined vast engineering and business knowledge to develop novel approaches across all these essential elements, paving the way for similar future ventures.”

“Net carbon zero for the transportation fuel volumes needed for heavy haul trucks and aviation cannot be reached from the used cooking oil, animal fats, and soybean oil used for renewable fuel today. However, by blending these lower, but positive- carbon footprint fuels with deeply negative fuels from a plant like Louisiana Green Fuels, net carbon zero is a real possibility.”