Landfills Leading the Charge, Not Trailing the Pack, on Reducing Greenhouse Gas Emissions

Peter Anderson says he wants to do triage on greenhouse gas emissions in the United States, but in his rambling haste to perform surgery on landfills he offers an inaccurate diagnosis.

So let’s perform an actual triage. The waste and recycling industry realizes that landfills are a source of methane.  We continue to work tirelessly to build on decades of innovations that have dramatically reduced those emissions while also adding valuable production to our country’s renewable energy portfolio.

In fact, landfills are among the best performers in methane reductions since the EPA began tracking this data in 1990.

FACT:  Methane emissions from landfill facilities have dropped significantly since 1990—by 30.4 percent, based on data from 2012.[1] This is easily the largest decrease among the top three emission sources (enteric fermentation emissions and natural gas systems are the others), dropping landfills to the bottom of that list. Stellar reduction rates in the U.S. can be directly tied to regulations and renewable energy production. The Environmental Protection Agency’s (EPA) Landfill Methane Outreach Program (LMOP) tracks 638 landfill gas beneficial use projects nationwide—including almost all of the large facilities Anderson references—as of August 2014, capturing enough methane to produce nearly 2,000 MW of renewable energy. 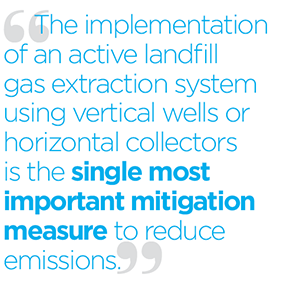 Claiming that landfills are “largely ignored” by regulatory bodies is patently false. New Source Performance Standards and other regulations make the industry far more effective in reducing methane emissions than unregulated facilities in other parts of the world.

FACT:  Scientific review by bodies including the Intergovernmental Panel on Climate Change (IPCC) overwhelmingly supports a high success rate for capture of landfill emissions. Mr. Anderson selectively presents IPCC data in a way that misrepresents American landfills. In fact, the report states “the implementation of an active landfill gas extraction system using vertical wells or horizontal collectors is the single most important mitigation measure to reduce emissions.” This recommendation is already widely practiced in the U.S.

EPA acknowledges that the waste industry has been successful in lowering methane emissions. Mr. Anderson selectively uses the IPCC’s reference to a citation of only 20 percent emissions recovery. However, he does not mention that the same report also includes a 90 percent capture rate, betraying his bias against landfills. The 20 percent data point represents the realities at uncovered facilities in other parts of the world and is not representative of landfill management practices in the United States. As noted by a 2010 Columbia University study citing that very same IPCC report:

“This 90% capture rate is based on intensive field studies of the methane mass balance at landfills…while the 20% value estimated for the low-end capture is only an estimate…It can be clearly seen that the 20% value suggested by IPCC, and misquoted by the landfill opponents, is neither representative of nor reasonable to ascribe to U.S. landfills.”[2]

In the U.S., landfills are highly regulated, highly engineered facilities that remain a crucial component in the spectrum of waste management options, along with recycling and composting.

FACT:  Recycling and composting have not been left on the “cutting room floor.” Our industry remains steadfastly dedicated to these practices. To quote the EPA, these factors have “more than offset the additional CH4 emissions resulting from an increase in the amount of municipal solid waste landfilled.”[3]

These factors and accelerating innovation are helping landfills lead the charge in reducing methane emissions. Landfills will rightfully remain an important part of responsible waste management yielding significant resource recovery and energy generation. These are the facts. The climate change conversation in our country is too often marred by skepticism of the facts. We should all do our part to represent data factually, in context and in good faith, understanding that greenhouse gas reduction and the preservation of our planet are shared goals among all of us.