A new report which estimates that Americans are disposing of more than double the amount of waste in landfills than data estimated by the U.S. Environmental Protection Agency (EPA) is in step with the recent Environmental Research and Education Foundation (EREF) study, the group’s president says. 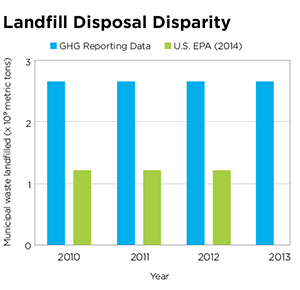 The Yale study supports the EREF report on recycling discussed earlier this month at the Waste360 Recycling Summit, which stated that both the amount of waste generated and the tonnage of recyclables processed is significantly higher than estimates by the EPA.

Bryan Staley, president and CEO of Raleigh, N.C.-based EREF, also says in an interview that Biocycle’s most recent State of Garbage report further corroborates the disparities from the traditional EPA data.

“All three data sets in essence show that the EPA grossly underestimates landfill tonnage and overall waste generation in general,” he says.

Here are 12 things to know about the report.