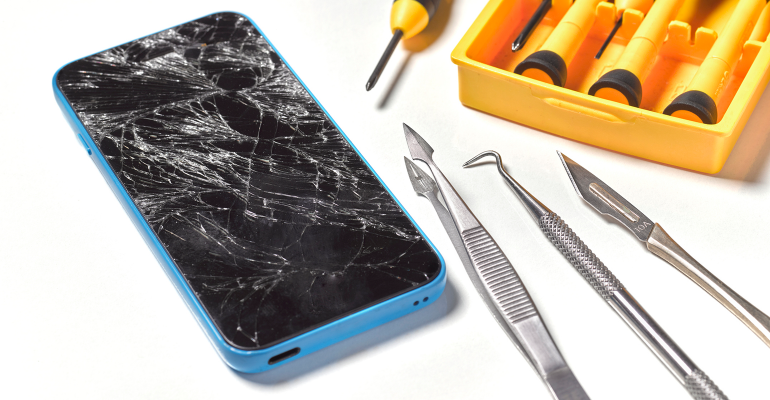 Increasingly, electronics manufacturers are designing devices in ways that make them painfully hard if not impossible to repair, exasperating a fast-growing e-waste problem. Today 53.6 million tons of e-waste are generated a year, causing fires at waste and recycling facilities when they contain lithium-ion batteries as well as releasing toxins into groundwater and taxing the environment in other ways.

A movement called Right to Repair is working to reverse that trend by pushing for repair-friendly laws, and it’s gaining ground around the world. In the U.S., iFixit is among those advocating for change industrywide and teaching repairers, consumers, and waste and recycling pros how to fix electronics. The company recently shared what’s happening to try and make repair the norm at a webinar hosted by e-Stewards, who has a certification program for electronic waste. They talked about why the push for change, and why repair should trump recycling. They called out some majors in the electronics manufacturing space for their practices. And they highlighted a slew of recent legislative activity around the issues.

Speakers were Kyle Wiens, CEO of iFixit and leader of the Right to Repair Campaign; Kerry Sheehan, U.S. Policy director and Right to Repair advocate at iFixit; and Elizabeth Chamberlain, director of Sustainability for iFixit. Here’s what they had to say:

Wiens started off: “We have a vision where things are fixable, but this is not the direction we are heading in.

The goal is to move away from a linear economy where we dig things out of the ground, make stuff out of them, use them for a little while, then toss them. How do we turn that into something that’s more circular where we are more efficient with resources?

“Recycling is great, but we fall short when we stop with this method to manage end-of-life products.”

The main arguments:  rare earth (metals) are not recovered at scale, plus recycling is more energy intensive.

“Even if there were perfect materials recovery and recycling, when you grind and shape electronics you waste energy, while repair keeps much of the energy embodied in the device. Recycling should be the last resort,” Chamberlain said.

Not to mention recyclers would have to figure out how to quickly break down a massively and quick-accumulating pileup. But it’s not an easy endeavor.

“They can’t fuss with weird screws, and more electronics have proprietary screws that make it harder to get inside so you will buy a new device or come to manufacturers for repairs. More manufacturers are doing this now,” Chamberlain said.

Apple/MacBooks use these screws as does every iPhone since the iPhone 4. iFixit had a look at several specific products and found more than “weird screws.”

For instance, the ultrathin new iMac contains less materials than its predecessors, reducing waste, but when the team took it apart, they found problems. The fans wear out over time and Apple does not have a plan to replace them. But those fans could be repairable along with the USB ports, headphone jacks, and other parts.

Microsoft Surface laptop is even more problematic according to Wiens. “It’s not meant to be opened or repaired without causing damage. When we popped it open we found no screws. The whole unit was glued together,” he said, making extracting the battery near impossible, and this has become a trend.

Since late 2012 all MacBook Pros have glued in batteries. Apple and others are gluing in keyboards, speakers, and other components as well.

Consumers seem to care about how fixable electronics are when they are made aware of the problems, at least in France, who mandates labeling products with repair scores. Samsung did a consumer survey in that country and found: 86% of respondents said the index impacts their purchasing decisions; 80% would give up their favorite brand for a more repairable one; and 83% said they would try to fix their devices themselves or have faulty devices repaired by a professional.

And repair generates good business, according to what research has been done. Landfilling creates less than one job; recycling 15, and reuse creates 200 jobs, according to iFix it, who calls on recyclers to tap into opportunities.

“Recycling facilities are full of people who know how electronics work,  and there’s no reason why they can’t do more repair. A lot of electronics that come through recyclers doors would be worth more to both recyclers and the planet if they spent … repair time instead of just running those things through a shredder,” Chamberlain said, citing as an example Homeboy, national recyclers who say that most of their revenue comes from their repair arm.

But there’s plenty more work to do to make that possible.

“Governments around the world are beginning to respond,” she said.

Besides France’s label mandates around repairability, the European Parliament voted for mandatory labeling on an EU-wide scale. Australia and Canada have been active too, as has been the U.S.

Massachusetts established an auto Right to Repair law (by 87.7% vote), which sparked a national movement to expand similar legislation into other markets, including consumer devices.

In 2021 alone, 27 states introduced Right to Repair laws requiring manufacturers to provide access to consumers and independent repairers to parts, tools, and information that they provide their own brand repairers.

On a federal front, a Right to Repair bill was just introduced in Congress.

And the U.S. Federal Trade Commission (FTC) has been taking action, such as prohibiting manufacturers from voiding warranties when a consumer or independent repairer opens and fixes a device, which is a practice that goes on now.

The agency produced a report supporting Right to Repair, finding no basis for repair restrictions, Sheehan said, and she anticipates its work will be ongoing. President Joe Biden issued an executive order urging the FTC to move quickly to take action against repair restrictions.

For now, the issues are ongoing with battery fires among the greatest concern for the waste and recycling industry, and they’re on the rise at their facilities, which happens when devices go through shredders.

Fire Rover who sells fire suppression systems to recycling facilities reports over 300 recycling facility fires in each of the last three years in the U.S. and Canada and based on the pattern anticipates an increase, largely due to lithium-ion batteries.

“Not only are these fires dangerous and expensive for recycling facilities, they’re also an environmental horror. When a shredder goes up in flames all those toxic materials are released into the air,” Chamberlain says.

Without Right to Repair legislation it will be increasingly difficult for recyclers to offer this service and safely manage recycling argues iFixit.

“We can’t trust manufacturers to do the right thing. The environment needs a watchdog and that’s why we are pushing so hard for this legislation,” Chamberlain says.