As a Novel Approach to E-Waste, Two Firms Refurbish and Sell Old Wares on eBay 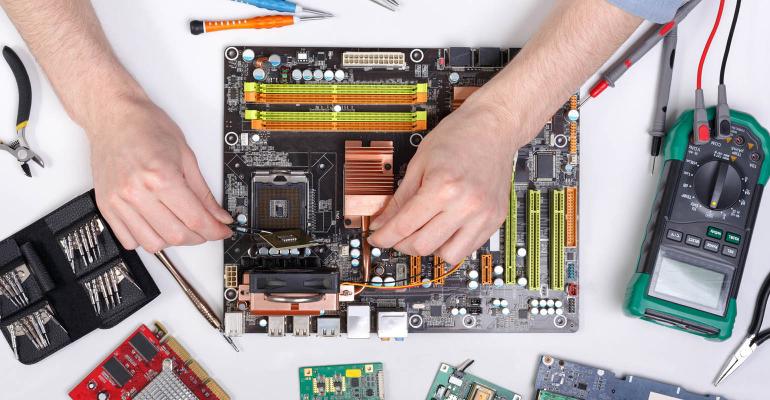 Online electronic recycling retailers have found a way to both capture some of this equipment before it hits the landfill and make a profit at the same time.

With technology advancing at a quicker pace, many devices and equipment are becoming outdated sooner than expected. Because of this, the amount of e-waste being generated also is climbing faster.

According to the most recent reports from the U.S. EPA, the country generated 11.7 million tons of e-waste in 2014, while the electronics recycling rate was recorded at 29 percent.

To combat the rapid increase in e-waste, online electronic recycling retailers have found a way to both capture some of this equipment before it hits the landfill and make a profit at the same time.

“We quickly realized that the quality of materials we were collecting was good enough, that we invested in proper staffing and testing so that the materials could be sold as a turnkey and ready to go,” says Cardona-Nelson. “Discovering that eBay is a marketplace that went beyond border and that the online retail was destined to explode, we realized that the best marketplace was literally at our fingertips.”

Corporations donate their used technology equipment instead of disposing of it. The two companies wipe information from the equipment and refurbish it before it is listed for sale on the eBay online marketplace.

“Ultimately, our business is centralized around being a conduit for large businesses to donate their used electronics and utilize them to make an impact in both the environment and the community in a positive way,” he says. “We keep things out of landfills while providing data destruction and a way to dispose of electronics.”

In business for more than nine years, eWaste Direct has grown to address the demand of the market.

“As a result we increased the size of our warehouse, our fleet and we have double our staff. We went from 80 percent recycling to 80 percent resell revenue,” says Cardona-Nelson. “In almost 10 years of business, our company has nearly grown tenfold. The demand is increasing due to wide spread awareness for sustainable goods. As this awareness grows so does the opportunities to scale our growth.”

Revive IT has experienced the same type of growth since its founding in 2007.

“We have spent a lot of time developing a new production process. Once we did that, we were able to go out and get a bigger supply,” says Ko. “We grew through offering more and more product offerings. Now we offer computer models, Apple products and tablets along with the desktops and laptops that we had initially started out with…. I would say on average it’s growing about 30 to 40 percent every year. eBay, which we sell on, also noted that refurbished electronic listings are up 30 percent year-over-year on the platform.”

While eWaste Direct continues to focus and refine its model to address the demand on the commercial and corporate market, Revive IT accepts donated electronics from individuals as well by allowing them to be dropped off at its locations in Chandler and Mason Ariz., and Memphis, Tenn.

Both companies accept most electronics and information technology (IT) assets, but neither accepts large appliances. Revive IT is a certified re-furbisher, in addition to being NAID AAA certified. In every computer they accept, the RAM and hard drive are removed and the loose hard drive is wiped of all data.

“This guarantees that all products are wiped before they get rebuilt and sold or donated again. We clean it completely and build it out into another computer entirely, customized to the customer’s wants, so it is essentially a brand-new computer,” says Ko. “We test our products thoroughly before they are sent, and we give a one-year warranty, which is better than the warranty offered by most companies for brand new computers.”

Meanwhile, eWaste Direct uses a combination of software for remarketable drives and a demanufacturing process for physical destruction.

“We are proud of reusing as much materials as we can, from our furniture, our office supplies, computer equipment all the way to our packing supplies,” says Cardona-Nelson. “We want to lead by example and show that sustainable business is not only here to stay but it is a big part of the future.”