May 2019 Updated Fire Report: A Sit Down with the Doctor of E-scrap 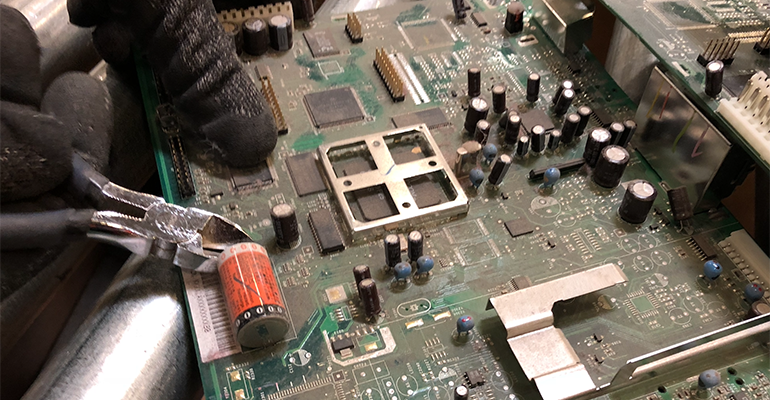 Fire Rover’s Ryan Fogelman sits down with Rafael Reveles, a 20-year e-scrap veteran, who Fogelman has named the doctor of e-scrap.

During the past 12 months, the waste and recycling industry experienced 327 reported facility fires in both the U.S. and Canada. Based on reasonable assumptions, we can extrapolate that 1,800-plus facility ﬁres have occurred during that time, which, based on the number of facilities reported by the Environmental Research & Education Foundation, is more than 40 percent of the industry. 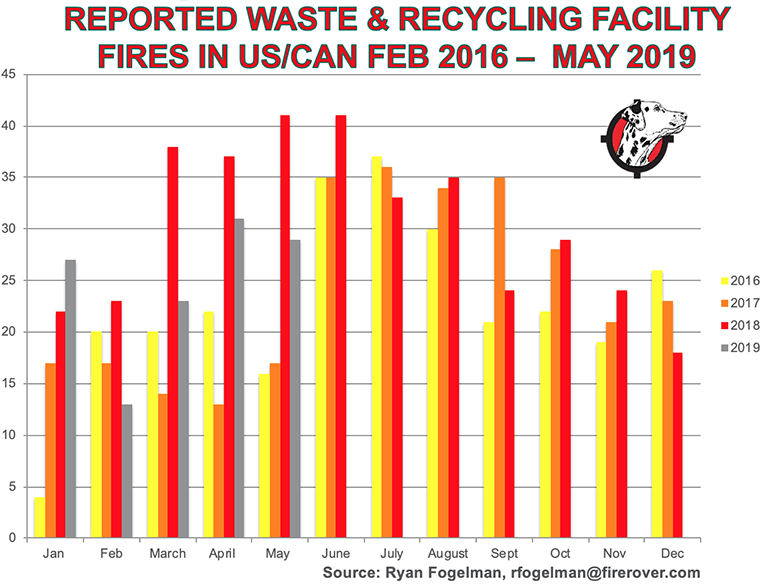 The positive news is that as we move toward the summertime spike of fires, we are seeing fire incidents lower than in 2018, but there is still an increase in reported fire incidents as compared to 2016 and 2017 numbers.

The fire hazards I typically see in the waste and recycling industry range from traditional material hazards such as pressurized tanks, equipment, chemicals, hot work activities, hazmat and smoking to newer hazards like lithium-ion batteries. 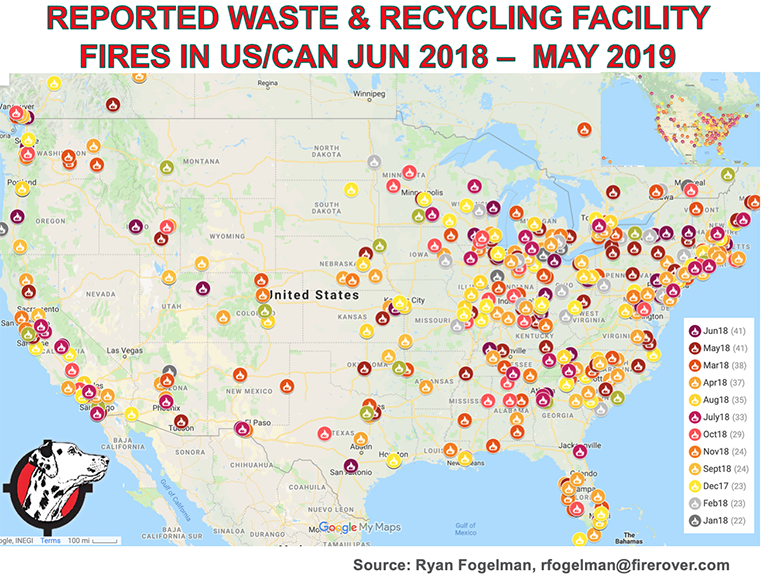 In my position at Fire Rover, I have had the unique pleasure of working with experts across the waste and recycling industry. I met Rafael Reveles, a 20-year electronic scrap (e-scrap) veteran who I refer to as the doctor of e-scrap, a few years back as he was researching fire protection options for his clients. Fast forward to today and our solution is protecting both small and large operations from the threat of fire hazards.

Why did I give Reveles the nickname the doctor of e-scrap? In the practice of medicine, doctors analyze and treat symptoms of illnesses in order to find innovative and effective treatments. Similarly, over Reveles’ career, he has been analyzing the symptoms encountered during the complex and ever-changing recycling of electronics. He has and continues to develop innovative solutions to not only treat the issues but come up with solutions that help evolve the entire process from a safety and efficiency perspective. I hope you find our discussion informative.

Ryan Fogelman: Why are lithium-ion batteries even more of an issue in an e-scrap plant than other types of recyclers?

Rafael Reveles: More and more electronics are fitted with lithium-ion batteries due to their superior energy storage capacity and relatively low cost. These batteries have many different form factors and can easily be missed in a sea of electronics being de-manufactured by temporary or high-turnover workers. Some devices may even have several batteries throwing people off the trail who may have already removed only one of them. Others may not be familiar if a battery is in a device or aware of the location. Many of these devices are also at their end of life and may have been mistreated or stressed, which could result in a damaged battery prone to thermal runaway.

As batteries are concentrated together for shipping, the fire danger to the facility grows since a small error in isolating the leads of a battery or one with a lithium dendrite formation defect can lead to a short and result in a tremendous exothermic energy release sustained by a flammable electrolyte that produces its own oxygen when on fire. To make matters worse, toxic gases containing fluorine are produced during combustion of lithium-ion products and are a risk to employees and first responders exposed to the smoke.

Ryan Fogelman: How can a facility be better prepared?

Rafael Reveles: Besides the engineering controls we will discuss later, there are many common sense best practices that can be implemented quickly to reduce the risk. Step one is to develop a plan. If a fire happened, where would it be? How would it be extinguished quickly? And with what measures? Start by reviewing how many batteries will be stored once removed and their location. Set storage standards for flammable materials and apply fire breaks to both palletized and pile storage of e-scrap or flammable commodities. Set up a quality-control program for isolating the removed batteries effectively and pulling any out that are severely damaged and handling those with extra care. Use caution when handling e-scrap still containing batteries and avoid rough handling such as front loaders that can pinch and short out contained batteries, which I have seen happen firsthand. Consider inviting first responders to your facility for a tour and solicit their feedback. These best practices only have value if staff are trained regularly and management shows commitment to undertake the measures.

Ryan Fogelman: Beyond fire extinguishers, what can be done to control these types of fires?

Rafael Reveles: An economical solution is to have water or large capacity extinguishers available in proximity to where these types of fires may occur. Even though the batteries do have a small amount of lithium in them, water or conventional extinguishers can make a difference when applied.

An even better investment is a portable compressed air foam system (CAFS) cart. These systems often use compressed air or nitrogen to make a foam from water and a special cooling agent. The foam produced can be up to 20 times the volume of the tank and reach distances of over 90 feet. The foaming solution concentrate also acts as a wetting agent that rapidly cools the material on fire and promotes surface sealing to reduce vapor from emitting and burning. In the case of a pile or stack of boxes being on fire and far from access, the CAFS systems are very effective at reaching the affected area.

Besides extinguishment, early detection is critical and can be accomplished with high-density arrays of smoke detectors, multiple gas detection sensors, heat and infrared detectors and military-grade thermal video surveillance. If the fire starts to grow, such as when group of batteries are burning together, or the pile of involved material is large, or if there is any doubt in the ability to control the fire, act safely and call 911.

Ryan Fogelman: It's nice to have best practices and extinguishing options, but what happens when nobody is around to see the event happening?

Rafael Reveles: I am a believer in automation, from the shredding plant controls to the fire suppression systems. Early in my career, I experienced several shredder fires that were likely initiated by missed batteries. I quickly searched for flame sensors and implemented a way to have them initiate water delivery to the affected area. Today, there are even better sensors and automation methods to deliver both water and even CAFS foam to a conveyor, tipping floor or inside a shredder. There are two main approaches for automated systems: on the shred line covering multiple zones in high-risk areas or large area coverage systems such as the Fire Rover self-contained-based systems.

Ryan Fogelman: The electronics recycling landscape seems to change faster than other areas of recycling. How do you see changing technology affecting the fire problem?

Rafael Reveles: Electronics will continue to evolve quickly to meet the needs of consumers as they always have. I see two areas to watch in this regard: proliferation of even more lithium batteries short term and development of safer batteries and removal techniques over the longer horizon. With 5G and the industrial Internet of Things, we are in for a barrage of sensors and nodes literally everywhere. These sensors will enter the e-scrap value chain at their end of life and likely be challenging to disassemble. At the same time, safer chemistries of batteries or even new types may enter the market. From cars to planes, lithium-ion batteries and the fires they may cause are unwanted and should drive manufacturers to offer safer alternatives.

The well-covered topic of artificial intelligence (AI) will also enter the picture in the form of classification systems using machine vision to let e-scrap operators know exactly what has a battery and how to safely remove it. As cost and scale improve, AI can power de-manufacturing robots to efficiently remove these batteries and further reduce the fire risk. The future is bright, but we have a way to go and will experience more struggle first.

I sincerely appreciate Reveles’ time discussing his experiences and approaches to one of the most important initiatives we face in recycling e-scrap. As Reveles mentioned above, the supply and demand of lithium-ion batteries is going to continue to increase for the near future. One thing is certain, innovative solutions that decrease the number of major fire incidences in waste and recycling facilities are going to help the industry mitigate fire risk in their operations, which will work two major goals:

Rafael Reveles is an industry-leading recycling engineer and systems integrator with 20 years of extensive e-scrap operational and processing system experience.