The latest “pop the champagne” moment for Bellevue, Wash.-based Outerwall Inc. happened earlier this month when the company surpassed the 4 million mark in terms of the number cell phones, tablets, MP3 players and other electronic devices collected at its growing network of ecoATM kiosks.

Equally impressive is that the last time the company clinked glasses was just six months earlier in September for surpassing the 3 million mark with its automated device recycling kiosks, which rescue idle devices through a consumer friendly, cash-on-the-spot model at kiosks located in groceries, malls and big-box stores around the nation.

Through its 1,890 kiosks in 42 states, ecoATM is outpacing its online competitors—think Gazelle and uSell—and its own previous collection rate by two months.

“ecoATM is safe, fast and convenient way for consumers to go and recycle their e-waste,” says Randy Erman, director of product marketing at ecoATM, which was bought in 2014 by Outerwall and joined the automated family of Redbox and Coinstar. The company also experienced exponential growth in its collection capability by adding more than 1,000 kiosks last year. Texas has the most ecoATM kiosks, followed by Ohio, then California.

“We’ve basically made a mousetrap that incentivizes people to go into their junk drawers and find those old idle devices and bring them to one of our kiosks for instant cash,” he says. 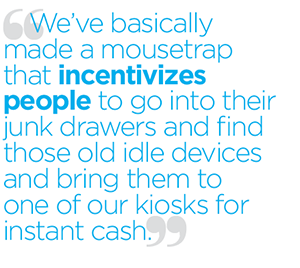 “The overarching theme here is extending the device lifecycle for a smartphone is good for the bottom line,” she says, adding that 33 percent of mobile users upgrade their phones annually. “When we talk to end users having an incentive of cash is a big driver and there is a small percentage of people who also have a green mindset and value sustainability.”

Pearce expects that by the end of 2015 there will be nearly 425 million idle or inactive mobile devices in the U.S., and of those, only about 100 million will be recycled.

What makes ecoATM unique is that it accepts phones of all shapes, sizes, colors, ages and conditions, without any of the haggling and awkwardness that could accompany a face-to-face transaction with a human, he says.

“We have a catalogue of every single phone that we have ever collected and we have over 5,500 devices in that catalog going all the way back to the old satellite phones and the old text pagers,” Erman says. “Any and all of those devices will get a quote. Our customers are going to walk away with … the knowledge that they have recycled their device in an environmentally sound way.”

Depending on the make, model and condition, consumers can get up to $400 for devices. Newer iPhones and Samsung devices in great condition fetch a higher dollar value than an MP3 player that is a few years old, for example.

Armored trucks collect the phones, just like with normal ATMs. All the devices come back to San Diego where they are processed and sorted. The company is able to find a second life for the majority of the devices it collects. For the remaining devices, ecoATM partners with certified e-waste reclamation facilities to ensure those materials are responsibly reused and recycled.

“We are an R2 certified recycler and what that means is that we are accountable for the phones after we purchase them and make sure that they’re either refurbished or torn down in an environmental way,” Erman says. “We work with a set of buyers to ensure that the precious materials are extracted so they can be reused and that phones that are in good enough shape can be repaired and refurbished. When they are refurbished, they are resold into the channel and that obviously has the biggest bang for the buck environmental wise.”