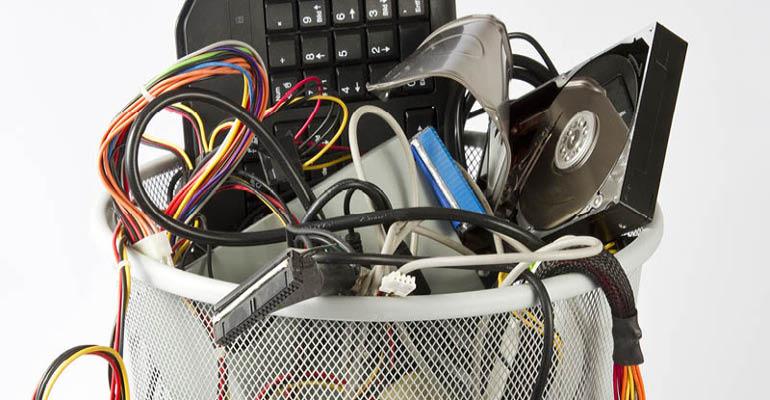 Samsung and waste management companies are facing the challenge of safely disposing or recycling the massive amount of e-waste caused by the recall.

In September, Samsung suspended sales of its newly released Galaxy Note7 smartphone and issued a recall after discovering a manufacturing defect in the phones’ batteries had caused the devices to overheat, resulting in dangerous fires and explosions. Now, Samsung and waste management companies are left with the challenge of safely disposing or recycling the massive amount of e-waste caused by the recall.

To date, more than 4.3 million Galaxy Note7 smartphones have been recalled. And Samsung is currently working on getting recalled devices into its possession by supplying kits that include safety gloves and multiple layers of fireproof boxes to retailers, customers and ground transportation companies to ensure safe shipment back to its warehouses. This effort is part of Samsung’s Recycling Direct program, which provides consumers with a number of smart ways to help make the world a better, cleaner place.

“The biggest challenge [for Samsung] is logistically getting back all of the affected phones. In normal recycling programs, they can be turned in using many routes, such as carrier programs, buyback programs (less frequently for phones) and municipal recycling programs,” says Jason Linnell, executive director for the National Center for Electronics Recycling. “If most [smartphones] are traded in through the carrier or directly back to the manufacturer, this challenge can be overcome.”

While some smartphones are still being collected from around the globe, Samsung is supposedly looking into recycling some of the phones’ components, which may include materials like gold, cobalt and cadmium. But the problem with this is that not all materials from smartphones can be recovered or recycled.

“If most [of the phones] are returned to the manufacturer or their recycling designee, there should be few issues. If the phones need to be destroyed, the recycler or recyclers getting these phones should be able to properly handle them,” says Linnell. “The challenge will be if the Galaxy Note7s appear in other collection or recycling facilities and no one identifies them as needing special processing or removing them from the reuse stream.”

“Without question, the battery within [the cell phone] is the primary concern, even for recyclers,” says Eugene Niuh, director of business development for Omnisource. “With the battery properly removed, the phone can be recycled as would any other smartphone. I am unaware of the percentage or levels of precious metals content, but I assume they are present and can be sent to a smelter accordingly. Certainly, a more sustainable solution may be to retain the phone until such time a tested replacement battery is available and the phone can be put back in service.”

One of the major waste and recycling companies dealing with the challenge of e-waste is Morristown, N.J.-based Covanta Holding Corp., which has its own e-waste business line entitled ECOvanta. With this initiative, Covanta is able to recycle more than 99 percent of the e-waste it receives.

"Proper recycling of used smartphones is extremely important as they include many valuable but also potentially hazardous elements,” says Paul Gilman, senior vice president and chief sustainability officer for Covanta. "Today's e-waste management standards cover everything from securing privacy to ensuring potentially hazardous materials in phones like mercury and arsenic don't enter the waste stream. Safely managing more than two million recalled devices is a gargantuan undertaking, and Samsung will have to establish rigorous processes for handling returned phones to avoid making a bad situation worse."

At this stage of the recall process, Niuh believes that the waste and recycling industry should work directly with the original equipment manufacturer (OEM) to establish proper recycling and handling procedures. He also believes that the OEM should select a small group of trusted recyclers to partner with during the recall process, if they haven’t already, because once the e-waste is in the hands of a recycler, further controls will likely be required to protect people and property in the event of an incident. Additionally, environment, health and safety risk assessments will be necessary for recyclers looking to process the e-waste.

In addition to the e-waste management issues, safety concerns are also on the rise. Just last month, the U.S. Department of Transportation, the Federal Aviation Administration and the Pipeline and Hazardous Materials Safety Administration issued an emergency order to ban all Samsung Galaxy Note7 smartphones from air transportation in the U.S. following the recall and a Note7 fire on a Southwest flight in October.

“We recognize that banning these phones from airlines will inconvenience some passengers, but the safety of all those aboard an aircraft must take priority,” said Transportation Secretary Anthony Foxx in a press release. “We are taking this additional step because even one fire incident inflight poses a high risk of severe personal injury and puts many lives at risk.”

Despite all the challenges that the Galaxy Note7 has caused, Linnell claims there could be some benefits from the recall. “It will be interesting to see if Samsung can do something beneficial like extract components for reuse in other phones they make or get them back into the refurbishment market,” he comments.

Samsung has yet to confirm how the Galaxy Note7 smartphones overheated, but the company is expected to sell refurbished versions of the cell phone at some point next year, according to The Investor. Additionally, Samsung has issued a recall of certain top-load washers manufactured between March 2011 and current production dates.