When Things Fall Apart: Waste in the Wake of Disaster

Cleanups after three of the last decade&rsquo;s biggest disasters illustrate that best way to pick up the pieces is to have a plan in place before the worst occurs. 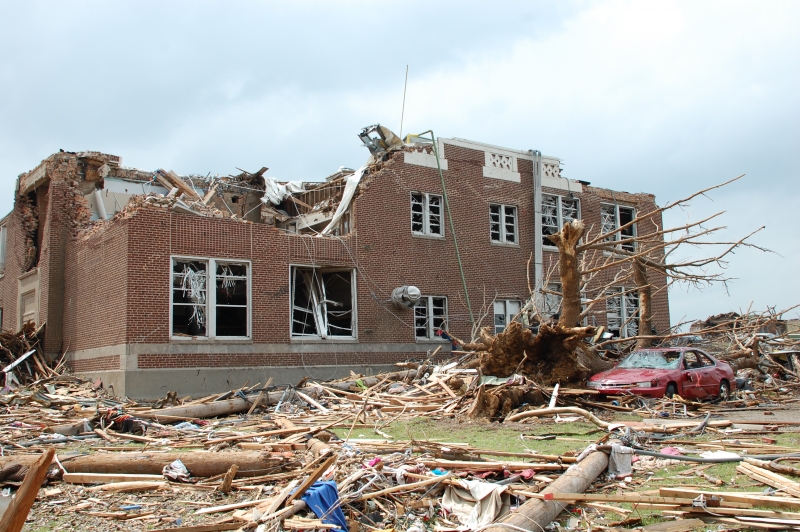 Every disaster is unique. There are common issues that are instructive for every city or company dealing with the waste management component of a tragedy, natural or man-made. But each event is a separate story.

The following is a look at three of the highest profile disasters in the United States in the past decade: The tornado that hit Joplin, Mo., in 2011, Hurricane Katrina’s ravaging of New Orleans in 2005 and the Sept. 11 terrorist attack on the Pentagon in 2001. Waste officials talk about what they learned and offer hints about how to be as ready as possible when the unexpected arrives.

Joplin is a town of about 50,000 in southwest Missouri. Route 66 runs through it. Bonnie and Clyde spent time there. And on May 22 of 2011, an EF5 tornado, the strongest category of twisters, came to town, leaving 160 casualties and more than $2 billion in property damage in its wake.

The city was not completely unprepared according to Tim Nyander, public works operations manager for Joplin. Officials had recent experience dealing with two ice and two wind storms. “We were prepared for a big one, but nothing like what we got,” says Nyander.

Joplin was experienced with vegetative debris (trees, shrubs and other woody plants uprooted in the storm), but the aftermath of this tornado involved a lot of construction and demolition (C&D) debris and white goods — and a sizable volume of trash in general. All told, Nyander says the tornado generated 3 million cubic yards of waste. 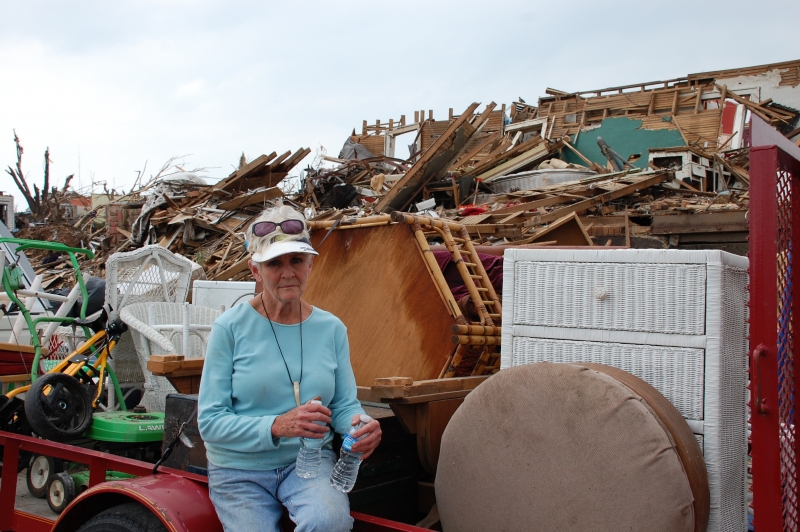 A week after the tornado hit, Joplin officials instructed residents to separate their debris and place it on the curb. The U.S. Environmental Protection Agency (EPA) came in with a contractor to pick up the separated waste and take it to a staging area where it was prepared for recycling or disposal, separating materials like food and Freon.

“There was a lot more that could have been recycled,” Nyander says, but they were facing a deadline from the Federal Emergency Management Agency (FEMA) for maximum reimbursement. Up until Aug. 7 FEMA would pay 90 percent; after that date the amount fell to 75 percent.

And contrary to his experiences following other disasters, Nyander says the EPA actually generated local revenue: The agency made $46,000 selling white goods to a Joplin-based company. 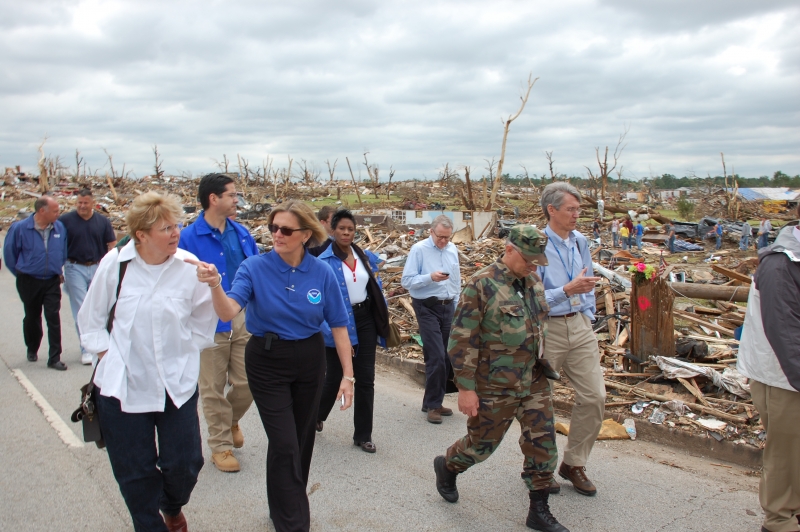 One of the biggest challenges for the Joplin workers was clearing roads of debris. In the first 10 hours they cleared a single lane to allow for emergency vehicles. In the next 24 hours they staged their equipment in three locations to assist with search and rescue. “The emergency crews wanted us to hold off moving or removing debris while they continued to search for victims,” he says.

During the first three days the crews went curb-to-curb clearing debris and restoring the right of way, hauling away 980 dump truck loads of material. “We’re proud we got it done in 72 hours,” he says.

They also had to deal with “scrappers” (people collecting scrap for resale) and looters. Police handled that issue initially. “Farther in, we allowed scrappers along the right of ways,” he says.

The scale of the human element of the tragedy was a unique challenge for the workers. Many people were unaccounted for. Nyander says they spent three weeks on search and rescue before being able to really devote the department’s full resources to clean up. “It was something we hadn’t thought about.”

And it’s something the workers had to handle with sensitivity. “You’re dealing with people that just went through a traumatic event. We needed to be supportive of that,” he says.

Planning is a big part of Nyander’s advice. “Preparation is the key. We did a pretty good job given the circumstances.” One advantage of Joplin’s multiple experiences with disasters is that they now have an emergency operations center. 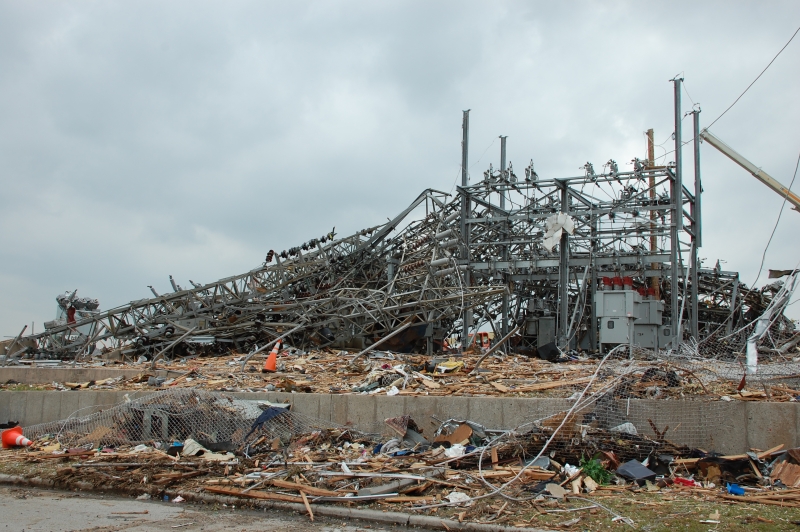 He suggests waste handlers formalize and keep current the list of facilities that can be used — transfer stations, recycling facilities, hazardous waste centers. “We need to have good documentation of facilities on hand,” says Nyander. “Take notes on the cleanup. Document what you do.”

A smaller city of course has its own challenges. Nyander that there were 110 sister crews from adjacent jurisdictions that came to help when the call went out for assistance, and that they were “a saving grace.” Joplin didn’t have to rely on formal mutual aid agreements.

The cleanup still isn’t complete, however. Officials continue to process the remaining debris and have been tasked with removing foundations for buildings that are determined to be unsalvageable. Nyander says he hopes to complete tornado-related work early this year; the debris removal portion of it, anyway.

“The rebuilding will probably last a lifetime," he says.

Katrina was the sixth strongest Atlantic hurricane in history. Damage estimates for New Orleans now stand at about $81 billion, and the death toll at 1,836. Cynthia Sylvain Lear worked for the city in 2005 when Katrina hit, but was not part of the Sanitation Department, where she is now director.

“We have learned a lot since Hurricane Katrina from the standpoint of waste management and waste debris removal,” she says.

Even before Katrina, the city contracted with outside companies for emergency waste management. “The rules are more defined now than in the past,” Lear says, referring to the change in how waste is handled since that event. 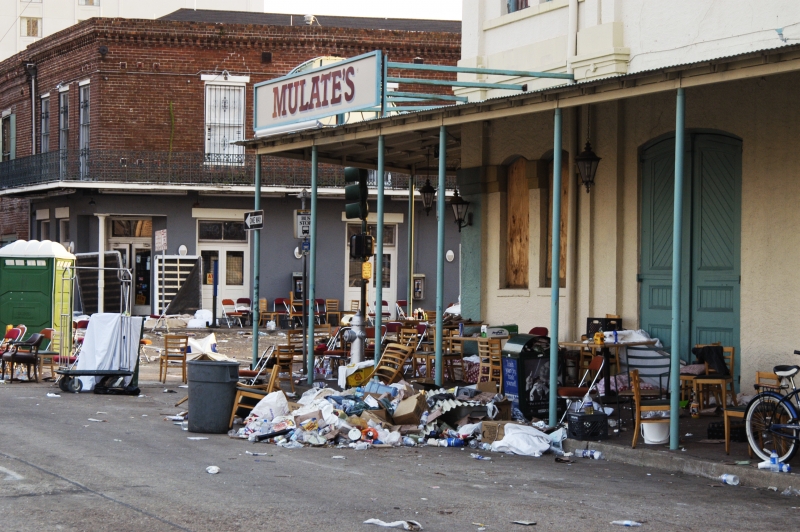 Today one contracted company, The DRC Group, based in Mobile, Ala., specializes in debris removal while a second, McLean, Va.-based Science Applications International Corp. (SAIC), is on standby for monitoring. Both must follow strict guidelines for how the waste is removed. “This allows us to supplement our staff to take care of those functions and document those activities,” she says.

“Post-Katrina, we do have a smaller staff,” Lear says. “Being able to pull the companies at a moment’s notice is definitely an advantage for the city.”

The city now has five sites certified for emergency processing of waste, including two landfills. All departments participate in waste removal; the scale of the event determines whether they need to involve a third party.

Much of what Lear learned from Katrina involves citizen awareness. “Expect the unexpected. Most people thought they’d be back in their houses in three days,” she says. “This was a magnitude most hadn’t seen.” 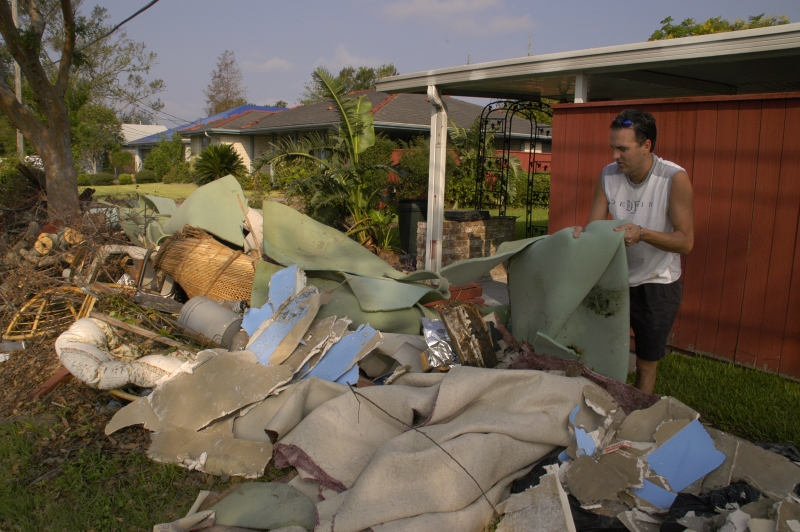 New Orleans residents have learned a good deal since Katrina. For example, after that hurricane a lot of refrigerators had to be thrown out because of food contamination. Now people are aware of the need to clean out their refrigerators in advance of an oncoming storm. The city will have two household hazardous waste days in 2012. Lear says that’s important to get as much of that material collected before a disaster: “People are more prone to take care of personal property in a different way.”

But Lear knows Katrina was a unique challenge. The biggest was the sheer volume of debris, with 85 percent of the city flooded. “You had so much carpet, wood, food items,” she says.

As with Nyander in Joplin, Lear emphasizes the importance of planning. “It’s very important that you document the equipment and the manpower in-house and discuss what the roles will be,” she says. Having good communications devices is important; during Katrina cell phones weren’t functioning. 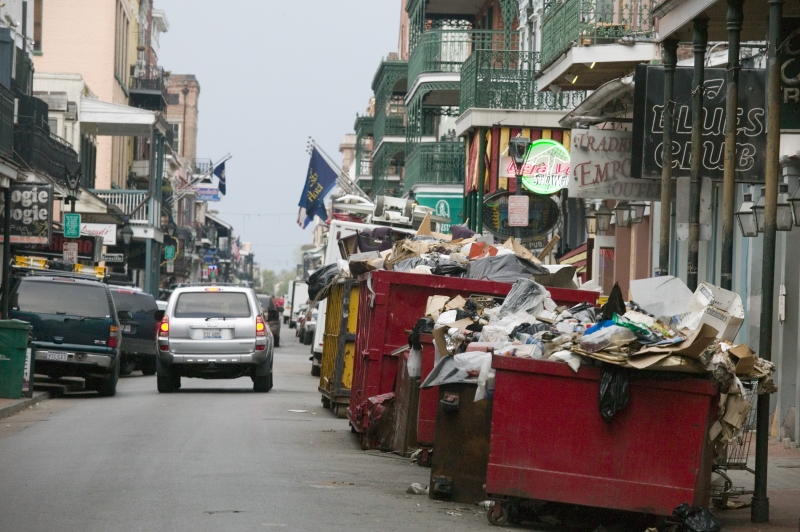 Lear says it’s also critical to know in advance where items can be stored and what types of items go where “so that we can remove and dispose of items as quickly as possible. You don’t want to create another disaster by improperly disposing of debris.”

Have the emergency contracts in place in advance. “You don’t know when any kind of a disaster will hit,” she says. “Building those relationships is important.” The contract company also needs to understand federal guidelines.

Get locals ready to contribute as well. “It’s very important to use a company big enough to pull resources together,” Lear says, “but you also want it so that local people can participate.”

Lastly, document everything, from the volume of material collected to what’s sorted and stored, which trucks are involved, what are they picking up, etc. “Documentation is critical to getting reimbursement, particularly if FEMA funding is involved,” she says. Here again is where the outside companies can help. “We wouldn’t have had the manpower to track the information in-house,” she says.

Waste Management Inc. believed it was prepared for disaster management. But like most of the world, it didn’t anticipate what it had to deal with after Sept. 11, 2001.

“We always had disaster management plans. But they were on your basic natural disasters,” says Chris Chiodo, then safety manager and now district manager for transfer station and transportation, Delmarva area (Delaware, Maryland and Virginia) at Waste Management. The man-made disaster of terrorism presented “a whole new set of possibilities of what we had to be prepared for. We had to think outside the box for future disasters.” 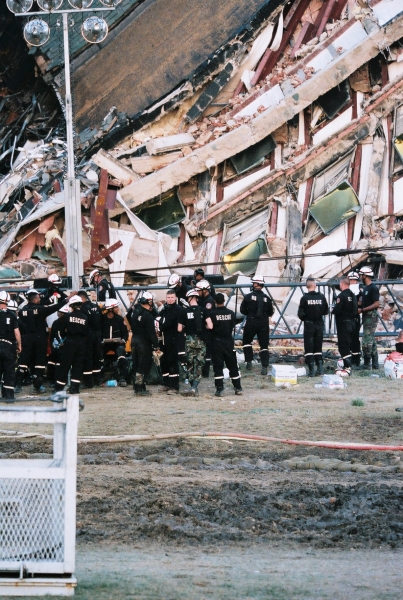 Waste Management was a subcontractor on the Pentagon cleanup. The Houston-based company was responsible for loading up the debris after the primary contractor sorted through it, then move it out within a 24-hour period. This lasted for six weeks. “We had to get that out in a very small space, quickly,” Chiodo says.

The biggest challenge for Waste Management with the Pentagon disaster was the intense security concerns. “We were operating on the Pentagon’s schedule,” he says. “They might need you right now, or tell you ‘go leave for a day,’ or [ask you to] ‘be here in an hour.’ Everybody was a little on edge about the next terrorist attack.” The company had 40 drivers on that job that it had to juggle.

One of the things the Pentagon cleanup taught Waste Management is how to continue serving its customers in the aftermath of a disaster, even those that might not be directly affected. Issues like the loss of an access route, electricity and phone service all need to be considered. “That can be somewhat challenging,” he says.

Chiodo says maintaining regular service needs to be 50 percent of any waste and recycling disaster management plan. Customers “still need the service they get from us every day. You need to make sure they don’t have a drop-off in service. The last thing they need is to be overflowing with trash.”

Waste Management has a disaster plan at every level. The district plan is part of the larger area plan, which is contained within the regional group plan and finally the corporate plan. The plans are continually reviewed and updated. Working closely with the public sector is a key part of that. 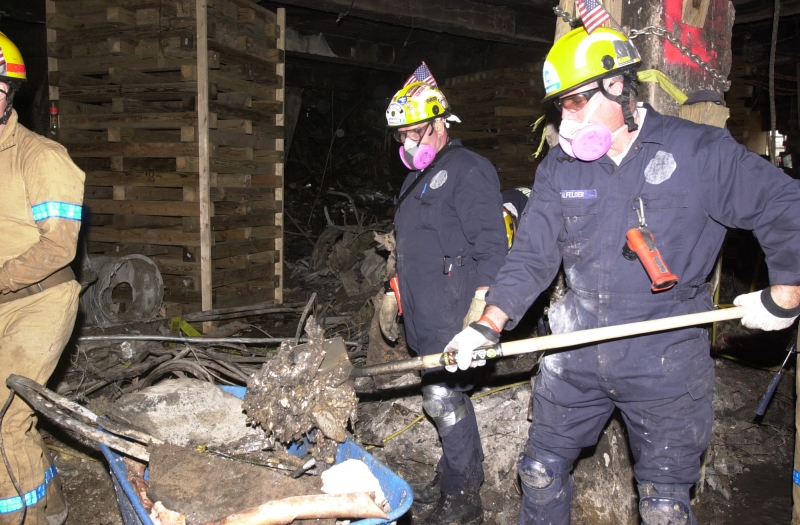 “Every plan is very specific to that specific area, tailored for that community,” Chiodo says. “We have to make sure we are intimately involved in their disaster management, to assist them.” The level of cooperation differs “depending on what they want.”

And once again, that involves doing a lot of work in advance. With the Pentagon event, one of the biggest lessons Chiodo says the company learned was “to communicate way ahead with all your customers.” Do they require security checks? Have a list of drivers available. Discuss contingencies. Find out what services the customers need, and what the company might be able to provide.

The nature of disaster preparation can be something that is easily put off until it’s needed. As Chiodo points out, “At that point it might be too late.”