<p> Soot is washed from the streets of Manhattan in the aftermath of Sept. 11.</p>
Ten years after the devastation and destruction of Sept. 11, sanitation workers who were on the front lines recall what it was like to literally pick up the pieces.

Mike Mucci was serving as director of New York City’s Fresh Kills landfill on Staten Island. He was on the phone with one of his bosses, who told him a plane had just hit the World Trade Center (WTC).

John Nucatola was responsible for street cleaning for the New York Department of Sanitation (DSNY). The Twin Towers were visible from his office window in Queens. As he looked out that morning, he spotted what, at first, was just a small column of smoke trailing from one of the buildings.

Meanwhile, in Sterling, Va., Waste Management Safety Manager Chris Chiodo was making photocopies of medical cards and driver’s licenses when he heard that one of the WTC buildings had been hit, followed shortly by news of the second collision. Then the Pentagon was struck. “We went from, ‘This is terrible,’ to ‘This affects us,’ ” says Chiodo.

The Mess in Manhattan

“We knew when the first tower collapsed, we would be involved in some way,” said Mucci, now New York’s director of waste disposal. With his deputy (then and now), Dennis Diggins, they organized a convoy of 26 pieces of equipment – front-end loaders, backhoes and articulating trucks. They realized equipment with rubber tires, not tracks, would work best rolling over crucial obstacles such as fire hoses, Diggins says.

It wasn’t decided until late that night that the debris from the WTC should go to Fresh Kills, which ironically had just been closed in March. At 2 a.m., Mucci met the first load of debris at the landfill. By 6 a.m. he had begun formulating a plan for transporting and disposing of the massive amount of debris from what would soon be known as Ground Zero.

The characteristics of Fresh Kills were ideal for the job, Diggins said. The site featured a flat area of 165 acres that had been graded off shortly before Sept. 11. The facility was conducive to barge transport, which was quickly determined to be the best mode of transport for the job. The city dredged and opened two additional barge-loading operations, ultimately employing four in all.

“It was our job to make sure every pound made it to the forensic search team,” Diggins says of the material that fell under his purview. 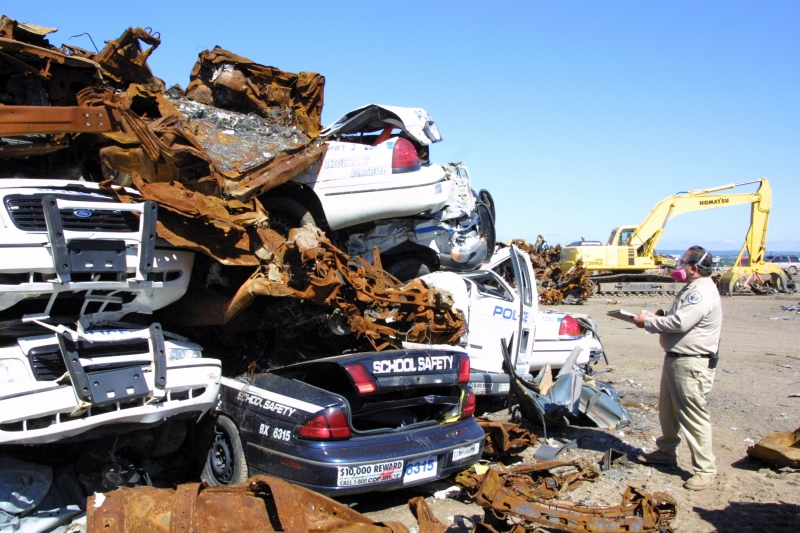 There also were concerns about issues such as damaging Fresh Kills’ gas collection system. “We wanted to make sure we didn’t do anything to compromise the landfill,” says Mucci. Due to the extremely dense nature of the debris, a weight analysis was conducted ensure that the heavy loads wouldn’t crush the gas infrastructure beneath, Diggins adds.

Of course, the debris contained a tremendous amount of structural steel. The city used its current recycling contract supplemented by another firm to recycle what it could of almost 400,000 tons of steel.

As the disaster unfolded, Nucatola was tapped to take charge of the street and area cleanup. Plans were made and a staging area was established in a garage by the East River. But it wasn’t until the evening of the 12th that Nucatola’s crew was cleared to go into specific areas. They divided the job into sectors and tackled one or two at a time, with 80 to 100 workers per sector using basic cleanup implements. “The soot was so deep it was difficult to do with brooms or shovels,” says Nucatola, now director of the city’s bureau of cleaning and collection. “You could see the tire tracks, like snow.”

The Pentagon was going through renovations at the time of the attacks, and the contractor there was tasked with the cleanup, Chiodo says. Waste Management provided the open top containers needed to get the debris out, and handled the hauling and disposal.

“Basically we created a hauling district overnight,” says Chiodo. “Because they were working in a small space they needed a quick turnaround on the debris. We were moving tremendous amounts of material.”

Waste Management brought in 60 drivers from across the country for the job, operating two 30-man shifts out of Fredericksburg, Va., moving material to the King George County landfill.

Chiodo says he served as a “glorified house mother,” arranging flights and hotels and handing out per diems. He was on call 24 hours a day. Today he is a district manager overseeing transfer stations and transportation for Waste Management’s “Delmarva” area (Delaware, Maryland and Virginia).

The cleanup aspect of the project took four to six weeks. Progress was slow due to regular halts for security checks. “They’d tell the trucks, ‘get out, don’t come back until we tell you,’ ” says Chiodo, adding that the delays could last four hours or 12 hours. “That’s the kind of schedule you’d have to deal with.”

The Defense Department wanted the debris going from the Pentagon to the King George landfill segregated from other material and surveyed, which Waste Management did. The company’s people also stayed on to help construct the replacement wall where the plane had hit.

The projects in New York and Washington each presented unique logistic and mental challenges. “The emotional issues were bad, but you put it aside,” Mucci says. “Organizationally, it was the first time I can remember everyone worked together for a common goal.”

The agencies involved met every day in New York. “We had to educate all these agencies on what you can do at a landfill,” Mucci said.

Different agencies were bringing in different equipment. DSNY requested and got a project manager to address that problem. But in many ways the agencies operated on their own, Nucatola says.

“It was chaos – no rules,” he says. There were no street lights, and people made their own paths and roads, at least at the beginning. And there were tensions between the sanitation workers and other agencies.

The work was physically exhausting for Nucatola’s staff, which averaged about 350 people per shift. They were on the job until early November. But that paled compared to the emotional toll of working in the shadow of tragedy.

“There was the horror of it as you were working – the body bags going past,” Nucatola says. “We were removing crushed cars, and we had requests for license plates from people who were missing. There was luggage at the hotels of stuff that remained there.

“People working felt an obligation to look for bodies. It was more for the living than for the dead. We had to balance that, do it once a shift.”

The dogs searching for bodies were frustrated because they weren’t finding anything. Officials “asked the sanitation workers to pet them when they came off the pile to make them feel better,” Nucatola says.

And some workers were doing their own grieving. “Three of our assigned people lost family members,” Diggins says. “So it was personal for us.”

“Working in a place where family members died – that can’t be easy,” adds Mucci.

But Chiodo stresses the “somber pride” workers felt at the Pentagon cleanup. “There was a sense of purpose to what we were doing,” he says. “It was a sense of helping to the country getting back to it.”

Those workers came from all over the country as strangers, says Chiodo, but formed a quick camaraderie. “There was a poignant moment when everyone autographed each other’s hardhat, [so] that they could take [it home] with them,” he says.

“The staff was magnificent,” Mucci says of his New York crew. “Retirees called in asking, ‘What can I do to help?’ Everyone was extremely cooperative.” Adds Nucatola: “At the end of the shifts they were totally wiped. Everybody did way above what they would normally do.”

Mucci rates the overall operation “a tremendous accomplishment, as far as what we were tasked to do.” More than 1.6 million tons of material was removed from Ground Zero, according to Diggins. “It was all searched down to a quarter of an inch, then landfilled,” he says. A substantial amount of human remains were discovered because of DSNY’s efforts.

As far as normal hauling, “regular collection didn’t suffer,” Mucci says. The only disruption was in lower Manhattan, noting that there weren’t many people down there for a while.

“All things considered, as far as sanitation is concerned, we went from a closed landfill to a fully operational facility in a matter of days,” Mucci says.

Diggins recollects how then-mayor Rudy Giuliani wanted to get the streets of lower Manhattan opened within a week. “In order for us to play a major role here, we had to have the streets back to normal,” Nucatola says. “People can understand that. I thought that was an important role for us.” Getting Wall Street open in particular was important, he adds, and “symbolic to the whole world.”

To some extent, Ground Zero got more worldwide attention than the Pentagon. Did that bother any of Washington-area workers? “I don’t think so. It was just very different,” Chiodo says. “Ours was a cleanup and rebuild. I can’t emphasize that enough: We were rebuilding the Pentagon. There was a lot of pride in it.” That job was completed a couple of months after the cleanup.

What Can’t Be Reclaimed

In the aftermath of Sept. 11, solid waste services operations gained valuable emergency management awareness. “I think we saw how important it is to have plans and drills. It’s best to get inside and have support come to you.” Says Chiodo, “It gave us the sense that we can handle a major disaster/recovery situation.”

But emotionally, the impact of those harrowing days remains fresh. “Everybody has something,” Mucci says. “Do you see it outwardly? Maybe not, but everyone has scars from that operation.”

Nucatola says his right-hand man at the time never recovered from dealing with the disaster. His career and marriage went downhill and he developed a dependency problem. “Many, many of them continue to have thoughts about that time, those days and nights.”

He still has his clothes from that back then in his garage as a reminder. And he worries about what might happen again. “I have uneasiness about going to a baseball game.”

Considering the anniversary, the solid waste officials had no plans to commemorate the industry’s contribution to the Sept. 11 response. Mucci says survivors are permitted to visit Fresh Kills to see where the debris went.

Sanitation workers didn’t go into the buildings like police and fire officials, Nucatola says, but they took on many of the same hardships and risks, such as prolonged exposure to the post-disaster air. “I feel we should get as much recognition [from other city officials] as first responders. Sanitation played a large role at that point in time. In many ways we were the lead agency.”

At the time it happened, Chiodo says, “We weren’t thinking beyond the day.” Later, everyone involved received a letter of commendation from Defense Secretary Donald Rumsfeld. In his 14 years at Waste Management, Chiodo says that’s the recognition he most proudly displays.

Mucci sums it up: “I think the department can be very proud of its contribution and the way we reacted.”