Material recovery facilities (MRFs) are getting better at sorting things out. They have to. Homes and businesses are all recycling more.

According to the U.S. Environmental Protection Agency (EPA), Americans currently recycle 65 million tons of municipal solid waste (MSW) that used to be landfilled. Another 20 million tons of material goes to composting facilities.

All told, the United States now diverts 34 percent — more than one-third — of the 250 million ton annual MSW stream. That’s up from less than 10 percent in 1980. Construction and demolition (C&D) MRFs recycle another 53.4 million tons per year, about 30 percent of the total C&D waste produced in the United States (see sidebar below).

Driven by diversion regulations developed by governments as well as growing public concern about the environment, the volumes of materials delivered to MSW MRFs will continue to rise and require facilities to sort more materials efficiently and effectively. 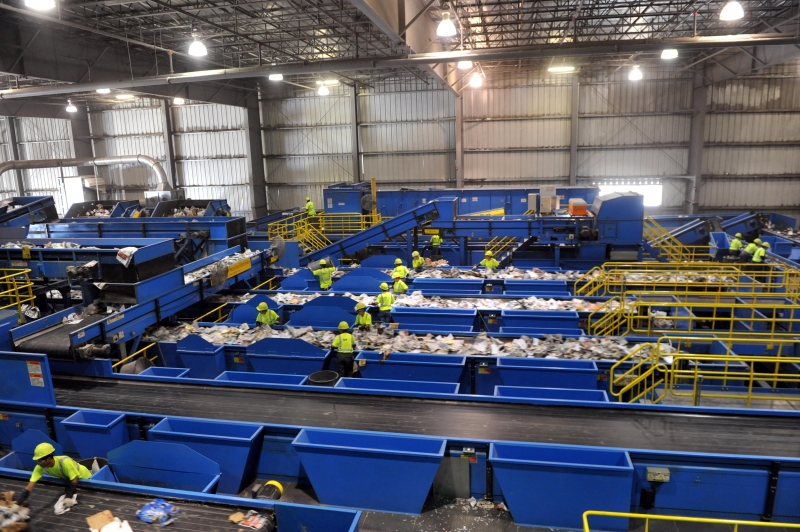 Planning involves studying and analyzing the kinds of recyclable commodities and volumes available from a particular geographic area. It also requires a strategic understanding of the customers that will buy the commodities processed by a MRF. Finally, a MRF must have the logistical expertise to move commodities to paying customers continuously. Both marketing and logistics may affect the site selection component of MRF design. After planning comes execution with the development of a MRF design tailored to the strategic concepts.

Giving short shrift to any of these considerations can cripple a MRF’s performance. 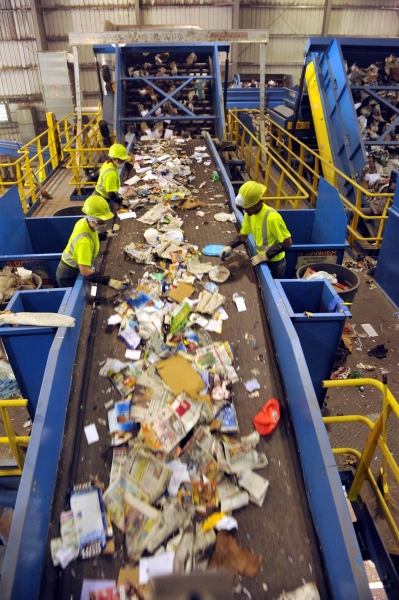 For Neura, MRF design begins with local diversion requirements that control the inbound mix and volume of commodities. “In some markets, for instance, legislation may require all commercial establishments to recycle,” he says. “That will affect the inbound mix and volume, which in turn will affect the screening and sorting technologies applied to a particular MRF design.”

One holds trash; another contains single stream paper, plastic, glass and metal; a final container collects food waste, yard waste and other organics. The third container accommodates paper products like paper towels with food waste stains, which might otherwise show up in the trash or the recycling bins.

By contrast, most cities in other areas of the country continue to employ conventional single-stream recycling systems, while some communities still use dual-stream recycling.

Another influence on MRF design relates to the evolving volume and mix of commodities. As communities switch from dual-stream to single-stream recycling, for instance, the volumes of recycled commodities sent typically increase by an average of 30 percent, says Pat DeRueda, president of Houston-based WM Recycle America, a subsidiary of Waste Management Inc.

All of these considerations affect the individual MRFs.  The chief design considerations include the numbers of screens, the size of the openings in the screens as well as the number of hand-sorting stations.

Marketing strategy influences design as well. How much of each commodity can a plant process, sell and ship profitably? The answer will help to establish a plant’s size and throughput specifications.

When market demand is high, buyers will take materials in virtually any condition. But when demand slides, buyers will pay less for contaminated materials.

In June of 2007, WM Recycle America opened a state-of-the-art single-stream recycling facility in Elkridge, Md., a suburb of Baltimore and Washington.

The $7 million, 50,000-sq.-ft. facility can — and does — process 1,000 tons of recyclables per day. Conceived initially to serve Maryland’s Howard and Anne Arundel counties, the facility’s size enabled it to accept materials from across the metropolitan area. The facility receives a mix of residential and commercial recycling materials. 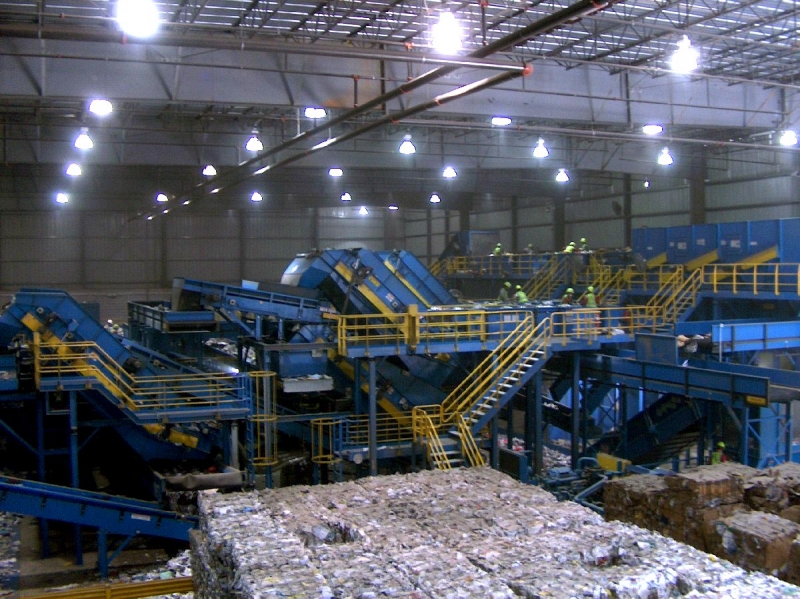 “We tailored the location and design of the facility to the processing requirements of incoming materials and the demands of the manufacturers that would buy the outgoing commodities,” says Jim Marcinko, director, Delmarva (Delaware, Maryland and Virginia) area recycling operations for Waste Management.

The Elkridge location near the Port of Baltimore makes it easy to ship outgoing paper to buyers in India, South America and other international locations. Nearby trucking and train terminals enable the plant to sell metals and plastic to domestic markets.

Screens are the workhorses in Waste Management’s Elkridge facility and in most of today’s single-stream MRFs. Large conveyors move materials onto screens, which allow small materials to fall onto conveyors below. The larger materials move to other lines. Generally set on a rising incline, the screens feature many rotating axles. Star-shaped paddles spaced out across the length of each axle turn in concert with the axles and move the materials that don’t filter down to the bunker or conveyor line below.

At Waste Management’s Elkridge plant, arriving materials ride a conveyor to just such an inclined screen. The paddles propel large pieces of paper and corrugated fiber along the screen to another conveyor, while allowing smaller pieces, including glass, metal and plastic containers, to fall through the screen to a conveyor below. Sometimes vacuums and blowers help the materials on their way. 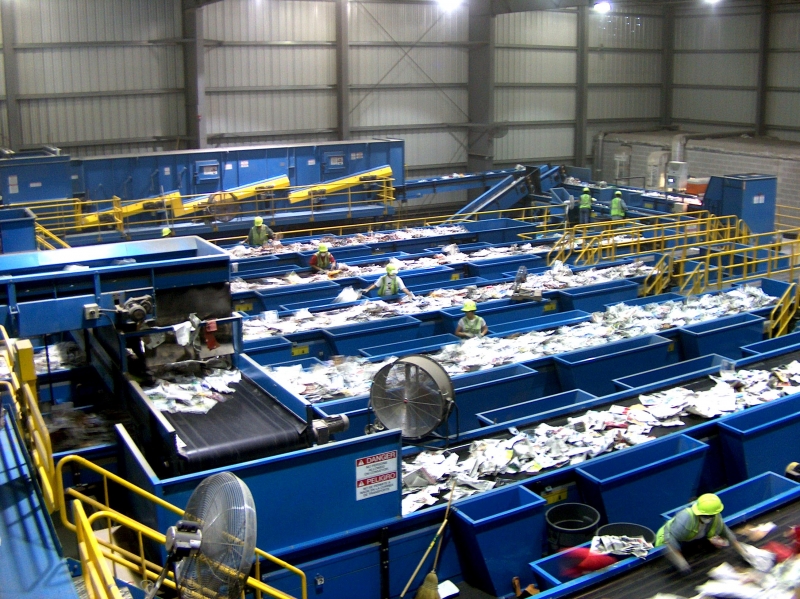 Other screens separate various sizes of paper in the same way, eventually moving corrugated cardboard, newspaper and mixed paper onto separate conveyors. Along the way, human sorters handle quality control by picking and re-directing materials that have gotten onto the wrong lines. Depending upon the size and throughput of a MRF, human sorters might number 20 to 40.

Glass containers almost always break between the time that they are dumped into a collection truck, compacted, dumped onto a MRF tipping floor and shoveled onto the first recycling conveyor. The resulting tri-colored mixed cullet does not command a high enough price for MRFs to bother with. It often ends up as residue and goes to the landfill.

This is changing. In Elkridge, for instance, a glass processor is currently setting up shop. When that company’s plant comes on line, Elkridge will deliver its mixed cullet to the processing plant that will separate it by color and sell each color to glass makers.

The metal and plastic containers that are separated early in the process follow their own series of conveyors. Magnets pull out the steel containers. Eddy currents pop aluminum cans up onto another conveyor, leaving the plastic containers moving into an optical sorting station, where a laser-based sensor identifies the types of plastic and puffs of air send each type to its own line.

Regardless of the path taken, each material is eventually conveyed into a compactor that produces bales. When single-stream MRFs first came on line, buyers complained about contamination and even tied the prices they were willing to pay to contamination rates: the higher the contamination, the lower the price.

“We’ve learned to add more screens and technologies to reduce contamination rates,” says Marcinko.
While single-stream recycling will always be forced to contend with some level of contamination, MRF engineers continue to improve the sorting technology that makes it cost effective to tamp contamination rates down into the 5 percent and lower range.

Today, however, technology can separate these packages with a sensor that can measure the thickness of aluminum in containers on the line. When the system detects a thin layer of aseptic packaging aluminum an air classifier ejects it from the line. (For more on issues surrounding carton recycling, see “Thinking Inside the Box.”)

When it first came on line in 2007, Waste Management’s Elkridge MRF was the largest single-stream MRF in the country. Today, the Waste Management standard for size is much larger. “Normally, we like 70,000 to 80,000 square feet,” says DeRueda. 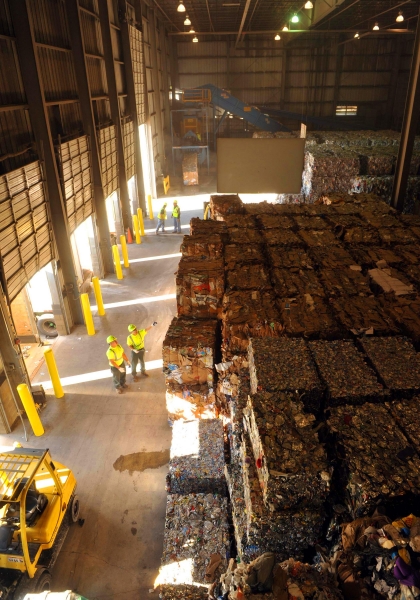 While the Eldridge MRF does illustrate state-of-the-art technology for MRFs handling both residential and commercial feedstocks, other MRF engineers are developing concepts that will use separate lines for different recyclable streams.

In Milpitas, Calif., for instance, Republic Services is currently replacing a single-stream MRF with a design that will use existing state-of-the-art sorting technology on four different types of recycling lines.

One is a residential single-stream line, explains Neura. The second line will handle commercial single-stream materials, which include office fiber and a limited amount of polyethylene terephthalate (PET) and aluminum containers.

The third line will process commercial dry waste, which includes commercial single-stream materials plus wood, rigid plastic and virtually any other recyclable material that isn’t wet.

The fourth line will handle commercial wet waste. This includes any or all of the commercial materials mentioned above that have gotten wet — plus food wastes. “This plant will give us the ability to get a very high recovery rate from commercial establishments,” Neura says. “We can drop loads into lines designed specifically for those kinds of material. We think multiple stream MRFs will become the next evolution in MRF design.”

That may be the next step. And five years from now, another great idea will revolutionize recycling automation yet again.

The U.S. economy generates about 178 million tons of construction and demolition (C&D) waste annually. Of that, an estimated 53.4 million tons or 30 percent goes to C&D recycling facilities. 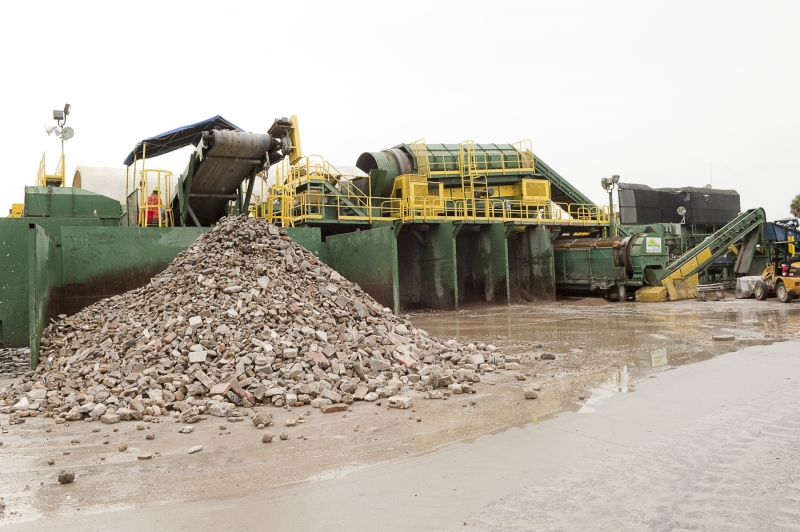 Sun Recycling, an affiliate of Southern Waste Systems, ranks as the largest privately owned C&D recycler in Florida. The company processes about 750,000 tons (or 3 million cubic yards) of C&D waste annually and plays a key role in Florida’s push to divert 75 percent of the state’s waste stream to recycling by 2020.

“Processing C&D materials at a recycling rate of 75 percent would meet 12 percent of the 2020 goal,” says Hamilton. “So C&D recycling is an important part of the state program.”

“To get there, we added a third line of hand sorters,” Hamilton says. “We’re planning to add third lines to our other facilities.” 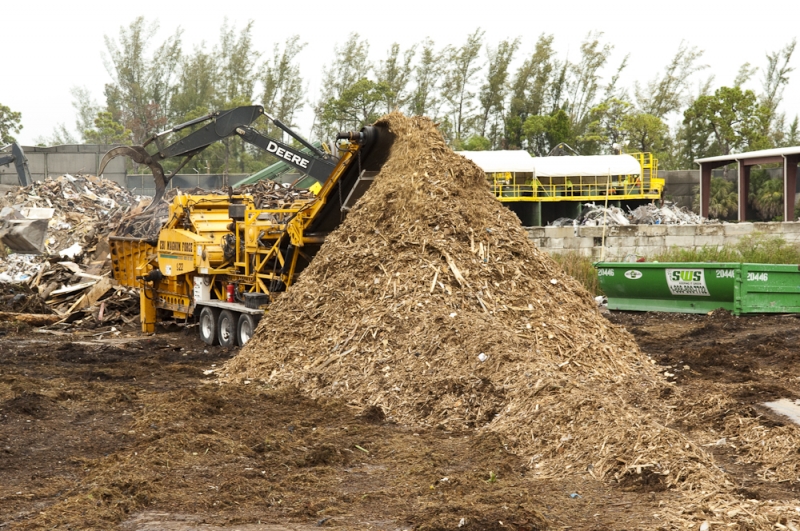 Processing aluminum is different. There isn’t much of it in C&D streams, so processing plants use hand sorters instead of eddy currents to remove it.

Sun Recycling sells some of the commodities it produces to manufacturers, while turning quite a bit of the materials it processes into end-products for sale. Sun Recycling products include aggregates in various sizes, wood mulch and a branded soil supplement called Greenfil. -- MF