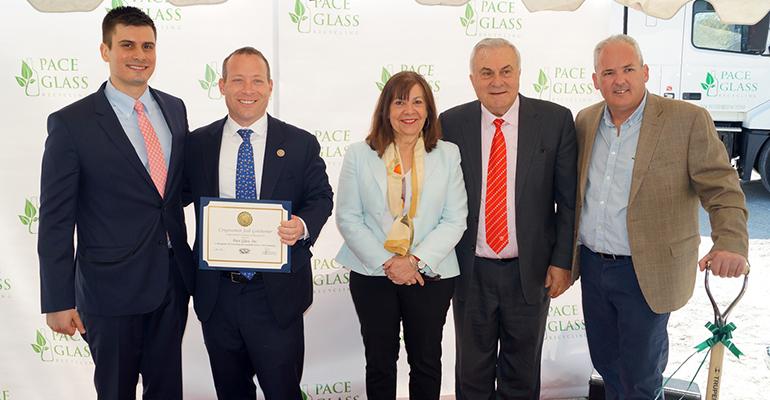 The facility will enable Pace Glass to more than triple its production capacity to more than 15,000 tons of commercial-grade recyclable glass per week.

On May 1, Pace Glass Inc. broke ground on a new 250,000-square-foot glass recycling facility in Andover Township, N.J. The new plant will be a substantially larger site than Pace Glass’ other plant in Jersey City, which will remain open along with its corporate headquarters in Long Island City. Notable features of the North Andover Township facility include designated spaces for a rail line and research and development capabilities.

Pace Glass will be creating approximately 80 local jobs in two daily shifts—nearly double the number that are now employed at the Pace Glass Jersey City location—in addition, as many as 60 truck drivers will be hired to deliver the recycled glass called cullet to manufacturers in the Tri-State area, upstate New York, Massachusetts and Pennsylvania.

With eventual plans to increase its intermodal delivery reach to other areas of the United States via flatbed railcars and barges, the Andover Township plant will also enable Pace Glass to more than triple its production capacity to more than 15,000 tons of commercial-grade recyclable glass per week and 90 tons an hour. In doing so, it will effectively become the nation’s largest facility by output. Currently, the company processes 25 tons per hour.

Originally founded in 2014, Pace’s recycling process utilizes optical scanner technology that takes 1,000 pictures per second to sort glass by color before separating and depositing it via jets of air into three designated containers on a conveyor belt. The glass products are then converted to cullet, which can either be transported to neighboring manufacturing facilities or placed into onsite melting furnaces. The residual dust can be sold as filler for a variety of different products.

“Especially in densely populated cities throughout Northeast, the process of how glass is recycled has literally become broken. Through our innovative technology that is able to capture and repurpose 90 percent of what is currently landfilled, Pace Glass has found a way to help remedy that,” said Valiotis in a statement. “The town of Andover has been instrumental in giving us our approvals, and we feel very fortunate that they have been so supportive.”

After the ground was officially broken with ceremonial shovels, Gottheimer presented Valiotis with a Congressional Certificate of Recognition presented to Pace Glass for its outstanding and invaluable service to the community.

“We are more than extremely excited about the fact that we’re opening here and the potential growth within the company,” said Mahoney in a statement. “They have been more than welcoming to bringing in new business and making the process move quickly. With the addition of the new Andover Township plant, we will be able to strengthen our position as a leading glass recycling technology provider on a much larger scale.”

Construction is slated to be completed over the next 14 months and operations are expected to begin in early 2019.