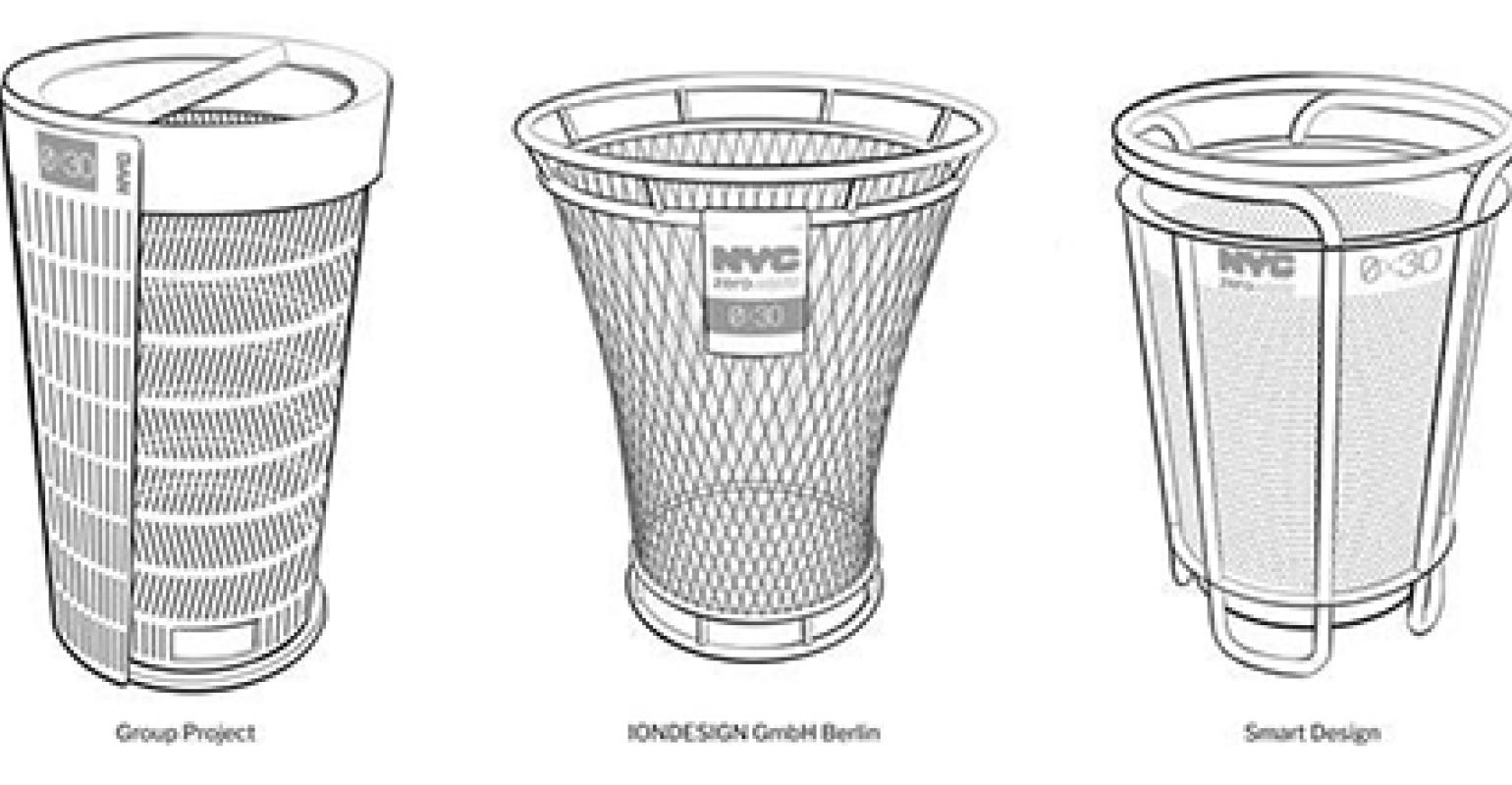 The City of New York Department of Sanitation (DSNY) and Van Alen Institute, in collaboration with the Industrial Designers Society of America (IDSA NYC) and the American Institute of Architects New York (AIANY), have announced the three finalists in their BetterBin competition. The competition offered designers an opportunity to reimagine New York City’s iconic green wire litter basket.

The three finalist design teams are: Group Project (Colin P. Kelly), IONDESIGN GmbH Berlin and Smart Design. After each design team completes the contract registration process, they will work closely with the competition coordinators to refine their designs and produce 12 full-size prototypes that will be tested in New York City neighborhoods in summer 2019.

“We’ve been stunned by the immense response to the competition and the enthusiasm from the design community in taking on this challenge. While there were a number of strong and innovative concepts, the three finalists really stood out for their ability to effectively balance a very difficult set of design criteria,” said Peter Schon, chair of IDSA NYC, in a statement. “They applied a diverse range of approaches to ergonomics, aesthetics and manufacturing methods. Of course, the proof is in the pudding, so we’re very excited to move onto the prototyping stage.”

New York City is home to more than 23,000 litter baskets that offer pedestrians a convenient way to dispose of refuse and recycling on the go. The most widespread design—the green, wire-mesh basket—dates to the 1930s. While iconic to the streets of New York, the wire basket is in need of a redesign to address the current and future waste needs of the city.

“The finalists of the BetterBin competition have proposed innovative, functional and attractive designs that have taken something as mundane as a sidewalk litter bin and turned it into an element of urban design that enhances NYC’s streetscape,” said Benjamin Prosky, executive director of AIANY, in a statement. “At a time when the city is increasing its recycling and composting efforts and has set a goal to drastically reduce waste, it is important to draw attention to how and where we dispose of our waste.”

The BetterBin competition offered designers from around the world a chance to envision a new litter basket with a sustainable, environmentally conscious and ergonomic design that could improve the quality of life for New Yorkers and the service experience for sanitation workers.

“While residents and visitors may be familiar with the iconic green city litter basket, there is no shortage of fresh, new ideas to modernize and reinvent it for the future. We were thrilled to receive nearly 200 submissions from around the world,” said DSNY Commissioner Kathryn Garcia. “The BetterBin team is excited to announce the finalists for the competition, and we look forward to testing the prototypes in 2019.”

Each finalist will receive $40,000, which includes an award and funding to produce full-scale prototype baskets for testing out on New York City streets. Prototype testing will take place in summer 2019 and will be accompanied by a public opinion survey. After the testing period, the judging panel will select a first-place winner based on prototype performance, public response and feedback from DSNY's sanitation workers. The winner will be eligible to contract with the city for further design development to ensure the ability to mass-produce the basket at a reasonable cost, as well as refine technical issues.

“With three firms able to come up with strong ideas for the redesign of a nearly 90-year-old fixture of the New York cityscape, this project is a reminder of how important it is to revisit even the most enduring designs against evolving user needs,” said Jessica Lax, director of strategic initiatives at Van Alen Institute, in a statement. “We look forward to the field tests this spring and hearing from the public and sanitation workers on the best fit for our ever-changing city.”