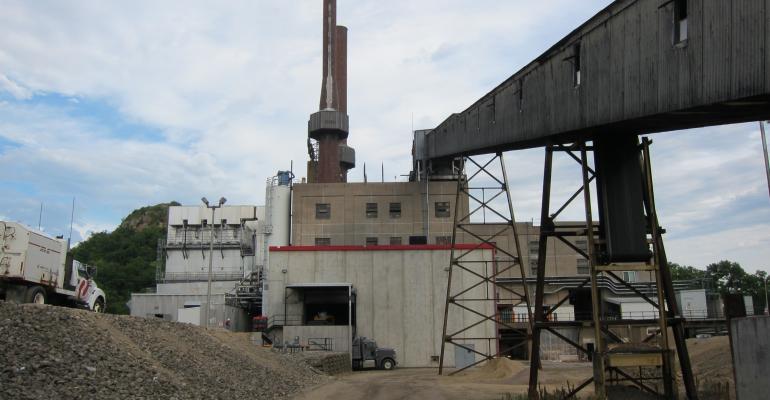 Early in 2017, Red Wing, Minn., planned to modify the portion of its waste management facility that housed a decommissioned incinerator in order to upgrade its processing lines and equipment. But after a catastrophic fire in June that year, the project got more involved. New plans were to construct a whole replacement building in order to process more waste to be used for refused-derived fuel (RDF) and improve overall operations.

“The fire provided an opportunity to reexamine our layout and put together a more efficient and effective design that will enable us to almost double capacity,” says Jeff Schneider, deputy director of public works for Red Wing.

Upgraded features include a quality control station to monitor materials recovered from the eddy current separator, as well as improved conveyor system magnets and screening equipment. There will be a larger receiving area for single stream recyclables. There will be one area to service all equipment, which previously was done from multiple locations. And stationary shredders will replace a mobile one.

“Red Wing will recover more materials for fuel with the stationary shredder than with the mobile one and will no longer have to double-handle garbage. Upgrades and modifications will also enable the city to make a higher quality fuel and increase overall operational efficiency,” says Nathiel Egosi, president and CEO of RRT Design & Construction, which was commissioned for the job.

The incentives for this $12 million project were there. For one, says Schneider, “We didn’t have much in the way of an alternative. But, in addition, we have a $2 million grant from Xcel Energy for this system, $3 million in state appropriations for solid waste activities and a $1.5 million insurance settlement.”

Processed materials remaining after recyclables are recovered will be shipped 7 miles away to Xcel Energy, which will use this RDF to make steam for its turbines and to generate electricity for the grid.

“We are following the waste hierarchy to recover energy from waste above landfilling. And we will pay a reduced rate to send materials to Xcel over what we’d otherwise pay for landfill disposal,” says Schneider.

Waste will come primarily from Goodhue County and the city of Red Wing; the rest will come from the surrounding region.

Schneider expects to initially receive about 35,000 tons and to offer capacity to surrounding municipalities after 2019 when the operation is fully functional.

For now, only one city outside of Goodhue will provide waste to the plant, but Schneider anticipates more demand. “Already, we have one community I had to turn away that we’d like to partner with, but we can’t take more until the project is complete,” he says.

The city wanted to maximize reuse of existing assets, so RRT had to investigate how to go about this.

“We had to know what they had, as well as its condition, how we could reuse [what was reusable] and whether doing that would be more or less expensive than buying new equipment,” says Egosi.

“We had to consider capital and operating budget in addition to state goals for recycling and diversion [90 percent]. And we had to meet Xcel’s fuel specs,” he says.

Xcel’s Red Wing plant provides 22 megawatts of electricity, enough to power about half the homes in Red Wing.

“Refuse-derived fuel provides reliable electricity for our customers and prevents thousands of tons of municipal waste from being sent to landfills. RDF processing also enables the recycling of valuable metal,” says Randy Fordice, Xcel Energy spokesperson, adding the company has a vision to provide 85 percent carbon-free electricity to its customers in the upper Midwest by 2030.

“RDF plants are considered renewable energy under Minnesota law, so the city’s plant helps to meet that goal,” he says.