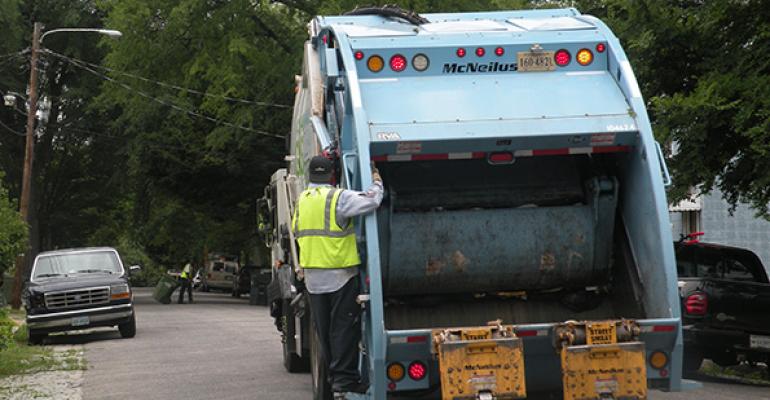 Dwindling budgets and skyrocketing costs have municipalities across North America looking to privatize city-run services, including solid waste and recycling.

Detroit and Toronto are two municipalities that recently turned to privatized solid waste collection. The goal is trimming budgets, perhaps by cutting expenses like workers' healthcare and pension costs, and cutting maintenance costs for a fleet of collection vehicles. But is privatization the answer for every municipality?

"Generally speaking," says Chaz Miller, director of policy and advocacy at the National Waste and Recycling Association (NW&RA), which represents private-sector U.S. waste and recycling companies, "in the cities that are privatizing, the process has run smoothly."

In fact, Miller says, things seem to be running efficiently in both Toronto, where half the city's hauling is now privatized, and in Detroit, where two private companies split the city's contract.

"Trash is being collected. It's being disposed of properly, and tax payers are one step ahead of the game," Miller says.

In Toronto, the city's previous mayor, Rob Ford, believed outsourcing was the right answer for Canada's largest city. In 2011, Toronto contracted with private firm Green For Life, which now services 165,000 homes in the city's District 2.

Two years later, under the leadership of Mayor John Tory, the city's Public Works and Infrastructure Committee is still testing the privatization waters.

An Auditor General's report presented in early 2014, seems to confirm that overall savings for the first year of operations was approximately $11.5 million. But the discussion continues.

This month, city Councilor Jaye Robinson told the committee, "In my discussions with the mayor, we agreed that our objective is to provide the best possible services to Torontonians at the lowest cost. Across the city, we have to explore each and every opportunity to deliver municipal services efficiently, effectively and affordably."

The committee requested a report from Beth Goodger, the city's general manager of Solid Waste Management Services, detailing savings and efficiency options in curbside waste collection. The report, said Robinson, is "to ensure we have the necessary facts and background to make an informed decision."

The report due in April, should include a review of curbside collection costs across each district, an assessment of approaches to waste collection service from comparable jurisdictions and an independent third party review of staff's analysis.

"Can it be done privately? The answer to that is obviously, yes, because there are many, many private sector residential collection communities across the country," Miller says.

The next question is whether it can be done at a lower cost?

"Well, what we see with these contracts is that the overall price to the local government goes down," Miller adds.

The city of Detroit appears to be on the same page. In May, the financially-strapped Motor City began private solid waste collection and single-stream recycling in several zones of the city. Two companies, Rizzo Environmental Services Inc. and Advanced Disposal Inc., split the city's estimated 257,000 residences.

The city's emergency manager said the city chose the companies based on their ability to provide significant cost savings (an estimated $6 million a year), an enhanced level of service to residents and jobs for many of the 150 affected city employees.

Still, privatization may not be for all municipalities.

In 2011, Toledo, Ohio, under former Mayor Mike Bell, contracted out its solid waste services for more than 180,000 households. Bell suggested the switch would save the city $2.8 million.

But current Toledo Mayor D. Michael Collins, who opposed privatization as a councilman in 2011, has considered retaking control of the city's solid waste. However, Collins recently said it is not possible to bring services back in house despite questioning whether the savings and improved service have materialized. Collins says he will instead look at better contracts that favor the city over the hauler.

The city of Memphis also considered privatization but instead chose buyouts to cut the number of sanitation workers and reduce the costs associated with those employees. The cities of South Miami, Fla. and North Miami Beach, Fla. also recently have bucked the trend by sticking with public collection.