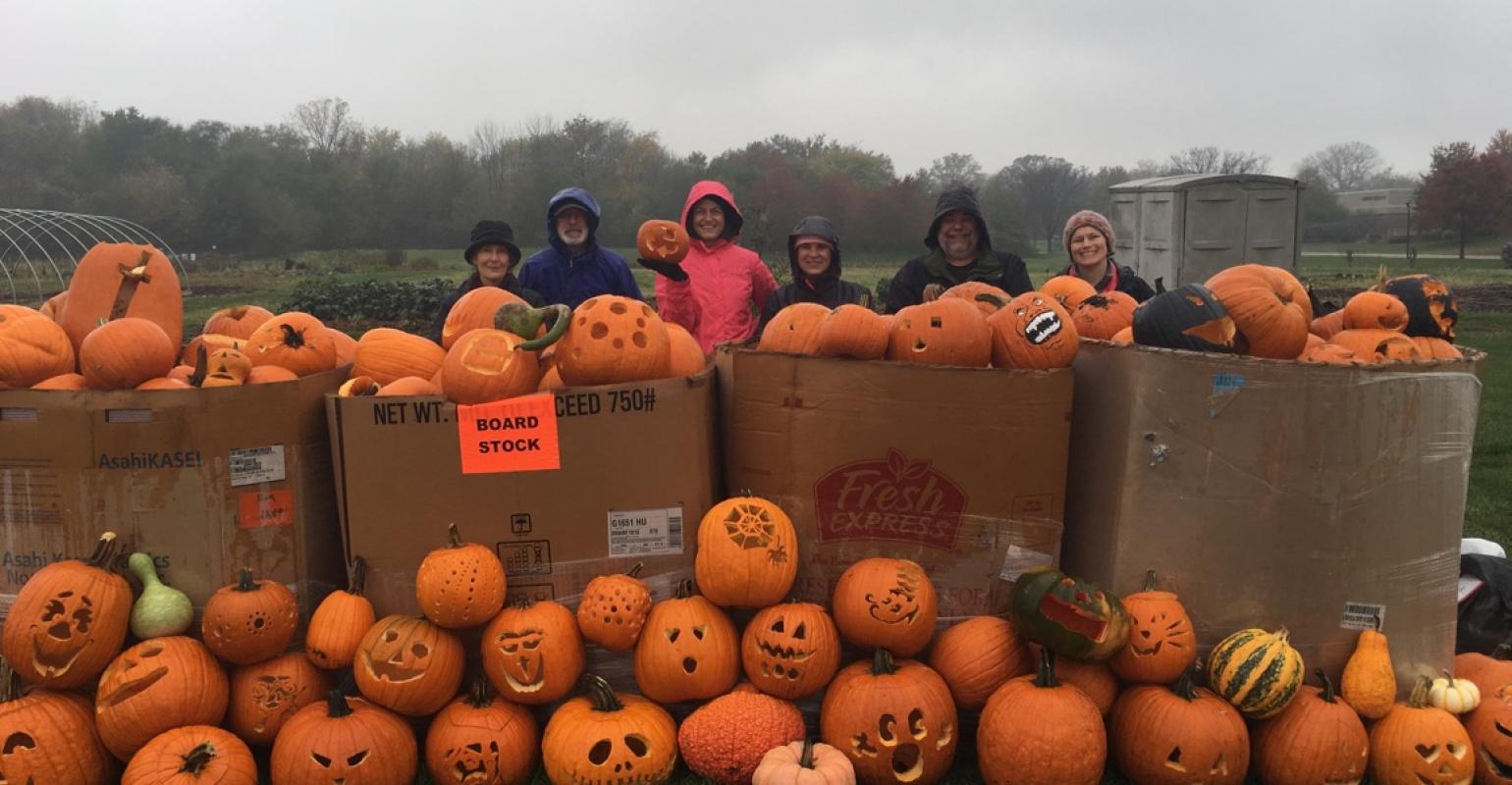 Start Slideshow ›
SCARCE has developed an annual event to collect and compost post-Halloween pumpkins in an effort to divert organic waste from landfill.

“Don’t trash it, smash it.” It’s the motto of a one-day, annual Pumpkin Smash event that Glen Ellyn, Ill.-based SCARCE (School & Community Assistance for Recycling and Composting Education) has been putting on for five years now.

This year’s event will be held on November 3 at various locations across the state, where people can bring their leftover Halloween pumpkins to be collected, catapulted, smashed or used for games before they are composted. SCARCE, with the help of the Illinois Environmental Council (IEC), started the event five years ago as a pilot program.

However, when it came time for the Pumpkin Smash event to take off in the state, a formal law for one-day collection events needed to be implemented. So, SCARCE and IEC worked together to write a law to allow for special events to divert organics and other types of food waste from landfill.

“We were trying to come up with a fun way for people to learn about contaminants and food scrap composting, and it seemed like Halloween and pumpkins would be a great way to get kids and families involved,” says Kay McKeen, SCARCE founder and executive director.

Illinois is one of the largest producers of pumpkins in the country—the state grows about half a billion pounds of pumpkins every year, notes McKeen. Over the past few years, more than 163 tons of Halloween pumpkins have been cumulatively collected during the Pumpkin Smash.

McKeen says that the event also puts a heavy emphasis on public education. SCARCE staff and volunteers school participants on contamination and stress the importance of removing candles, plastics or any stickers from the pumpkins before they are collected, smashed and composted.

SCARCE also informs the public that pumpkins comprise around 90 percent water, which makes them extremely heavy. And pumpkins that end up in a landfill become leachate at the bottom and emit methane gas near the top.

“In our area, every one of the composting facilities is closer than a landfill, and as more and more states have fewer landfills, it’s a longer drive,” explains McKeen. “So, it’s more fossil fuel, more diesel fuel, more fumes and more wear and tear on our roads. We thought we could reduce leachate, reduce methane gas and reduce the distance we were traveling with the pumpkins and that heavy weight. We are also looking at our carbon footprint and looking at ways to keep our water cleaner.”

“Pumpkins are listed as one of the top 50 foods in the world for antioxidants,” she adds. “So, if we’re putting them back in the ground, they are making soil healthy and we don’t need as many fertilizers. We know that pests don’t thrive in healthy soil, so we’re just looking at the whole aspect and trying to figure out a way to make learning about food scrap composting fun.”

Carrie Horak, digital communications coordinator at SCARCE, says that during the first year the event was held, the organization received calls from all over the state and even in Ohio. Through the years, high school and middle school students have gotten involved with the event, as have volunteers and other community organizations. Horak notes this has helped SCARCE educate the public and spread the importance of composting and the need for clean, contaminant-free materials.

“We’ve gotten calls about the law we wrote, and people could look up their own language for food scraps and other organics,” says Horak. “They can kind of just copy it; they don’t have to reinvent the wheel in their state or area. We started with just three towns. Now, we have 38 towns registered and partnered with us. We don’t run them all. A lot of them, after their first year, just kind of take it and run with it. They see the value of showing this total action that we take together and reducing that waste to landfill.”

Some of these events are run by cities, park districts and schools. One year, a local Cub Scout group wrote notes and disseminated the information to neighbors. Those Scouts ended up collecting 300 pumpkins for the Pumpkin Smash. One neighboring town does a pumpkin roll, where participants start at the top of a hill and compete by rolling their pumpkins down the hill. Some high schools have come up with catapults to launch their pumpkins into collection bins. And one middle school in Plainfield, Ill., came up with tic-tac-toe games for the smaller orange and white pumpkins. While others have created games in which they bowl their pumpkins into collection bins.

“A lot of people thought no one would drop their pumpkin off when we first started this,” says McKeen. “But, when I drive by people’s homes after Halloween and I see pumpkins peeking up out of their garbage, that drives me kind of crazy. So, if you don’t want to leave a pumpkin out in your yard and let nature take its course, or you don’t have a compost bin in your backyard, or no backyard—for instance people in city townhouses, churches or small businesses—it’s really an opportunity to rescue a lot of waste.”

SCARCE, which is also a founding member of the Illinois Food Scrap Coalition, is on a mission to increase food scrap composting across the state and to raise public awareness about the full life of materials. Horak explains that every year, in an effort to better educate the public, SCARCE will put out a bowl of finished compost so attendees can see that it doesn’t smell.

McKeen also expressed the organization’s appreciation for the haulers that participate in these types of community events. “Very few of the haulers are charging any money to do this,” she says. “It does decrease what they have to send to a landfill, but it is a great way to participate in something the community cares about and to have your 20-yard dumpster or collection bin from Republic Services, or Lakeshore or whomever.”

Check out some of the images from previous Pumpkin Smash events. All photos are courtesy of SCARCE.