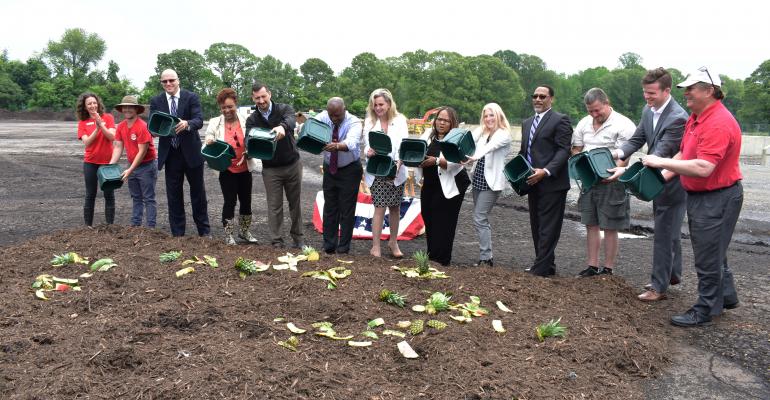 The expansion will allow the facility to process 57,000 tons per year.

Prince George’s County, Md., announced the expansion of its Organics Composting Facility, which will be the largest food waste composting facility on the East Coast once complete. Maryland Environmental Services (MES) is the operator of the facility, which is the only one in Maryland to accept residential, commercial and institutional food scraps. The facility currently processes 12,000 tons per year, and once the expansion is complete later this summer, it will process 57,000 tons per year.

Since 2013, it has grown from a yard trim only facility to a green waste and food waste composting facility. Sustainable Generation assisted the county with a food waste pilot project utilizing its SG Mobile System with GORE Covers in 2013. In 2014, the county increased this system from a three-heap pilot project to a four-heap, continuous process. It was so successful that an expansion to an eight-heap system was accomplished in 2016.

The facility is currently being expanded by adding a 12-windrow SG Bunker System with GORE Covers that includes in-ground trenching for leachate capture and reuse that will help to protect the Chesapeake Bay ecosystem. This covered aerated static pile system, with oxygen and temperature monitoring devices, enables the facility to meet an even higher level of environmental compliance with “in-vessel” performance without the high cost of enclosed buildings and biofilters. One of the facility’s first customers, the University of Maryland’s dining services, saves by diverting its food scraps to the composting facility rather than tipping in the landfill. The university also uses the final product from this process, known as LeafGroGold, a nutrient-rich, dark humus-like material, at its farm. This product, which is sold commercially in bulk, is in very high demand because it eliminates the need for chemical fertilizers, adds nutrients back into the soil and increases root uptake and absorption in plants. Revenue from the sale of this product is directed back to the county to help offset the cost of the composting operation.

“It has been extremely gratifying to work with this great team to introduce and master food waste composting and to be involved with this important regional growth,” said Sustainable Generation CEO Scott Woods in a statement.