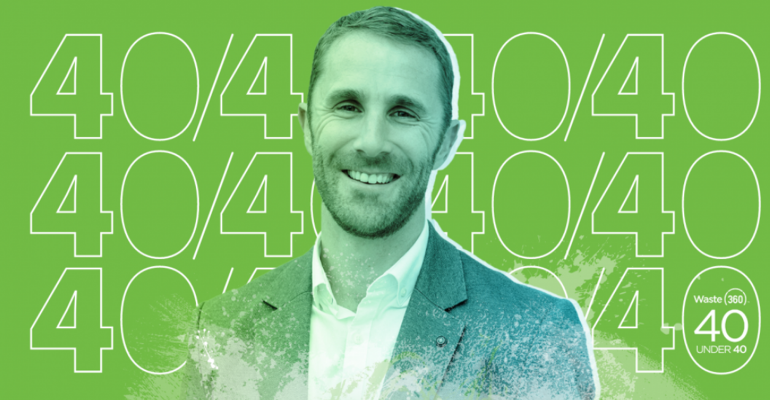 Ben Parry, CEO of Compost Crew, is on a mission to make composting and organics recycling commonplace in every community across the nation.

Ever since his friends, family and colleagues can remember, he has been laser-focused on building social enterprises that directly impact the health of the planet.

Despite leaping into the industry just five years ago, Parry has already grown Compost Crew to be one of the largest compost companies in the Mid-Atlantic region through his dedication to the well-being, vibrancy and self-reliance of his community. It's no surprise that the Waste360's 40 Under 40 recipient has taken his skills and values from decades of working in the solar and clean energy industry toward building circularity in his own backyard.

Waste360 recently connected with Parry to discuss his business and how composting should be an essential service across the United States.

Waste360: How did you become so involved with ways to make our planet more sustainable?

Ben Parry: I’ve had an intimate relationship with nature from a young age. I was raised on a few hundred acres of county park land. We had no neighbors, computers, smartphones or video games. I spent my childhood outdoors at the creek or in the woods. We had a garden and a compost bin. We picked wild berries and we hunted deer and small game. So, I built a deep respect and awe of our natural ecosystem. Eventually, I decided to literally make it my business to protect our planet and all the living things that inhabit it.

Waste360: How have you seen the concepts of sustainability and the circular economy evolve since you began your career?

Parry: These terms didn’t exist when I began my career. I was taught that the point of business was to “maximize profits for shareholders,” which is a greedy and shortsighted lesson. Now, the number of new circular economy ventures and other developments is dizzying. This is exciting, but we still have an uphill battle again entrenched interests that make it difficult to operate profitable businesses focused on building circular economies.

Waste360: What does it mean to build community wealth in a sustainable way?

Parry: We need to change the way we measure growth and success. We need our businesses and institutions to collaborate to allow people to earn a comfortable living while solving meaningful problems that will allow humans and all living things to thrive.

Waste360: How did you make the move from solar and clean energy to compost?

Parry: I spent over a decade with companies that were at the forefront of advancing the global clean energy industry. Solar rapidly moved from nascency to maturity in several markets, and I was happy to be a part of that. I’ve always been interested in organics recycling and composting. In fact, my high school science project involved testing how various types of manure affected plant growth. When the company I was with was sold in 2017, I decided to leap into a new industry and do my part of help build composting into a mainstream service.

Waste360: What skills have helped you advance circular concepts in your community?

Parry: We cannot build circular solutions if we reward winner-takes-tall approaches. We need to humbly collaborate with existing businesses, advocates and institutions in our community to advance circular solutions.

Waste360: What challenges and opportunities do you see to advancing composting and circular economy concepts in the United States?

Parry: The federal government spent over $5 trillion to fight the pandemic and support the economy. The government proved that when necessary, it can act decisively and pump an incredible amount of money into the economy. Meanwhile, hundreds of municipalities nationwide are applying for a handful of tiny $50,000 grants for community composting systems. We need to help our leaders in government get serious about directing significantly more money via grants and revenue contracts towards regenerative agriculture, composting and other circular practices.

Waste360: Where do you see Compost Crew going in the future?

Parry: Compost Crew has been growing ~40 percent per year, and we expect the trend to continue for the foreseeable future. We’re on a mission to eliminate food waste and revitalize the Earth’s soil through convenient and affordable composting systems available to all. We’re doing this by establishing turnkey food waste recycling programs for municipalities and communities with a focus on decentralized composting.

Editor's Note: This interview has been edited for length and clarity.