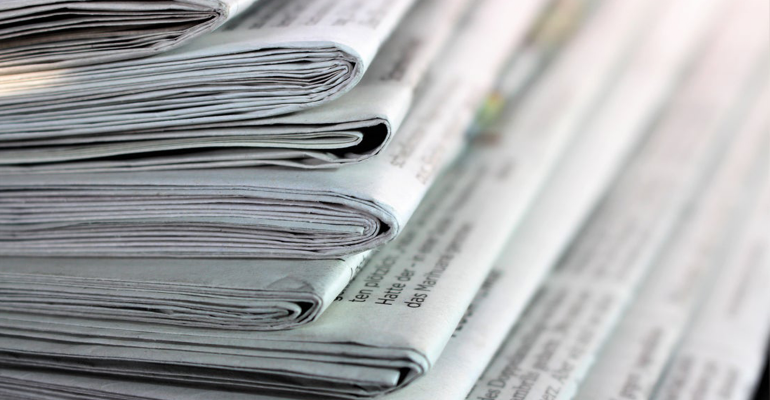 Mixed papers have historically been poor revenue producers for recyclers; the industry actually took a loss for years, but that trend has turned around. Mixed paper (as of mid-July) averages around $75/ton, with highs of $85/ton in Chicago and lows of $65/ton in the Pacific Northwest, according to Brent Bell, vice president of Recycling for Waste Management. The stats represent a strong comeback even since January when prices averaged about $35/ton.

Both domestic and some international markets are gaining momentum. Waste Management has a large export group that moves material to paper mills all over the world, although the amount that remains domestic has increased as new mill investments have started up, Bell says.

Here in the U.S. these mills are hungry for mixed paper, largely to capitalize on the uptick in ecommerce.

Paperboard, and old corrugated cardboard (OCC) in particular, has always been in high demand, but there’s been a shortage as ecommerce, and to an extent in-store ordering, booms. So mixed is stepping up to fill the void, and price goes with that new, robust demand, says Bret Biggers, senior economist, ISRI.

“The mills extract fiber to create new paper or products. And they are not limited to quality of fiber types, which is why they take mixed. It can be in the form of short or long fibers, high- or low-fiber content.  Mills grab as much fiber out of these bales as they can to make boxes, paper, and corrugated, and often do minimal to no sorting,” Biggers says.

The material is going into molded pulp products (like egg cartons), paperboard (for cereal boxes and similar packaging), tissue, and dunnage, (formed fiber to add cushioning to products during transport).

Manufacturers make a slurry, usually by adding chemicals to the paper to help separate the fiber, then create new paper from that fiber.

China’s crackdown on mixed papers is actually largely responsible for the comeback, ultimately forcing exporters to find new markets. Today the top importer is India who has invested heavily in mills that incorporate mixed paper into packaging. Canada is number two, and Thailand is the third top importer of these materials, reports Biggers.

But it’s looking like China may be back in the buyers’ market too.

“We are seeing signs that, while some of what is exported to these countries is staying there, some may be getting processed slightly and sent to China,” Biggers says.

Industry goes by ISRI specs for mixed paper, referred to as bale 54, which includes office paper, paperboard, and newspaper, among fiber-derived products. Paper content that does not meet these specs is limited to 3%, and prohibitives (material other than paper) are limited to 2%.

“MRFs typically have no problem meeting the specs. They have a process that materials flow through and different lines to separate different streams, though their capabilities may range,” Biggers says.

Their biggest problem now is in another area. MRFs are experiencing high turnover and having a hard time filling positions for sorting, separating, and preparing bales for shipping.

“That’s not uncommon, but it’s never been like this in recent memory. Seventeen months ago, these positions were filled,” Biggers says, adding some suppliers are having a hard time meeting manufacturers’ demand.

“Many MRFs can’t produce enough, partly because of the labor shortage.”

MARPAN, a recycler in Tallahassee, Fla., speaks of what’s happening in Florida

Mixed paper makes up about 47% of the material that the operation receives. It currently sells mixed bales for around $72 each, compared to $27 six months ago when demand first began to pick up.

“Market conditions remain strong with price increases for the last several months, and future increases are anticipated for at least the next couple of months. Paper mills continue to show strength with orders, which continues to create demand,” says George Loscialo, MARPAN’s commodities marketing manager.

Part of what is driving this activity in the Southeast, Loscialo surmises, is a trend where municipalities are terminating recycling programs due to the high cost of processing. Most mixed paper is generated from these facilities. As they closed, demand continued to increase, which caused the market pricing to also increase, he says.

Current pricing for mixed papers in that part of California is about $80/ton, including for transportation to local ports, says Sean Christian, supervising engineer, Solid Waste Operations, LA County Sanitation Districts. That represents a 167% increase in market prices compared to this time last year.

While the Districts don’t have pricing information from sales in other regions, he says the proximity to the two local ports in the Los Angeles area likely results in higher sale prices compared to some other areas because transportation costs are probably lower.

LACSD separates mixed paper from commingled recyclables and processes it through mechanical screens with optical sorters, then does a final manual quality control step.  The bales are inspected to identify contaminants.

“Prep work to remove contaminants is not new.  However, it is more critical than ever following China’s implementation of the National Sword and the related changes to commodity specifications around the world,” Christian says.

With consideration of the economy, and looking beyond one region, in June, the Federal Reserve Board revised its earlier real GDP 2021 forecast, increasing it to 7.0%, so the economy is growing fast in general, which in turn reflects on mixed paper, Biggers says.

His thoughts are that online buying and selling will likely remain strong. And the nature of this trade model can work in the industry’s favor.

“Ecommerce serves many different industries, but the packaging is the same. And that’s what’s driving mixed paper. Mills can’t get enough OCC to keep up. So MRF operators are finding good buyers at negotiated prices who keep coming back for more,” Biggers says.