During the past year, the national average price of post-consumer natural high-density polyethylene (HDPE) Rigids has remained quite constant.

In March, 2014 the national average trading price was in the 16 cents per pound range. That price level dropped slightly to an average 15.6 cents through the summer months, gradually rising back to 16.1 cents per pound in late December 2014.

In the new year, the price remained constant and actually rose slightly to the current 16.8 cents per pound effective March 13 (see graph).

It should be noted that the Rigids grade has remained very constant, in comparison to post-consumer Natural HDPE, which has experienced a drastic downward drop during the past year, from an average high of 56 cents per pound last summer to the current 27 cents per pound range. 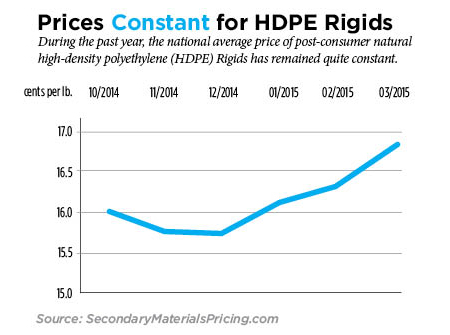 Gradually, the average price has risen to the current 22 cents per pound, effective March 13. This current price is now closer to the natural HDPE grade, now trading in the 26-27 cents per pound range. 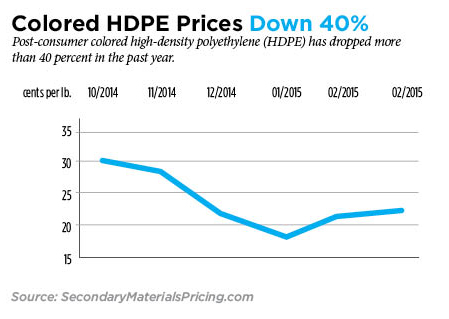 One year ago, the #8 PSI average trading price was in the $75 per ton range. This represented a fair return for baled tonnage picked up at most recycling centers. In June, 2014 the average price dropped to $74 per ton, and by December 2014 it settled in at $68 per ton.

Since January 2015 the average price has continued to drop another 9 percent to the current national average of $62 per ton. During the past year, this represents an overall price drop of 18 percent (see graph).

Meanwhile, prices for most post-consumer (PSI) high grades also have started to experience a slight drop during the past month. 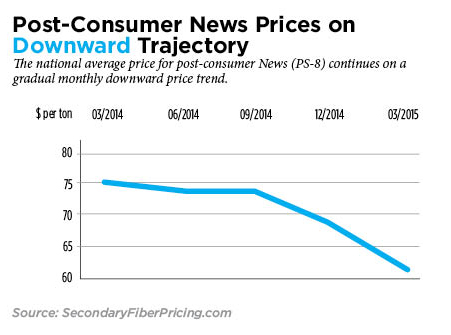 Robert Boulanger is currently president of Recycling Markets Ltd., and director of the Commodity Pricing division. He has extensive experience in the operation and management of recycling plants, and is a long time publisher in the recycling sector. For more than 30 years, the company and its affiliates have focused on the management of company databases and commodity pricing for the Recycling Industry.

In 2002, SecondaryFiberPricing.com was developed as the first industry online format to publish real-time pricing for 18 PSI grades of recyclable paper.SecondaryMaterialsPricing.com was launched in 2004 for post-consumer Plastics, Cans and Glass. Online Members have instant access to more than 10 years of historical data.