Since early September 2014, the national average price of post-consumer natural high-density polyethylene (HDPE) has been on a steady downward trend. Over six months ago, this ‘in-demand’ material was trading at a high of 56 cents per pound.

That price level was maintained through the summer of 2014 until late September, when it started to drop progressively by more than 25 percent, toward the 42 cents-per-pound level. By December 2014, the price had dropped another 25 percent, to an average of 33 cents per pound.

In the new year, the price continued to drop steadily by another 25 percent, to the current national average low of 24.6 cents per pound (see graph).

Similarly, the national average price of post-consumer color high-density polyethylene (HDPE) also has experienced a 40 percent downward slide, from an average 30 cents per pound in September 2014 to the current 18 cents per pound. 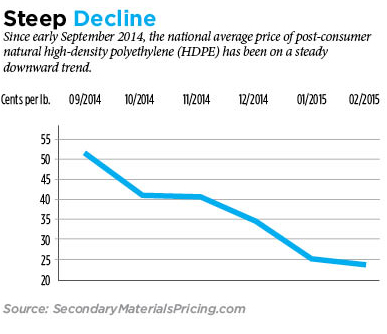 Although not quite the drastic 52 and 40 percent, respective six-month drops experienced by post-consumer high-density natural and color polyethylene (HDPE) grades, this still parallels the overall downward market trend of most post-consumer plastic grades. 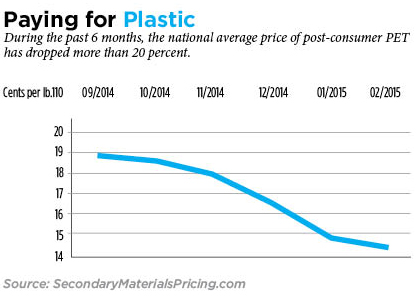 Over the past year, the #11 PSI grade has dropped more than 36 percent from a national median average high of $127 per ton as reported in February 2014, to the current average low of $81 per ton.

During the fall months in 2014, the national average price had levelled off at $97 per ton. However, this month domestic mills dropped their average buying price by another 16 percent, to the current average $81 per ton.

Meanwhile, prices for most post-consumer (PSI) high grades have remained relatively constant during the past year. 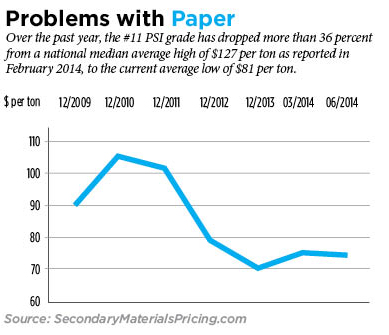 Robert Boulanger is currently president of Recycling Markets Ltd., and director of the Commodity Pricing division. He has extensive experience in the operation and management of recycling plants, and is a long time publisher in the recycling sector. For more than 30 years, the company and its affiliates have focused on the management of company databases and commodity pricing for the Recycling Industry. In 2002,

SecondaryFiberPricing.com was developed as the first industry online format to publish real-time pricing for 18 PSI grades of recyclable paper. SecondaryMaterialsPricing.com was launched in 2004 for postconsumer Plastics, Cans and Glass. Online Members have instant access to more than 10 years of historical data.