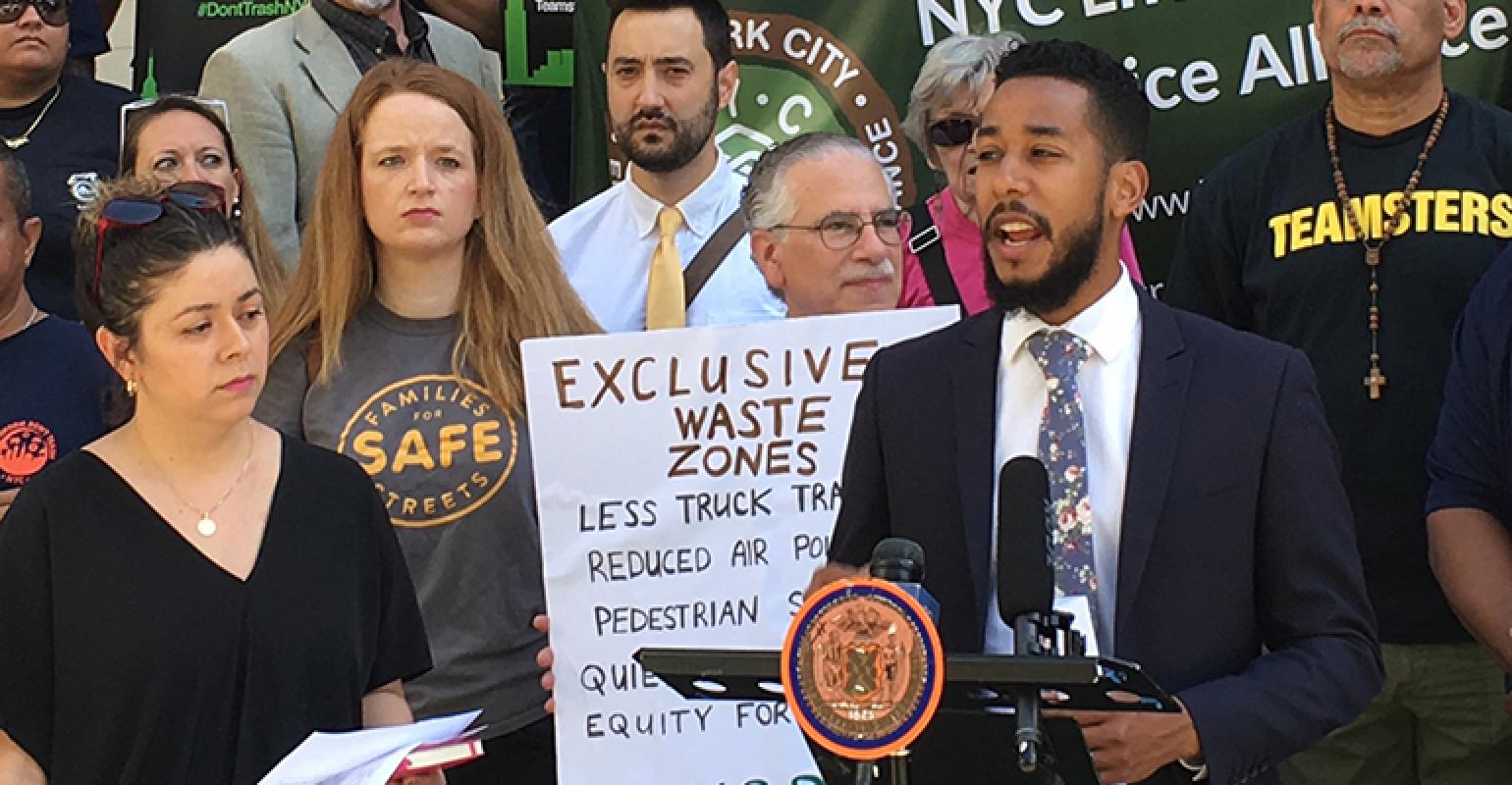 The latest version of the bill divides the city into zones in which a maximum of three waste companies can operate.

According to POLITICO, Council Member Antonio Reynoso, chairman of the Committee on Sanitation and Solid Waste, said the latest version of the bill includes several key changes from the original bill unveiled earlier this year. It advances a non-exclusive zoning model, dividing the city into zones in which a maximum of three waste companies can operate, and creates incentives to switch to more sustainable vehicles and haul trash to more reputable waste transfer stations. There are also provisions to increase public safety training requirements for sanitation workers and authorize the City of New York Department of Sanitation (DSNY) to set a minimum rate waste haulers can charge customers.

“After six years of studies, hearings, stakeholder meetings and legislative drafting, our broad-based Transform Don’t Trash NYC coalition has reached conceptual agreement with the City Council leadership on legislation that, if enacted as proposed, would transform the way commercial waste is collected across every city neighborhood,” said Eric A. Goldstein, NYC environment director at the Natural Resources Defense Council, in a statement. “Thanks to Councilmember Reynoso and [City Council] Speaker [Corey] Johnson, this landmark bill, if enacted as proposed, will slash garbage truck traffic, cut air pollution, improve pedestrian safety and ensure fairness and respect for private waste company workers.”

Back in May, Reynoso introduced his version of a bill to create a citywide commercial waste zoning system that would authorize the city to create a commercial waste zone system that would divide the city into at least 20 zones with each zone serviced by one carter. This was much different than the plan initially unveiled in 2018 by DSNY, which stated the city would be divided into 20 zones, each served by three to five carters selected through a competitive process.

The latest legislation aims to create a competitive bid to assign private carters to collect waste in each commercial district, cutting private garbage truck traffic by more than half across the city. Private carters will need to meet baseline standards to be eligible for a zone and their proposals will be judged based on their plans to improve safety, recycling, pollution and job quality. The revised bill caps the number of private carters in any zone at three.

“Private sanitation workers and the Transform Don't Trash NYC coalition fought for years to reform the commercial waste system, and today we can see light at the end of the tunnel,” said Sean Campbell, president of Teamsters Local 813, in a statement. “We negotiated this framework to end the race to the bottom that holds down wages and endangers workers of color. Going forward, companies that provide good jobs will thrive and those that mistreat workers will not. The City Council needs to pass this legislation so we can finally start creating good jobs in recycling and composting that will support New York City families.”

Critics, however, claim the plan isn't new and that the original DSNY plan had not been subjected to adequate public transparency.

“The report that a new commercial waste zone bill is being finalized is not new; Council sponsors of the ill-fated ‘monopoly zone’ bill have been scrambling behind closed doors to assemble a Plan B,” explains Kendall Christiansen, executive director for New Yorkers for Responsible Waste Management, a consortium of 25 locally owned and operated waste service providers. “While its details remain unknown, the report suggests ideas that have not been vetted are being added as sweeteners, as well as incorrect data—in fact, just 30 carters do this work, not 90."

In a statement released on October 10, the Transform Don’t Trash NYC coalition claimed that more than 90 private carting companies operate throughout the city, "creating needless pollution and dangerous truck traffic."

“Unfortunately, the original DSNY plan itself has not been subjected to a full public airing, despite its 50-year implications,” adds Christiansen. “If its sponsors believe it’s so great, the Council should immediately agree to at least one round of public hearings before adopting something that could lead to chaos, uncertainty and great risk that the basic job itself—picking up 12,000 tons of waste and recyclables every night—won’t get done as even more companies exit the industry. Continuous improvement would make a difference sooner, better and cheaper than this massively complex and misguided effort.”

Throughout the years-long process, critics have continued to express their concerns about whether franchise zones are the right choice for New York City. They've also pointed to problems with fees and accountability associated with the implementation of RecycLA, Los Angeles' waste zone franchise system.

According to POLITICO, Reynoso emphasized that the version of the bill being released on Thursday is a draft and will provide an opportunity for groups to weigh in on the changes before it’s codified into an updated version that will go for a final vote. The bill must be voted out of the Sanitation Committee before it goes before the full Council. A committee hearing hasn’t been scheduled yet, but Reynoso told POLITICO that the Council is working on a timeline to have the bill passed at its October 30 meeting.

Waste360 will continue to update this story as more information becomes available.