Last year San Jose, Calif., was looking at a goal of 100-percent waste diversion from landfills by 2022. But with a commercial recycling rate at the time of just 22 percent, city officials knew something had to give.

San Jose adopted its Green Vision goal in 2007, and the residential rate had hit 80 percent by 2012.  But the planning on the commercial side began in 2007 as well. “That goal really helped us gain focus and momentum on how to improve this particular sector,” says Kerrie Romanow, director of the San Jose Department of Environmental Services.

The biggest problem for the 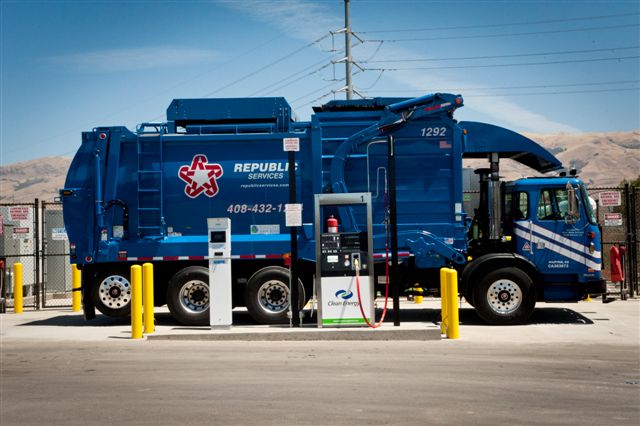 city was it had an open market system for commercial hauling, which resulted in 20-25 haulers operating in the city. “We were seeing a lot of trucks on the road and rates all over the map and a variety of services but very little incentive to actually recycle,” Romanow says, “because it was more work for the haulers and the rates wouldn’t go down (for the customers) if they recycled more, so it was just as easy to not recycle.”

The city settled on Phoenix-based Republic Services Inc. as its exclusive commercial hauler. “The benefits to the city are enormous,” says Gil Cheso, Bay Area municipal relationship manager for the company. “You have one truck, not multiple trucks, saving on wear and tear on the streets.”

Also to improve the area’s environmental footprint, San Jose sought a commitment from Republic to convert its area fleet to compressed natural gas (CNG) vehicles. Republic has since added 65 CNG waste and recycling trucks for the market.

To handle the anticipated significant increase of material, Republic undertook a major upgrade of its material recovery facility (MRF) in nearly Milpitas. Republic calls the renovated facility, which can process 110 tons per hour of commercial and residential single-stream materials as well as dry and wet commercial recyclables, the largest recycling operation in the world. Eugene, Ore.-based Bulk Handling Systems put in the system. Truck routes were altered to fit with the new facility.

Romanow says Republic did face some challenges during the first couple months as the facility was getting up to speed, but the company worked hard to make sure the operation was separating properly. She says Republic invested $50 million in equipment.

To improve commercial recycling for San Jose’s 8,000 businesses, Republic came up with a two-container wet/dry sort program. Wet items, including organics, food-related waste and landscape trimmings go in one container, and everything else in the other. “That really helps us separate out the organics,” Romanow says. “A lot of our increased diversion is coming from that.” 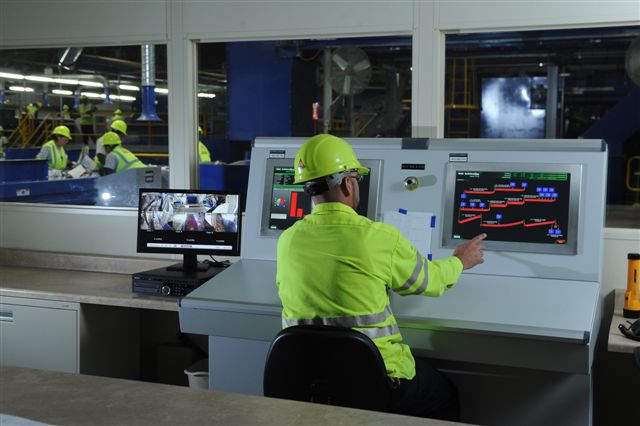 For Republic to make the substantial investment in the MRF renovation and CNG fleet, it needed a long-term commitment. The agreement with San Jose is for 15 years. “You need a partnership with the city for a long-term contract,” Cheso says. “Part of the key to get this kind of diversion is to be both hauler and processor.”

For the city’s part, dealing with just one hauler allowed the two parties to more clearly set expectations. For one, Republic took responsibility for informing the individual businesses about the need to recycle. “That really makes it happen because I just can’t talk to every restaurant,” Romanow says. “We’re not going to send people out to inspect trash cans. Instead we put it on the hauler and they do back sorting, which is much more efficient.”

Romanow says business customers now have generally embraced the program, but there was some resistance at first. “They were skeptical about the city coming in and managing the system,” she says. “They liked the system they had and didn’t see a reason to change.”

And businesses need to learn new concepts like avoiding contaminated glass, understanding what material goes in which container, etc. Cheso gives the city credit for beginning its outreach education five years ago when the Green Vision goal first emerged.

Romanow says as a result of the changes some customers are paying a lot more, and some a lot less. About 46 percent of the businesses had higher bills, and 54 percent lower fees. Many of the problems are easily fixable. Some had much bigger containers than they needed; others were getting service but not paying for it. The city will do a rate adjustment this spring, with the goal of not increasing fees significantly.

“We’re working with Republic, individually helping customers understand what they can do to influence their rate,” she says. “They can do more sorting and get a small bin. Most are really taking advantage of that because why wouldn’t they want to reduce their bill?”

Cheso says as Republic’s taken over the accounts indentifying the correct contact person has been a challenge, as well as the right time to contact them. “You can’t go to a restaurant between 11 and 2, because they’re working.”

Republic’s local website has been helpful in educating customers, but it takes more than reminders. “You’ve got to make sure they’re putting (the materials) in the right bins; you can’t just keep dropping off fliers,” he says. 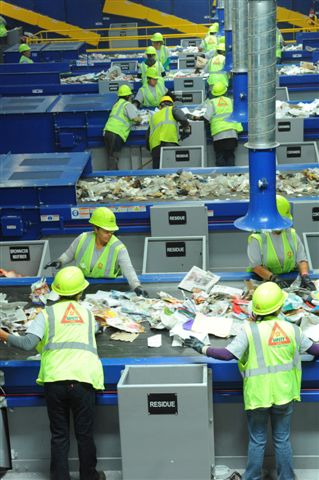 Sometimes it’s a simple fix. “We’re encouraging businesses to use clear plastic instead of black. It’s the same expense. But when the bag’s on the processing line people can see what’s inside of it.”

More help is coming. Lafayette, Calif.-based Zero Waste Energy Development is building the first commercial scale dry fermentation anaerobic digestion facility in San Jose, which is scheduled to open late this year. Zero Waste will convert the organics portion of the commercial waste collected to energy. “This will make our system even better when it’s up and operating,” Romanow says. Zero Waste currently is composting the organic material that’s being diverted.

Romanow says the success San Jose has had in commercial recycling could happen anywhere. “We’re glad the model is working, and that should drive down costs as more cities move toward that model.” Cheso says officials from Los Angeles are coming to take a look at the program.

But he adds that a strong partnership between the city and the hauler is key. “If you’re not partnering with a city with that vision it won’t happen. There needs to be a commitment on all sides.”

And a strong existing relationship also helps greatly. “We’ve been a hauler here for a long time,” he says. “They were familiar with us.”

Romanow gives credit to Republic and Zero Waste as partners, and also city officials “who took some bold steps in a bad economy.”  In addition, the city is using facilities sited within the city. “We’re really making it work here. That certainly helps.”

With the city’s residential recycling rate already in the 80-percent range, Romanow believes San Jose will be comfortably over 80 percent commercially by July 1. The education and fine-tuning will continue as the city aims toward 100 percent, a figure that sits a long way from San Jose’s former commercial recycling rate. “Frankly we should be ashamed of ourselves for the recycling rate that we did have,” Cheso says.